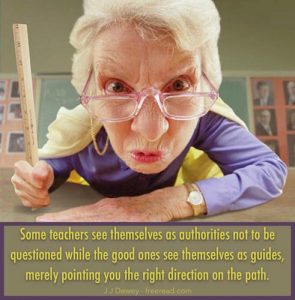 A reader comments: I have heard others on the Keys use the term “earned authority” to mean that after they have had enough soul confirmation, then they will automatically believe the teacher no matter what he says, and feel that it is no longer necessary to verify it.

JJ: In the five years I have been teaching here I do not recall anyone saying this. I would be interested in seeing the reference if you have one. For one thing, if someone did say such a thing, I would immediately offer a correction.

Reader: It seems to me, and I think this is what you are saying, is that one should ALWAYS seek verification, and that by an “earned authority,” you just mean someone whom you trust more and give “greater weight” to his words, and, therefore, you are more likely to take his teachings seriously and seek confirmation, than you would with a new teacher or one who had proven himself to be less than trustworthy?

JJ: One should test (numerous times) the prospective authority with one’s own soul as well as any external evidence that may be available. If the teacher consistently measures up then you do not have to painstakingly examine every word he or she says, but you can begin to learn on automatic pilot as long as you feel at peace with your soul. No matter how strong the earned authority is, you always have the soul at work in the background and when the red flag goes off you then closely examine the words of the teacher on the matter with the same detachment as you would anyone else.

You might note that DK is an earned authority with me and I have my mind on automatic pilot as I learn from him. Once in a while a red flag goes up such as in his statement concerning the sharing of national resources which I believe to be literally incorrect. Because he is an earned authority, I give him the benefit of the doubt and believe that if I could talk to him and have him bring clarification in light of current evolution that his words would harmonize with my soul.

I will therefore give his words reasonable weight even if there is a possible flaw in them – just as I would an Algebra teacher who knows more of the subject than I do.

However, once an authority is proven, if for instance, you learn Spanish from a teacher and you know that he knows Spanish and you ask him the Spanish word for “rock” or something, and he tells you, you can have quite a bit of faith that he’s come up with an accurate word because you’ve tested him. So, relying somewhat intelligently upon an earned authority is not relying on beastly unearned authority. However even if we have a true teacher and we rely on him with blindness without checking him out and giving him enough tests to assure us that he guides us in the direction of soul contact, then a true teacher, whether he be a Jesus or a Buddha, can become a beastly authority to us.

Return to the Laws

We left off a while back talking about the subsidiary laws to the Law of Economy. They are:

We talked about the Law of Vibration and the Law of Adaptation. The next in line is the Law of Repulsion. This law is mentioned eight times in the Alice A. Bailey writings.

First, see if you can find them and then explain what this law is. I will comment as needed.