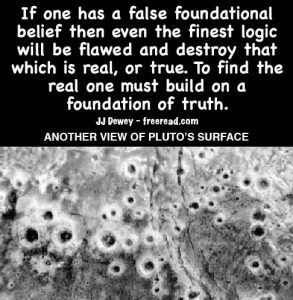 Thanks for your strained reasoning on why you think Crème is right. It is amazing to me that you do not even consider that he may be wrong.

Here seems to be the crux of your argument. Mankind has increased (according to Crème’s figures) by a factor of 125 not because people come back and progress but because new and more advanced souls have been coming in during this whole 4000 year period. These advanced souls dramatically increase the average.

The only problem with this argument is that there is no evidence to support it and you have offered none. It is reasonable to suppose that there are some advanced souls coming into incarnation that have not incarnated for a very long time, but it is illogical to assume that enough of them have been born over the past 4000 years to multiply Crème’s advancement factor by 5 times from 2000 BC to 1 AD and by a factor of 125 from 2000 BC to the present.

There are four provable reasons for this.

(1) Thousands of people doing regressions reveal that most people here at present are not new souls but have incarnated several times over the past 4000 years. One rarely gets a subject that is a new advanced soul just coming on board here in this life.

(2) To create this quantum leap forward would almost require a replacement of past souls with new more advanced ones.

(3) DK tells us that the population explosion has been forcing entities to incarnate more frequently.

(4) There was a very large population during the Lemurian age. DK tells us:

“The great original sin in Lemurian times was sexual in nature, and due largely not only to inherent tendencies, but to the extraordinarily dense population of its civilization and to the close relation of the animal kingdom. The origin of the syphilitic diseases traces back to these times.” Esoteric Healing, Pg 228

Now if there were billions of entities at that time who evolved right here on the earth, and not the moon chain, then one would think that the dramatic increase of population would pull from this pool of souls as a top priority.

If this were the case (and it is most probable that it is) then there would be a current influx of lesser evolved souls and not higher ones as you assume.

When you look at average humanity and study that which motivates them you have to wonder. About half of the world today does not even believe we went to the moon.

Reader: I realize how dangerous different information is to you, because if a few pieces of your puzzle-of-thought are changed, the effects are exponential and the picture looks different from what you thought.

JJ: Not dangerous at all my friend. Bring it on.

By the way, if anyone in the group sees any logic in your posts that I have missed feel free to enlighten me.

I thought I would give a few more comments on the total number of lifetimes. DK has made another statement that I quoted yesterday saying that we live “millenia of lives,” and then in another place that we progressed through “many thousands of lives.”

Now when I came across the thought that each one of the 1000 petals in the head represents an incarnation, I felt through the soul that there was truth behind this. I didn’t sense there each person lived exactly 1000 lives before liberation, but that each petal represented a step in the progression of the human being that would take a typical lifetime to transverse. Some may make the journey in 800 lives while others may take 1200.

If this is the case then where does the “many thousands of lives” come in?

The thousand lives represents the journey of the soul as a self conscious human being with a head center of 1000 petals in this solar system. But we are eternal and have lived many other incarnations in other forms in other systems macrocosmic and microcosmic. Our total number of lifetimes in the various forms would be many indeed.

Let me tell you the difference between your relationship with Benjamin Crème and yourself and the people of this group and me.

When Crème speaks you believe without question. When he says something that does not seem logical again you do not question. Instead, you make excuses as to why that which is not logical could be true if certain improbable chain of events or circumstances were in place. You have an absolute authority – Crème – who claims to speak for Christ, which makes questioning him like questioning the Pope or God is to a Catholic.

When I give out information which does not seem logical, the people of this group challenge me. Those who are currently some of my strongest supporters such as Larry, Susan, Blayne, Glenys and others challenge me whenever I say anything that sounds fishy. I am questioned because I speak with no proclaimed authority. Readers are left to the greatest authority of all which is their own souls.

If Crème tells you that Christ will appear on a certain date in a certain way and nothing happens you do not question because this is like questioning God for you. Instead, you make excuses.

If Crème says that the Saddam Hussein captured is a double you believe even though his identity is proven by DNA and has now been definitely identified by his wife and daughters.

If Crème says that Al Quada had nothing to do with the bombing in Spain you believe him even though the evidence supporting this is now overwhelming.

If Crème says that Jesus appears as a Taxi driver you see no reason to see anything strange in this.

Your reasoning in accepting all these improbable things is similar to that of the fundamentalist Christian who believes the universe is 6000 years old because his religious authority tells him so.

You ask him – what about the dinosaurs who were here long before 6000 years?

“The devil planted those dinosaur bones to deceive us,” he replies.

Now can we say that there is a 100% probability that he is wrong? It sure seems that way to any logical thinking person, but when you consider all possibilities it is remotely possible that there are some type of sinister beings at play planting bones and having a good laugh at our expense.

Then one replies, “but there are galaxies billions of light years away and their light also took billions of years to reach us. How could this be true if the universe is only 6000 years old?”

The fundamentalist responds. “You don’t understand. The speed of light has slowed down. When the universe was created light traveled so fast that it permeated the universe quite quickly. Then it slowed down and is still slowing down. As proof we see that the first measurements of the speed of light show that it was faster than it is today.” (Of course, he fails to mention the accuracy was not as great back then either.)

Can we prove absolutely that the fundamentalist is wrong here? No. We did not have scientists here at the creation of the universe to measure the speed of light.

Then we ask him about dating with carbon 14 and other radioactive decay that can date back millions of years.

“Oh, that is flawed also,” he says. “Radioactive decay has also changed since creation.”

Is this possible? Yes, but very remotely so. Should I jump on the bandwagon and believe it just because religious authorities say it is true?

Because the standard scientific view of the speed of light, radioactive decay and dinosaurs is much more logical and it would be silly to accept otherwise without reasonable proof.

You present Crème’s materials and then present data backing it up that could make it true if some very improbable things happened.

Yes, the average person could be 25 times more advanced than in the days of Jesus if some fanciful things have occurred, but no logical person will accept this just because some guru says a master has proclaimed it.

If someone wants to convince us the universe is 6000 years old, he must do more than proclaim a religious authority or that “it could be true.”

You must do the same.

Readers must take all teachings and test them against true principles which are verified by their souls and make up their own minds.

“And on the tide of my present endeavor, my argument has been vindicated.”

If your argument has been vindicated then you would think that one of the many members here would see it. So far I haven’t heard from one who has. This should tell you something.

“I can win an argument on any topic, against any opponent. People know this and steer clear of me at parties. Often, as a sign of their great respect, they don’t even invite me.” Dave Barry