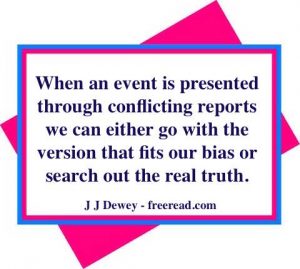 Several have questioned my wisdom concerning the recent dialog with the Crème supporter There are several reasons they question this.

(1) Benjamin Crème has been discussed before.

(2) Some do not like the conflict of discussions of disagreements at all.

Let me make a few comments on these points.

(1) Benjamin Crème has been discussed before. While it is true that we have discussed Crème before; in this round the Crème supporter led us into discussions where new ground was covered. True some details were repeated, but a considerable amount of new material and teachings were added.

I think some just tuned out thinking that there was nothing new, but I assure you that in most of my posts on the subject that new teachings were added. I think some missed important ones because of the feeling that only a rehash was being offered.

(2) Some do not like the conflict of discussions of disagreements at all. If a Keys member does not like the idea of confronting illusion then he is in the wrong group. When an illusionary idea is presented that I believe the majority of the group already see for what it is, or if it has been covered before, I will usually not comment. But if someone presents an illusion which would be beneficial to many to dispel then I will tackle it. When this occurs it can sometimes be handled with a post or two. Other times it may take a half dozen or so.

The illusion which to which the greatest attention was given is the idea that duality can easily be bypassed by basically believing you are centered in some non dualistic point, sometimes called the great void.

Because this illusion is so widely circulated and effects so many new agers it was covered from many angles.

Now when a student brings it up we can just refer him to the archives.

When I teach I attempt to not offend the various religions and philosophies by mentioning them by name, but generally will comment on specific trends of thought and teachings and then comment. Generally, I will only mention a specific movement when someone on the group brings it up. If someone brings up a name such as Benjamin Créme then I will comment if I feel clarification is needed.

I’m sure there are more Benjamin Créme readers here than have surfaced. The are also students of Ramtha, Elizabeth Prophet, standard Christianity and many other teachers. A lot of these teachers, including Crème, teach some great truths and stimulate many to search and discover. Students of all beliefs are welcome to stay and will not be judged unless they attempt to judge or convert us to what I see to be illusion.

Our friend began this exchange by extolling the virtues of Crème, posting an article from him, while mentioning we were in denial about him. This demanded a response and led to the exchange.

Any quote from any source is welcome and will probably not lead to conflict if it is the idea that is the focus and not the man behind the idea. I certainly hope that no one is telling other groups that they need to believe my teachings because I am JJ Dewey. On the other hand, if they quote me and let my words stand for themselves I am happy with this.

Keep in mind here that the current topic is illusion.

Tell me this. In which situation will you learn the most in a cake-making class?

(A) Studying the theory and creation of cakes.

(B) Actually making some cakes and then tasting them after the work is complete.

The answer is obvious as far as cakes go (which is of course B) but is not so obvious when it comes to metaphysics-philosophy-spirituality.

In these categories the line of least resistance is to dwell on theory and that which cannot be proven. Then when we come to actually applying something we find (as we do with making a cake) that we must supply specific ingredients, heat and timing etc. Finally when the work is complete we must taste the whole to see if the work is good.

Here is something I find interesting. We have gone through a number of conflicts (related to teachings) that have generated considerable impatience and complaints from readers. Many felt we were spinning our wheels.

But then what part of the archives do you suppose is the source of some of the greatest praise I receive from new readers?

Right. It is these same writings where conflict seemed wearisome to current readers. In other words, when the cake was done and was tasted by newcomers the taste caught their interest.

As usual the second key of judgment must be used. It is certainly possible to overdo things and this must be avoided. I attempt to feel out when the recipe is complete and then leave the cake alone to bake. Your comments are always a big help here.

In other words, isn’t it a sign of tolerance to just live and let live as far as differing philosophies go?

Yes, it is, but live and let live has different interpretations by differing people.

For one thing, most of those with who I have had conflicting dialog have not felt that I have interfered with their ability to live according to their will. Anyone can follow any belief system they desire and yet be a good and accepted member of the group. The live and let live philosophy is an important ingredient of our direction here. This does not mean that members are not free to question me or any other member when they make a statement that makes no sense to them.

If we are not allowed to question and to clarify then we will not learn much more than unusable theory.

Overall Benjamin Créme is probably a more important person to examine than meets the eye.

One evidence of this is the statement by Glenys that in many metaphysical gatherings quite a large number are Crème followers. Now the people that come to these gatherings she mentions are thinkers and often people of influence, far above the typical new age connoisseur. Many of the Crème followers are very bright and have real potential to prepare the field for the coming of Christ.

If therefore Crème is right then indeed it would be important to pay attention to his message so the lights could join forces and aid the Christ in his preparations.

But if he is wrong then what?

Then you have a large number of intelligent seekers and disciples diverted into looking for him where he is not and making preparations for something other than Christ.

And what is that “something other?’

Some think it is an antichrist, others a false teacher and still others just a diversion sponsored by the Dark Brothers to hinder the work of light as much as possible.

Whatever the case, because of what is at stake it can only be helpful to at least get the basic pros and cons of Benjamin Créme before the seekers so they can run them by their own souls and make up their own minds. Many of those who investigate Crème only get one side of the equation. The ground that we have covered and will make available in the archives will be helpful for the pilgrims that wander through them. And it is interesting to note that many people read the archives who never buy my books or come to this group.

It’s getting to the point now that most of the time when I do a search on a spiritual topic that something from the archives comes up near the top.

This is one step we have taken to reach the public that is on its way to the envisioned success.

“If thee marries for money, thee surely will earn it.” Ezra Bowen