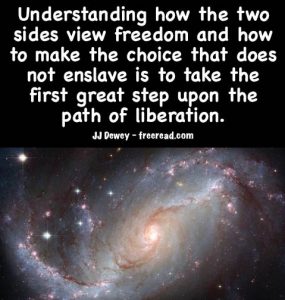 We have been talking about a controversial statement made by DK that seems to go against the grain of many seekers and libertarians.

Here was his prediction of the coming age:

“National material assets and the needed commodities will all be provided for under an entirely new system. – Private enterprise will still exist, but will be regulated; the great public utilities, the major material resources and the sources of planetary wealth – iron, steel, oil and wheat, for instance – will be owned in the first place by a governing, controlling international group; they will, however, be prepared for international consumption by national groups chosen by the people and under international direction.” Externalisation of the Hierarchy, Page 581

The scary thing here that concerns students of economics and history is that commodities such as “iron, steel, oil and wheat” will be under a “controlling international group,” that will apparently regulate distribution to the nations and peoples of the world.

This conjures up images of the failed Soviet Union that micromanaged distribution and went bankrupt in doing so.

Does this mean that DK was just out of his mind on this point?

There are a couple points that are overlooked here by students and the main one is this. DK here is not presenting his ideas on ideal economics and government nor is he endorsing this system he is writing about.

What is he doing then?

The answer is he is predicting the future. He is telling us where the economic systems of the world are headed in the coming age. He doesn’t tell us whether or not he thinks this coming system is in agreement with what he would come up with if he were in charge or if he thinks it will be completely benevolent. What he does state that he agrees with is people will come to a greater understanding of the principle of sharing, but this will not be a cure-all:

He says, “The world will still be full of selfish and self-seeking people, but public opinion will be such that certain fundamental ideals will motivate business, being forced upon business by public opinion; the fact that the new general ideas will in many cases be governed by the expediency of interplay will not basically matter. It is the sharing that is of importance.”

When will this controlled distribution system manifest? He gives several clues. It will be in a time in which:

(1) The principle of barter and exchange will control economics

(2) He indicates that atomic energy would give us unlimited power changing our attitude toward money.

(3) The attitude of sharing and aiding the less fortunate will be a keynote.

This tells us that the fulfillment of his words are still some time in the future. However, it is interesting to note that the developed nations share much more now than they did in the first half of the last century when DK did his writing.

After World War II the United States gave away many billions in rebuilding Europe and Japan. After the fall of the Berlin wall West Germany took East Germany under its wing and helped it back to prosperity. Whenever there is a disaster the wealthy nations immediately step forward to help, even if the assisted nation views them as the enemy. Two examples: Iran (in 2004) with the recent quake or North Korea in dealing with the great train wreck.

There is more sharing between business and labor. Ordinary workers are given generous vacations, sick leave, insurance benefits and stock as well as stock options.

So, according to DK this application of the sharing principle will only increase and will lead to many changes.

He tells us that we are headed toward a centralized control of the earth’s resources and I must admit that for good or bad the peoples and nations of the earth have been headed in this direction with no end in sight. Unless there is some shift in momentum it does indeed look as if his prediction will come true.

The problem with independent souls looking ahead is that if past efforts at central control, are any sign then we should be wary indeed of a giant world-wide one manifesting in the future.

But consider this correspondence. The nations of the world are at a point in relationship quite similar to that of the thirteen colonies in America before a central government was established. In that age the states did not trust each other and there were often conflicts, border disputes, religious, economic and ethnic warring. There was a constant fear that one state may make war against another and trust was low.

If a master teacher would have made a prediction to them of a future controlling central government that would regulate the states so war between them would be improbable they would have been appalled and an image of a dictator would have loomed in their minds.

While it may be true that some of their fears may have been justified there are many benefits of the current system that would have not been foreseen by them.

Are most people happy we have a United States instead of many little conflicting countries? Most are.

Even so, if we can create a united world of cooperating nations we will, in several hundred years, look at what we have and be happy with the progress and not want to return to the past.

This will be our fate if freedom, light and love prevail. If the world allows those who do not love freedom and seek to control the minds of men to obtain power then the fate of the world will be gloomy indeed.

But do not forget. There is an eternal law called “the Law of Dominating Good” that manipulates circumstances so in the end a good result is obtained through the guiding intelligence of the human race.

DK was making a prediction, not necessarily a statement of how he thinks things should be. It is indeed a very probable prediction. The job of the lights of the earth is to also to examine the trends of evolution and instead of letting others with selfish intent jump ahead and lead the parade, the servants of the race must guide the current of human events so good will dominate and the freedom that seeks expression in the human breast always has place to expand and move.

Insanity in individuals is something rare – but in groups, parties, nations and epochs, it is the rule. Friedrich Nietzsche (1844 – 1900)