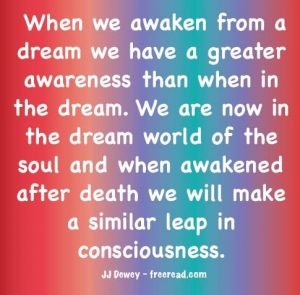 Anni asked some questions for a lecture series she is participating in so I thought I would share her answers here.

Anni: 1. Chapter 1 (page 1 when printed) you write: “In order for the ONE to manifest, It had to become the MANY. To manifest, the ONE Decision reflected Itself from the Prime Cause. Because the Prime Cause is infinite, the reflection was infinite; and infinite points of Decision filled and created all space….”

My question: But did not the reflections CREATE space as you said first? Or is it because “time” has not been created yet that this seems contradictory?

JJ: First I have a correction on my wording. Where the word “infinite” is used it should be worded “unlimited,” to be technically correct.

When the unlimited reflection occurred innumerable points of creation were mapped out in the imagination of God (for want of a better word) and these points began to vibrate together creating the first great wavelength which was one wavelength composed of innumerable points. – thus the one life and the many.

DK talks about the point of nothingness, or pralaya, that many have discussed on the group and says this about it:

“From the higher vision, that sees the subtler continuously overshadowing the dense when not in objective manifestation, pralaya is simply subjectivity, and is not that ‘which is not,’ but simply that which is esoteric.” Esoteric Healing, Page 419

The higher realms and formless worlds are esoteric to us now but shall not be when we are there.

Anni continues: 2. Chapter 1 (page 2 when printed) you write: “At the same non time that Purpose was created the vibration of Light and Love was manifest within the originating wavelength. Light and Love and Purpose exist for eternity beyond time in the Eternal Now.” Chapter 2 (page 1 when printed) you say: “We shall pay particular attention to Light and Love, for they are the root cause of the great illusion that separates, or appears to separate, man from God. Both Light and Love have beginning and ending points and all things with a beginning and an end are illusion. However, they are from an eternal source; thus, they manifest periodically for all eternity, but such manifestation always has a beginning and an end, and is therefore illusionary…”

My question: How can Love and Light have beginnings and endings if they were created before time? When were time and space created? Not until the wavelength of Purpose vibrated on the Buddhic plane and created time and space on the mental plane? Or?

Form as we understand it is not created until various wavelengths gather into groups and circle and spiral around each other. Imperfect circles in motion thus create form, space and time as we understand them.

The creation of form, space and time is an extension of Purpose Light and Love. Yet everywhere that the wavelengths manifest they manifest a very real illusion for the purpose of experience. Even the wavelength that manifests light and love is withdrawn into Purpose periodically, but as DK says it is “not that which is not, but that which is simply esoteric.”

My question: Always? I can understand that this is happening during the evolution and in this way always, because evolution always follows involution. But isn’t there an involution? A time when separateness gets bigger – like the waves getting bigger?

JJ: The interplay of male and female energies (or the light and love parts of the wavelength) takes place during both involution and evolution. The main difference is this. During involution the interplay goes out of balance and during evolution they head back toward balance. In the process of this journey a new wavelength is created by the spiral movement of the point going in and out of experience. This lays the foundation for new creation.

I was asked to comment on whether or not masters have incarnated among us.

Some Masters and initiates have incarnated to fill various rolls in bringing in the new age. Not all of them will be involved in what we call spiritual work, but all who are successful will be working for the benefit of mankind. Looking for Masters among our brethren tends to create a division and often an illusionary one. Therefore, the true masters who will be doing their job will walk among us as equals and not seek for recognition of any status. As I have said before there are some fairly high initiates who have gotten side-tracked and caught up in illusion and will have to backtrack to get back to where they once were. This has caused some restructuring of plans, but there are certain high decisions that cannot be altered by anything we do.

Will they all be men?

Advanced initiates can choose their sex. Whether or not they will be men or women will depend on where the greatest opportunity for service exists.

James writes: Does anyone else feel we should get together in some kind of business venture or would it be better to find our own variety of self sufficient way to make a living???

JJ: Eventually many of those who actively work to establish the kingdom of God will work together to make a living. The problem with this age is that we have to spend so much of our time just making a living that the only way that many of us can spend enough time together to create oneness in the soul is by working together for our livelihood. This is a desirable goal to pursue, especially when the time comes that Molecular Businesses are created.

Some time ago someone asked a question about what happens during sleep. The answer is quite interesting.

The connection to the heart, however, remains intact during sleep.. Now many new agers tell us to disregard the mind and live in the heart only. Actually this is what happens during sleep, so if we took their advice we would be in the normal sleeping state all the time.

What causes dreams? It is generally the interplay of the heart with stored memories in the physical brain. The heart part of ourselves is missing the mind so the next best thing to compensate is the computer brain and the interplay between the two (heart and brain) produce dreams over which the mind has no control because it is not present. This is why the mind has difficulty in remembering dreams – it did not actually go through the dream experience but registers some of the memory upon returning when waking.

Sometimes the mind or higher self will send impressions to cause us to have dreams of significance. When this happens you will wake up with a memory of the dream and a feeling that the dream is important and you should contemplate the meaning.

What is the difference between sleep and death?

In sleep only one of the major parts of yourself is absent. In death both the life in the heart and the mind depart to the spiritual realms.