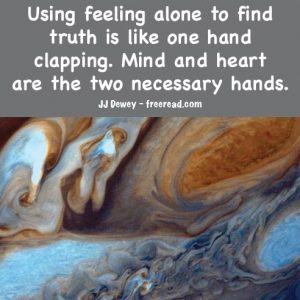 A reader quoted this from DK

“Increasingly must your inner life be lived upon the mental plane. Steadily and without descent must the attitude of meditation be held – not for a few minutes each morning or at specific moments throughout the day, but constantly, all day long. It infers a constant orientation to life and the handling of life from the angle of the soul. This does not refer to what is so often referred to as “turning one’s back upon the world.” The disciple faces the world but he faces it from the level of the soul, looking clear-eyed upon the world of human affairs. “In the world, yet not of the world” is the right attitude – expressed for us by the Christ. Increasingly must the normal and powerful life of the emotional, astral, desire and glamorous nature be controlled and rendered quiescent by the life of the soul, functioning through the mind. The emotions which are normally self-centered and personal must be transmuted into the realizations of universality and impersonality; the astral body must become the organ through which the love of the soul can pour; desire must give place to aspiration and that, in its turn, must be merged in the group life and the group good; glamor must give place to reality, and the pure light of the mind must pour into all the dark places of the lower nature.

“These are the results of mental polarization and are brought about by definite meditation and the cultivation of the meditative attitude.” Discipleship in the New Age, Vol. 1, Pages 50-51

He said he really liked this quote outside of the use of the word “polarization” being applied to people He saw this as degrading because in his view it is usually applied to things.

Polarization in this context applies to the activity of the life within the form rather than the form itself. Even if we go to sub atomic particles we find that protons are polarized in the positive charge and electrons in the negative. Then each atom as a whole is polarized in either positive or negative, even the so-called neutral ones. The same applies to molecules in relation to each other. The polarization of the various particles causes attraction or repulsion which creates all form.

Secondly we use many words interchangeably between humans and various form creations.

For instance, we may call a classy car “beautiful” in one breath and a human in another.

After we get the bugs out of our computer we mat declare it in a good state of health, just as a doctor may state concerning his patient.

We may declare a magnet “powerful” as well as a human who is strong.

I wouldn’t think so as long as the words were not negative. However, if I called my car a “useless piece of junk,” and then transposed that phrase toward a human, the person would indeed have cause to take offense.

Polarization is not a negative or positive word. It is merely a word to describe what is happening, as in turning left or right, something that can apply to an object in motion or a human.

Reader comment: “I resent the implication that I am supposed to “stay in my place until told to move.”

It is difficult to ascertain where this thought is coming from. No one, no thing and no principle is making you stay in your place. No one tells you to stay in one polarization or move from one polarization to another. This is entirely up to your free will.

Yes, that could roughly correspond. When a person is in the emotional polarity he accumulates many pressures that push him toward the mental polarity. He resists many of them, but more pressures and incentives keep showing up until resistance is futile. Then comes a moment of time that he lets go of the emotional hold and switches to the mental domination.

The general mental polarity is achieved at the second initiation, but even during this time the emotional polarity can take back temporary domination during periods of stress. It is at the third initiation that he learns to “hold the mind steady in the light” and is able to hold his polarization in the mind/soul come hell or high water.

It is true that we evolve in degrees and there are many degrees to hurdle as we pass through the physical, emotional, mental, Buddhic and other planes. The degrees within the planes are not strongly differentiated and thus we do not have the appearance of strongly different poles as we do between the emotional and mental planes (when looking at them from a wholeness point of view). Because of the powerful contrasts between the emotional and mental planes the word “polarity” is often used in reference to our relationship with them.

Reader comment:: A mentally polarized person recognizes the value of their emotions but uses them rather than being used by them. Interestingly, a fish would die in the air if kept their too long and a person would die in the water if kept under too long.

Good observation and expands on the statement that the mental person “will channel their emotions toward a purpose.”

I’ll add one more attribute to recognize one who is emotionally polarized:

He is easily offended, even when no offense is intended.

Question: Is the mental person easily offended? Why not?

I was asked to comment on Sollog’s predictions of the following. (Note this was written in 2003)

Sollog: “The 911 attacks on the USA are considered in the future to be THE START OF WORLD WAR III”

JJ The first thing to consider is that the future is not set in stone, so I do not pretend my words are god-breathed. There is a possibility that this could be the case, but the probability is that it will be viewed as a point of tension that will lead to a more stable society allowing Christ and the Masters of Wisdom to return.

Solog The INVASIONS of Afghanistan and Iraq by the United States are seen as TRIGGERS to unite the Muslim world against Western Civilization and particularly against Christianity.

JJ It may seem that this will be true for a couple years to come but the chances are that Muslim opposition will diffuse as the coming generation becomes more exposed to the ways of the west. If the U.S. is successful in establishing a democracy in Iraq the trigger can be the opposite of the above prediction, creating a domino effect for the downfall of authoritarian governments. The old will resist the new and it will seem for a while that the Arab countries are not ready for democracy, but it will eventually take hold. This is the probability. Wild cards are always a consideration.

Solog: No one can stop what has already occurred. Great prophets have seen this time throughout time. It is a horrific time. Billions will soon be dead from disease, warfare and violent earth changes.

JJ The great earth changes will not occur for over 100 years. There will be wars and famine but not as catastrophic as he expects.

Solog: The ONLY THING anyone can do is to stay away from the major targets. These are heavily populated areas around the world.

JJ There will be problems in the major cities but nothing like he expects.

Solog: By 2020 if you do not live in the high mountains of Asia, Canada and South America you will most likely be dead!

JJ This has a 95% chance of being far from reality.

Solog: The future of humanity is in the high mountains of Asia, Canada and South America.

There is no long-term future in large modern cities.

JJ Large cities will be around for thousands of years to come. However, many new cities will eventually be built with a planned limitation in population, but linked to make greater cities. The effect will be to live in a smaller city environment while enjoying the benefits of a larger city.

Notice that all of Solog’s (and many other’s predictions) focus on the worst of all possibilities. They see what they expect.