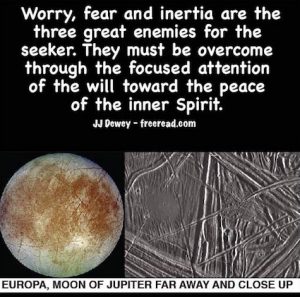 “Take Y2K for example. Right now it looks like nothing substantial will materialize on this (though we are hardly out of the woods on it). You might say therefore that all the hype was a waste of time. The truth is that all the hype is what got us sufficiently prepared that this is so far turning out to be a non-event.”

JJ: I think we are in complete harmony here. I think it is entirely appropriate that the world was made aware of the problem. Any problem must be recognized before it can be solved and if Y2K did create chaos then it would have opened a window for the dark brothers. On a personal level there was little I could do about it except prepare if necessary and my inner self told me that personal preparations were unnecessary. On a worldwide level, tremendous effort had to be made by those who were involved.

It is entirely possible that those who sounded the alarm such as yourself roused those in power to focus more needed attention on the problem. I might add that the $600,000,000,000 invested in the solution didn’t hurt either.

The reader then expressed concern that I must not have been concerned about the nuclear threat of the Soviets as well as other threats of the past.

When I spoke of worries that never happened I didn’t mean to imply that the nuclear threat in past decades or the many others through the years such as the Cuban Missile Crisis from Russia was not something that needed to be dealt with at the time. But if we could have seen the future back then we could have all avoided a lot of worry over it. My point was that we often spend a lot of unnecessary energy worrying over something we can do nothing about and in the end nothing happens anyway. This was also the point Jesus was making in telling us to take no thought for tomorrow.

As far as the tension of war or weapons of mass destruction anyone who has any power or influence in the matter should do all they can to neutralize the situation.

I believe that Project Peace and Goodwill, which presents an actual solution will give the average person an opportunity to help by promoting it.

On the other hand, there are many unfounded scary predictions that are always out there that are centered in illusion and I’m sure you will admit that if we buy in them all and let them worry us they are likely to make kooks out of there best of us.

The popular one now (in the year 2000) is that about half of the world is going to sink underwater in the next couple years. Actually, it was already supposed to be happening but they keep moving up the date.

“Now is hardly the time to get of our guards and stop worrying about what might happen and prepare for it.”

JJ: I have always stressed being vigilant, but one of my points is to pierce the cloud of illusion and become vigilant toward real threats where such vigilance can make a difference. A real threat not centered in illusion are the weapons of mass destruction and the hatred that is out there because of religious and cultural differences. This is the time to do all in our power to bring the nations together in a peaceful way working through their free will.

Many fundamentalists have the idea that Jesus is going to show up and exterminate the wicked and somehow force everyone to live in peace. The scriptures are true, but the second coming will not take place as they expect. The picture of bringing peace by killing everyone who doesn’t accept you is of the adversary indeed.

We must take individual responsibility for our destiny as beings in the image of God, but my whole point was to seek within for guidance through the Spirit so each of us will know our own part. Then if we play that part successfully we will be told what to do for the highest good of the whole, and if we follow it there will be no need to worry, even if the worst should happen on a personal level.

By the way your quote

“The price of freedom is eternal vigilance.” Is one of my favorites.

“Perhaps I misunderstood then. I definitely had the impression that you felt there was no need to prepare because you didn’t.”

JJ: I thought I made this clear. I believed it was important to solve the problem with Y2K and believe that we were correct in doing what was necessary.

I received no communication from my inner self to store food, get auxiliary power etc so I did not? Why should I prepare for something where I feel no need to do so?

“And you seemed to infer those who did were foolish or not in touch and that God would warn us if we needed too.”

JJ: I was inferring that those who fall for every alarm sounded are foolish. I have been partially sucked in to such things in the past when I did not trust my inner self and hope to never trust in the “arm of flesh again,” in this respect.

As far as Y2K goes the arguments for disaster were so strong in many cases I can’t blame anyone for storing some food and taking precautions. On the other hand, I have a nephew who fled to Mexico with his family about a month ago for safety from the collapse of the United States that was coming because of Y2K. The whole family including myself tried to talk him out of it, but to no avail. This I think was very foolish and I told him so.

A reader expressed concern that Y2K was still a danger, even though Jan 1, 2000 has come and gone.

From what I read it was supposed to strike at the beginning of the fiscal year of the country and various organizations. But then nothing happened. Next I heard that January First was a sure date for things to happen. Still nothing significant happened. Now I learn for the first time that I am supposed to worry for another six months. I don’t think so. I’m sure bugs will surface, but human ingenuity will fix them.

There are a lot of things in the immediate future that need our attention. I invite you to join with me in doing something about taking away weapons of mass destruction from the nations which weapons will eventually filter down to some religious nuts who are willing to destroy the world for their God. The weapons challenge that we face in the world makes Y2K look like a walk through the park on a sunny day.

“And again I say unto you, sue for peace, not only to the people that have smitten you, but also to all people; And lift up an ensign of peace, and make a proclamation of peace unto the ends of the earth.” D&C 105:38-39

Someone needs to ask them where their proclamation of peace unto the ends of the earth” is.

It is an excellent idea and someone needs to do it. Why not us?