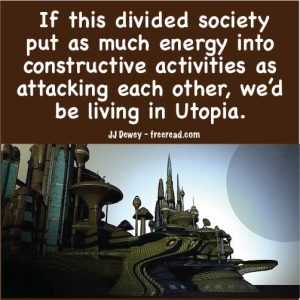 The United Nations is far from perfect. If it were closer to perfection there would be no need to begin Project Peace and Goodwill for the UN would have that covered. But it is not a perfect world.

On the other hand, to see the UN as the great Satan controlled by the devil himself will give a person a warped vision of everything that comes from that body.

Some think that the UN has done nothing but evil, but let us suppose that there had been no UN at all since 1945. Many things could have turned out differently. It gave the United States and Russia the means to sound out their differences at the conference table rather than doing it through nuclear war.

The little release of tension that expression through diplomacy has made available may have just let off enough pressure to avoid major conflict several times..

Think of it. The major powers of the earth have not gone to war with each other since 1945! That in itself is a miracle, and the UN, despite its faults, can lay claim to some of the credit.

There are two main criticisms of the UN.

First is that it threatens to become the head of a worldwide dictatorship.

And second, that it never seems to have power to accomplish much.

There are always those who would like to turn any organization they are affiliated with into a tyranny. Some members of our own Congress would attempt to do so if they could become President. We should be ever vigilant of all governments, including the UN, but so far it is not close to having power to take over the world.

The second great criticism is actually caused because of the real small amount of power that body has. Often are the times that it cannot accomplish some of its positive goals because of lack of funds let alone take over the world.

Here are some facts on the UN I’ll pass on from their web site.

The United Nations is today, more than ever, engaged in service to all the world’s nations and peoples, but its ability to function is hampered by financial problems. Unless Member States pay their debts to the Organization — over $2.6 billion is owed as of 31 May 1999 — the UN will remain in a precarious financial situation. It is clear that this situation stems in part from widespread public misunderstandings about what the UN really is — and does.

*    The budget for the UN’s core functions — the Secretariat operations in New York, Geneva, Nairobi, Vienna and five Regional Commissions — is $1.25 billion a year. This is about 4 per cent of New York City’s annual budget — and nearly a billion dollars less than the yearly cost of Tokyo’s Fire Department. It is $3.7 billion less than the annual budget of New York’s State University system.

*    The UN has no army. Governments voluntarily supply troops and other personnel to halt conflicts that threaten peace and security. The United States and other Member States on the Security Council — not the Secretary-General — decide when and where to deploy peacekeeping troops.

*    The New York Headquarters of the UN requires the services of 4,500 people. The Swedish capital of Stockholm, by contrast, has 60,000 municipal employees.

*    Some 52,100 people work in the UN system, which includes the Secretariat and 29 other organizations such as UNICEF. Three times as many people work for McDonald’s, while Disney World and Disneyland employ 50,000.

*    Eighty per cent of the work of the UN system is devoted to helping developing countries build the capacity to help themselves. This includes promoting and protecting democracy and human rights; saving children from starvation and disease; providing relief assistance to refugees and disaster victims; countering global crime, drugs and disease; and assisting countries devastated by war and the long-term threat of land-mines.

*    The United Nations and its agencies, funds and programmes — mainly UNICEF, UNDP, UNFPA, WFP and WHO — have $4.8 billion a year to spend on economic and social development, to assist countries in such areas as health care, sanitation, agriculture and food distribution. This is the equivalent of 81 cents per human being. In 1997, the world’s governments spent about $804 billion in military expenditures — the equivalent of $135 per human being.

*    The total cost of all UN peacekeeping operations in 1998 was some $907 million — the equivalent of less than .5 per cent of the US military budget, and less than 0.2 per cent of global military spending.

*    The United States’ assessed share of UN peacekeeping expenses — nearly 31 per cent of the yearly total — has dropped by over two thirds, from about $1 billion in 1995 to $284 million in 1997. This equals less than one-quarter of 1 per cent of the annual US military budget.

*    Member States share the risks of maintaining peace and security. Since 1948, over 1,580 UN peace-keepers from some 85 countries have died in the line of duty. Less than 3 per cent were Americans.

*    UN Secretariat staff has been cut by 25 per cent to about 8,700 from a high of more than 12,000 in 1984-85, and streamlining continues. Tough new standards have been set for staff performance. UN staff members have about one-third of their salaries deducted in lieu of taxes.

*    A “quiet revolution” to make the UN leaner and more effective was launched by the Secretary-General in July 1997, as the second phase of his reform efforts. Initiatives include consolidating several Secretariat bodies, streamlining management and shifting resources from administration to development work.

*    An Office of Internal Oversight, established in 1994, is pursuing its mandate of promoting more effective and efficient management, and eliminating waste, fraud and mismanagement. It includes a special UN investigative unit and a hotline.

*   The total expenditure of the entire UN system — including all the UNfunds, programmes, and specialized agencies — came to some $10.6 billion in 1997. This is roughly half of the annual revenue of a major corporation like Dow Chemical, which took in more than $20 billion that year.

*    Of the $318 million in procurements approved by the UN Secretariat in New York in 1998, American companies got 31 per cent of the business, or $98.8 million. Of the $2.9 billion in goods and services purchased by the entire UN system in 1997, US companies received $404 million, or 14 per cent, of the business, nearly three times as much as any other country.

*    The UN, its agencies and the diplomatic and consular corps contribute $3.2 billion a year to the economy of the New York City area alone, according to Mayor Rudolph W. Giuliani. That has generated 30,600 jobs, yielding $1.2 billion in annual earnings.

1 thought on “The United Nations”