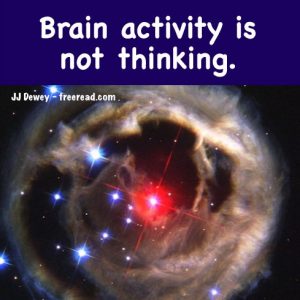 A reader wanted clarification on this statement I made:

“ The mental person must step down to the feeling world to reach agreement with the emotional person.”

The first possible miscommunication is that this “stepping down” idea may be interpreted to mean that the thinking male must step down a notch to be on the same level as the emotional female and such idea is not the case nor was it intended to be conveyed.

Females have minds and men have emotions and when I refer to the mental person I am referring to mental people of both sexes. Those who are mentally polarized are liberally found among both the sexes.

But wait, you say. Are not men left-brained logical thinkers and females right-brained emotional feelers?

Not so fast. The man may be very left brained, be tuned in to factual sequential brain activity, but be very much centered on the emotional level for decision making and have very little mind development.

Brain activity is not thinking. True thinking from the plane of the mind is only done by about ten per cent of the people and even most of those are only in kindergarten in dealing with this principle.

Before I proceed I want to make one thing very clear. I do not want to add any fire to the battle of the sexes. I think it is silly that such a battle should even be considered, especially from the view that there is reincarnation and that we each spend about half of our time in each sex. If, I being a male, were to consider myself superior, then I would experience disappointment when I incarnate into a female body and visa versa. Such is not the case. Male and female are equal in importance, but different and together these two energies create the entire universe we live in.

Now let us apply this principle to the three worlds where form building takes place, the physical, emotional (or astral) and the mind (or mental).

Are these there worlds on the same vibration?

I think we will have to admit that they are not. For instance, almost everyone realizes that the unseen worlds are on a “higher” level or vibration than the physical.

Does this make these higher worlds “better?” Not necessarily. Because we are in the physical then it is “best” that we are here, even though it is a lower world. We would miss much learning if we just bypassed this experience.

Are the Masters “better” than us? They do not look at it that way. They merely see themselves as having progressed down a path a little farther than we have and have gathered angles of vision that are not yet available to us.

The next world higher than the physical is the emotional or astral. This world is based largely upon illusionary principles, but nevertheless is a higher vibration than physical.

Higher in vibration than the astral is the plane of the mind which is created from true principles and the higher mind sees through illusion.

It may be surprising to learn that those who have risen above the astral focus, and are centered in the love-wisdom pedals of the heart, dwell on the plane of the mind and not the emotional polarization. The mental plane must be entered to some degree to play the harmonics of the love-wisdom duality.

Most men and women in today’s world are centered on the emotional level and when the disciple does enter into the plane of the mind in his focus he (or she) will definitely have to lower vibration when in confrontations with emotionally polarized people.

The Master Djwhal Khul, in speaking through Alice A. Bailey, writes in his forward of raising “the aspiration and the will-to-serve from the plane of the emotions to that of the mind (the plane whereon the Masters can be found)…”

Thus I stand by my teaching that one who dwells on the plane of the mind will have to step down to the emotional plane to deal with those encountered there.

In addition there are entities even above the Masters who dwell in higher planes of feeling that must step down their vibration even in dealing with what we may call a Master of Wisdom.