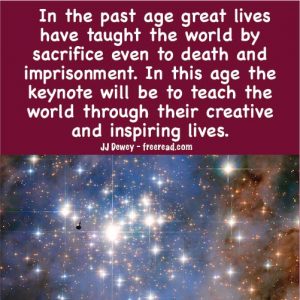 The Principle of Sacrifice

The Question What is the Law of Sacrifice?

Does this then mean that sacrifice is old news and no longer applies to this age? After all, that which is good in one age can become the evil in the next.

No, it does not. All principles are eternal and are always in play.

So why the shift of emphasis away from sacrifice to service?

The principles remain the same, but the way they play out as they act upon forces, cycles and people will vary with the times.

In Pisces the emphasis was on sacrifice so humanity could learn its lessons… BUT – its lessons were twofold.

After twelve more turns of the Zodiac we shall enter Pisces again and learn new lessons. In the meantime humanity has learned a few things to preserve and a few to let go on the journey to understanding the core of the principle.

Finally, after over 2000 years we are finally absorbing the idea that not all that which appears to be sacrifice is beneficial. We are learning not to give of our substance to one who merely claims to be Gods representative. We are learning that some type of “service” or benefit should be returned to us – not in some distant heaven, but right here upon the earth.

Many of the churches are still caught in the Piscean mindset on sacrifice, but every day more and more people are breaking away and refusing to donate or sacrifice unless there is understanding behind it and a good seen on the horizon.

Because humanity is learning this lesson the churches of tomorrow will be much different than the churches in ages past. They will eventually operate more like a club with membership dues which, when paid, certain benefits will be expected. The regular sacrificial donations will diminish every year until this needed change is seen by the churches. Donations will not cease, but there will be a change in emphasis.

That which we want to keep as far as the lessons of sacrifice are concerned centers around the meaning of the true principle.

And what is that?

A reader give a good insight:

“The word, sacrifice, means sacred [sacer] – work [facere, to make or do], so anything which God, the One Mind, or even any of a hierarchy of lesser gods does is a sacrifice (sacred work or doing).”

That which we are leaving behind is the selfish desire element in sacrifice. We desire heaven, God’s approval, or even that of our fellow men so we sacrifice. Now we are coming to realize that sacrifice is indeed a sacred work and such work requites an exercise of the will, focus wherein energy follows thought.

The true principle behind sacrifice is much different than dreamed of in religious philosophy.

Instead of a giving up with no thought of return it is really a payment. To understand we must look at the reason we work, whether it be sacred or non sacred.

We work in order to create or obtain a thing of beauty, a product or a desired goal beneficial to the individual or group.

Sometimes that work is a strenuous effort that we would just as soon not do, but because the end goal is seen we continue. The work is thus the sacrifice, but it is a sacrifice of joy because the end is in view. If there were no desirable end true sacrifice would not be made.

The true principle of sacrifice, however, transcends the individual and must have an end benefit for a group. Thus the person engaging in the sacred work of sacrifice sees a vision of improvement that has effects beyond his personal benefit

True sacrifice has its beginnings in the family unit where the parents work on behalf of their children so they can have a better life than they themselves have had. In the process of this work they will also benefit themselves as well as have joy in the achievements of their children.

Question: What does DK mean when he says sacrifice is followed by the Law of Re-Appropriation?

Let us start with the basic meaning of this word under consideration which is: “Appropriate.”

This word means: “To set apart for specific use.”

Therefore to re appropriate would be to have a thing moved from one location or use to another.

When we commit true sacrifice we see before us the appropriated work and the energy available to accomplish that work. The energy is then obtained and the work progressed through the power of will.

When the work is completed then the work and purpose shifts one link down an eternal chain. When the purpose makes the shift so does the energy and all is “re-appropriated.”

The next part of the question to consider is: What does the term “seeds of life” mean to you and what is your part in nourishing them through sacrifice?

Yesterday I parked my car in a tow-away zone…when I came back the entire area was missing. Steven Wright