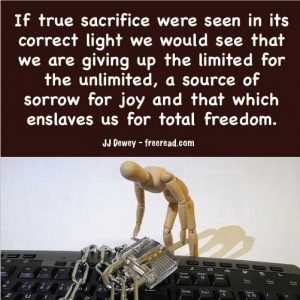 Over the years I have been here we have covered quite a few of principles, but Djwhal Khul through Alice A. Bailey has also presented quite a few additional ones. Some, like the Law of Correspondences, has been covered in quite a bit of detail while others he mentions only in passing, possibly as a hint.

DK doesn’t use the term “principles” in the same way that I do. When he talks about them he often calls them laws. Since we have already covered the Law of Correspondences in some detail, and more elaboration will follow, we will skip that one for now. Instead we will search through the Alice A. Bailey books and dig out some Laws that are mentioned and seek to understand them.

The first law we will explore is called “the Law of Sacrifice.” DK tells us that this law “is ever followed by the Law of Re-Appropriation in the spiritual sense.”

Now he writes quite a lot about the Law of Sacrifice, but only mentions the Law of Re-Appropriation once. Thus it will take some creative thought mixed with intuition to understand this second law.

As seed material for this law contemplate text below. Note the questions at the end.

“The issue as yet remains undecided for the task of relinquishment is not easy. I would suggest to you that that which has to be relinquished may not be that upon which you are at this time laying the emphasis. I would remind you also that the Law of Sacrifice is ever followed by the Law of Re-Appropriation in the spiritual sense. Upon this fact I would ask you to ponder.” Discipleship In the New Age Vol 1 Pg 260

“In the earlier part of your last instruction, I pointed out two most necessary requirements which the disciple in training for initiation must grasp. As they are closely connected with this third point (referring to the revelations which the initiate can expect), I would like to touch upon them here. The first statement I made was to the effect that the will is fundamentally an expression of the Law of Sacrifice; the second was an attempt to emphasize the necessity for grasping and accepting two initial premises:

First, that energy follows thought. Second, that the eye, opened by thought, directs that energy.

Why, I would ask you, is the will an aspect or an expression of the Law of Sacrifice? Because the will, as considered and understood by the initiate, is essentially that monadic essence, qualified by “fixed determination,” which is identified with the Will or Purpose of the planetary Logos. It is the highest divine aspect which the initiate finally manifests, prior to entering upon the Way of the Higher Evolution. In this connection it is useful to remember that one of the appellations of Sanat Kumara is that of “the Great Sacrifice,” and also to attempt to recognise some of the factors which have earned Him that name. These might be stated to be as follows, among others which you could not grasp if there was the language available to express them:

(a) The basic sacrifice which the planetary Logos made was when He decided to incarnate or enter into the form of this planet. This was from pure choice, motivated by His “fixed determination” to function as the Saviour of the planet, in the same sense as the world Saviours come forth for the salvaging of humanity. Sanat Kumara is the prototype of all world saviours.

The initiate, on his tiny scale, must learn to function also as a saviour, and thus express the Law of Sacrifice through the medium of the developed, pure, reasoning will, and not simply from that of impulsive love and its activity. Here lies a basic distinction. Sacrifice must not be regarded as a “giving-up,” but rather as a “taking-over.” It has a mysterious relation to the Law of Karma, but on such high levels that only the advanced initiate can grasp it.

(b) This sacrifice was imperative in the fullest sense, owing to the ability of the planetary Logos to identify Himself in full consciousness with the soul in all forms of life, latent within the planetary substance. When He “took over” this task, He, esoterically, had no choice, because the decision was inherent in His own nature. Because of this identification, He could not refuse the invocative appeal of the “seeds of life, striving within the substance of the form, and seeking added life and light,” as the Old Commentary puts it. This striving and reaching forth evoked His response and the going out of His divinity, as expressed in will, activated by “fixed determination” to meet the deeply hidden divinity within these seeds. What He initiated then still persists and-under the Law of Sacrifice-He will complete the task, no matter how many aeons it may take.

The initiate, on his tiny scale, has to learn to work as a nourisher and saviour of the seeds of life within all forms with which he may achieve a measure of identification. His will must go out in response to the invocative demand of humanity, and his “fixed determination” must motivate his ensuing activity.

(c) Under this Law of Sacrifice, Sanat Kumara (to express the idea in occult terms) “must turn His back upon the Central Spiritual Sun, and with the light of His Countenance irradiate the path of the prisoners of the planet.” He sentences Himself to stay for as long as may be needed, “acting as the Sun and light of the planet until the Day be with us and the night of pralaya descends upon His finished task.” Thus and only thus can the light of the Central Spiritual Sun begin to penetrate the dark places of the Earth; when this happens all “shadows disappear”-an occult reference to the all-embracing radiance of the Monad as it absorbs both its reflection, the soul, and its shadow, the personality.

The initiate, on his tiny scale, achieves a paralleling expression of the Law of Sacrifice; he eventually turns his back upon the courts of Shamballa and upon the Way of the Higher Evolution as he retains his contact with the Earth and works as a Member of the Hierarchy for the extension of the will-to-good among men, and therefore among all the lesser evolutions.

(d) Under the Law of Sacrifice, the Lord of the World remains ever behind the scenes, unknown and unrealised by all the “seeds” He came to save, until such time as they have reached the stage of flowering forth as perfect men and, in their turn, become the saviours of humanity. Then they know Him to exist. From the standpoint of the forms of life in the four kingdoms of nature, Sanat Kumara is non-existent. In developed humanity, prior to moving on to the Probationary Path, He is sensed and dimly sought under the vague word “God.” Later, as the life which the “seeds” have manifested reaches the higher layers or brackets in the human hierarchy, there emerges in the consciousness of the disciple, the assurance that behind the phenomenal world is a world of “saving Lives” of which he may eventually form a part; he begins to sense that behind these Lives there stand great Beings of power, wisdom and love Who, in Their turn, are under the supremacy of Sanat Kumara, the Eternal Youth, the Creator, the Lord of the World.

The initiate, on his tiny scale, likewise has to learn to work behind the scenes, unknown and unrecognised and unacclaimed; he must sacrifice his identity in the identity of the Ashram and its workers, and later in the identity of his working disciples out in the world of daily life. He institutes the needed activities and brings about the required changes, but he receives no reward, save the reward of souls salvaged, lives rebuilt and humanity led onward upon the Path of Return.

These few thoughts upon the significance of sacrifice or upon the “taking over,” through identification, of the task of salvage, of revitalising and of presenting opportunity, are important to all disciples, as a goal and a vision.

The second point made, based upon the occult platitude that “energy follows thought,” should carry inspiring implications to the earnest disciple, if he truly considers the statements made and regards them of practical application.” Discipleship In the New Age Vol 2 Pg 285-289

Questions: What is the Law of Sacrifice? What does it mean when it says it is followed by the Law of Re-Appropriation? What inspiration do you gather about sacrifice from the above text?

Read again this statement: “The initiate, on his tiny scale, has to learn to work as a nourisher and saviour of the seeds of life within all forms with which he may achieve a measure of identification. His will must go out in response to the invocative demand of humanity, and his ‘fixed determination’ must motivate his ensuing activity.”

What does the term “seeds of life” mean to you and what is your part in nourishing them through sacrifice?

Is there such a thing as sacrifice as the world understands the term? Why or why not?