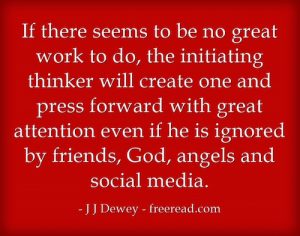 The Path and initiation

Question: How important is it to become an initiate?

That is like asking, how important is it to become an adult? It is just something that happens (to all but a few in this creation) as we grow up.

When you are born, you cannot speak a language. Eventually you learn a few words and when you find them useful you want to learn more words. When you achieve a good vocabulary then you seek to use it to your advantage and also learn to read etc.

Becoming an initiate is no more optional than learning to speak. Eventually all of us do it and when we pass the first then we have a strong desire to move on to the second. The initiate often does not know the details of initiation as he passes through them as a natural part of his evolution.

Question: What IS the “Path” and where does it lead?

The path is that trajectory which leads us in the direction of spiritual evolution, or back into the presence of God and beyond “worlds without end.”

The average person is on the path when he chooses kindness over cruelty, love over hate, the will of God over his own will etc. When he chooses the negative he is said to be off the path, but this is always seen as a temporary condition. When one goes off the path he goes through darkness and suffering until he is forced to get back on. He may stay off the path for a week, a year or for lifetimes, but sooner or later he learns his lessons and returns.

Question: I have been taught that the object of our existence it to strive toward a “fullness of joy”. Is that the Path?

Question: The Bible speaks of a “strait and narrow path” and the need for baptism as a gate. Is this part of the path?

One of the names of the Path is the strait and narrow path. Physical baptism is not the gate, but is a symbol of the gate.

The physical act of baptism is a dead work. Taking a person and placing him under the water and bringing him out of it, by itself does nothing, even if you have all the authority of the hosts of heaven.

What then is the living work behind baptism?

The living work is the meaning behind the symbol and if a person understands this he could obtain all the benefits of baptism without baptism.

The scriptures basically tell us that we need to be baptized to be saved. If baptism itself is a dead work then what is it really telling us to do to become saved or delivered?

The basic meaning of baptism as many have been taught in church is to have our sins washed away, but if physical baptism is a dead work then what really washes our sins away?

We have learned that the real meaning of sin is error or “missing the mark” therefore the washing away of sin is the removal of error. But what is the error or errors that need to be removed?

The basic error that baptism helps to remove is this. All except those who have the name of God in their foreheads (Rev 14:1) look for authority from a God without. Now when that God without speaks and we accept a great error is created. It is not long before we imperfectly follow the God without and as soon as we disobey, even in the slightest, guilt is created.

Now there are two ways to remove this guilt. The first is to satisfy the demands of an angry “God out there.” But the trouble with this method is that it is not long before you break more commandments and guilt returns. The Catholic confession is a good method of alleviating this returned guilt, but this is a temporary measure and you are again dependent on a voice for God out there rather than the Spirit within.

What is the second and permanent way to remove the guilt?

The second way is to remove yourself from the voice of the outer God, or the “beast” as we taught earlier, and subject yourself to the one authority, the Spirit of God within.

This was the difference between the foolish and wise virgins in the parable. The five wise had oil in their lamps, or the Spirit of God in their hearts and this light of the Spirit lead them to the Christ. The five foolish had no oil and had to go buy some from the authorities, but the oil from the authorities without did not light the way and they “missed the mark” or sinned and were not able to find the Christ.

Thus we see that the true meaning of baptism is to remove the error of guilt, permanently, which guilt is caused by an error in thinking. True salvation is the removal of guilt. The scripture could have said: “Wash away the cause of guilt, center yourself on the Spirit within and you will be saved.” Because the true salvation through baptism is the salvation or deliverance from guilt, does this mean that the physical act should not be done?

Question: From your teachings it sounds like you have to do some awesome things or be famous like George Washington to be an initiate. Is this status beyond the reach of common folk?

All initiates do not become famous. The reason I use famous names when talking about them is that we know who they are and can learn from their example. If I were to present an unknown as an example of an initiate then this would not be helpful in teaching the principle.

You mention George Washington as an initiate. What did he initiate? He was a big factor in initiating the United States and the Republic. But was he the only one who saw the vision and worked to initiate it?

No. There were hundreds of them in various stages of initiation. Many of these names we would not recognize.

The same goes for the establishment of Christianity. The Christ was the greatest initiate, but there were many others who became initiates by seeing the vision and assisting in the beginning of a great work.

There are many initiates who are not the one who actually begin a great work, but are able to see the vision behind a work which is set in motion. He will see a place for himself and be a great instrument in moving the work forward.

There are other factors to master besides the initiation of a work. The initiate must master the various elements of the lower nature as progress is made.

The important thing for each of us is to achieve soul contact and get a sense of our next step in fulfilling the Will of God. When one picks this up and follows it he will move onward with joy and it matters not if he is an initiate or aspirant. Because of reincarnation we have unlimited time to achieve the goal. The present moment is what counts.

Reader Comment: You said this: “Because of reincarnation we have unlimited time to achieve the goal. The present moment is what counts.” You said we have around 1000 lifetimes to reach perfection. That doesn’t sound unlimited.

Just like we do not have unlimited time with a single life, but have additional opportunity in future lives, even so in this solar system we may experience roughly 1000 lifetimes, but then there are other solar systems.

If a person lives 950 lives and then chooses the dark path he may wind up cutting off his opportunity to reincarnate and will have to wait billions of years for a new cycle and then begin the approximate 1000 lifetimes all over again. In the meantime all his associates will have passed far beyond him and will have become gods in comparison to himself.

When we finish our incarnations in this cycle we will have a rest and then to on to higher cycles. Reincarnation in some form will exist all through eternity, “worlds without end,” as hinted at in the scriptures. But in a future creation, if we complete our education here, we will reincarnate in higher spheres in higher forms.

Consider the Ancient of Days. He incarnated here on earth 18 million years ago as the first Adam, or man, and is currently incarnated in an etheric body in Shamballa.

Consider the life of the earth itself, incarnated into an entire planet and will incarnate in the body of other planets in the future.

Someone mentioned about the possibility of sitting around and doing nothing. The only time this happens, in the body or out of the body, is during rest. Consider rest. When one is enjoying a good nights sleep is he ever bored? I get bored easily in certain physical plane conditions, but have never been bored by a good sleep, but do not want to sleep forever.

During future periods of pralaya (rest) there will be no boredom, but glorious rest and sweet dreams for those with good works.

For those who maintain full consciousness in the body and out of the body, there will be no boredom, but unlimited opportunities.