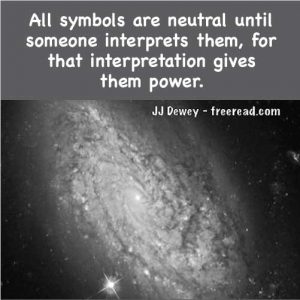 Principles Behind the Symbols

There seems to be a lack of clarity with some on the subject of baptism so some additional remarks are in order.

Because baptism and other symbols are called dead works does not mean they are not useful. They are indeed powerful symbols of an inner reality seeking to find expression on the physical plane.

Let us look at another symbol, the flag of an honorable nation. The flag itself is just a combination of cloth, metal and wood – not living by normal standards. If a person from a far away nation were to look at it all he would see is a dead object. But if a citizen were too look at it he would instantly have stimulated the emotion of many memories that reminds him of the blood sweat and tears that went into the founding of his nation. At this point he may be moved to tears with a living powerful feeling.

The dead flag thus produced a living feeling when the meaning behind the symbols was registered on his consciousness.

Here is the interesting point to register. The person who is stimulated may have a dozen books worth of information about the history of his country that he associates with his flag. Personal experiences may also be involved. Whereas his general stream of consciousness may bring some of this up a general reflection may have little stimulation compared to his national symbol. One look at the flag could bring an encyclopedia’s worth of thought and feeling to the surface in an instant.

The same goes for baptism. If Rick, a Catholic Priest, or a Mormon Bishop were to baptize a non believer, all it would be is a dead work. It matters not how much authority or righteousness the one baptizing has if the symbol behind the act has no registration on the consciousness of the one baptized.

On the other hand, if the one being baptized correctly registers the symbolic meaning on his consciousness, and is accepting of the one doing the baptizing, then the symbol will translate into living effect in his life. This can happen regardless of whether the one baptizing has authority from a church, angel or man.

Thus the dead symbol is translated into a living effect just as dead ink placed on a page can create words that can inspire millions for generations. We must keep in mind that it is not the ink or the paper that gives the true power to words like “to be or not to be,” but the meaning which is registered by the consciousness.

On the other hand, most of the great words of history would be lost if they were not preserved for us in physical form. Even so, few would comprehend the symbolic meaning of baptism and other ordinances if masters in the past had not developed a physical method of bringing forth the inner spiritual reality.

The group had a baptism at the 2001 gathering and I not only participated in the baptizing, but was baptized myself.

Because the symbols of the act bring forth the inner spiritual reality with much greater ease than meditation or spiritual will.

You could say that spiritual ordinances are the lazy man’s way to spiritual focus or experience. But even these require a correct state of mind and focus to bring the desired results.

A reader asks about the fact that the scriptures command all to be baptized. What does this mean when in reality many of the people of the world live and die without even understanding what baptism is?

The truth is that all must experience the meaning behind baptism. And what is that? Baptism represents the birth of the consciousness of Christ or the higher spiritual reality within the life of mortal man. Every religion (even those that do not baptize) teach about this higher spiritual birth in one form or another.

The Book of Mormon expresses this quite well:

“Know ye not that there are more nations than one? Know ye not that I, the Lord your God, have created all men, and that I remember those who are upon the isles of the sea; and that I rule in the heavens above and in the earth beneath; and I bring forth my word unto the children of men, yea, even upon all the nations of the earth?…

Now here is an interesting question for the Mormons, who of course accept the above words from the Book of Mormon. God here says he will “also speak to all nations of the earth and they shall write it.” General Christianity believes that God spoke to prophets of one nation, and a past nation at that – ancient Palestine. The Mormons go a step further and they have scriptures from basically two nations past – ancient America and Palestine. On the other hand, the Book of Mormon teaches that God will speak to “all nations.” All nations are definitely more than two.

Where are these scriptures from the other nations?

The answer is quite simple. Every people of every nation has available sacred writings containing truths geared for the “salvation” of the people to whom they were given. These writings can range from the sacred teachings of the Hopi Indians to the Koran of Islam, to the Bavagad Gita, to the ancient Vedas to the writings of Confucius, to the sayings of Buddha to name a few.

Notice what God says about these words of his to all nations: “I will judge the world, every man according to their works, according to that which is written.”

Thus those people who do not have the Christian scriptures, but have other words of God, will be judged by those words that are accepted by their own peoples.

All the scriptures of all the religions teach the principle behind baptism – a new spiritual birth. But not all of them teach about the physical act of baptism.

Notice that the above scripture tells us that each group will be judged by their own scriptures. Therefore if one joins a particular religion and the precept of that religion decrees that physical baptism is necessary then he is requited to comply to be a full participant in the group of which he is a member.

If one joins a fraternity he may be required to go through certain rituals to become a member. The same holds true for a church. It has the right to demand that all who join be baptized. The individual has the right to participate or not participate.

So how does the act of baptism affect our situation in the life after death?

If you are baptized yet do not experience a new spiritual birth then it will have no effect.

On the other hand, if you experience the principle of baptism by transferring consciousness from the carnal to the spiritual life, the positive effect will follow you after death whether you have been physically baptized or not.

The principle behind every teachings is what must be examined and then incorporated into the life of the seeker when his consciousness is ready.