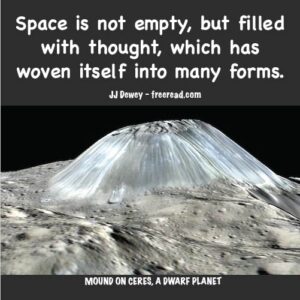 The Mystery of ETs

A reader asks about ETs and how they fit in the scheme of things. I have written a few things about them in the past, but have not put a lot of attention on them.

The main reason for not putting a lot of attention on them is that we humans here on the earth are responsible for our progression and the direction we take as a people and planet. ETs in space ships have no immediate mission to help us along or interfere with our destiny.

That said I will give you a few of my beliefs about ETs. They may or may not be true.

Physical self-conscious life dwelling on the surface of a planet with technology more advanced than ours is rare in the universe. The only ones capable of interstellar flight are members of the Brotherhood who have transcended physical reality and are capable of taking physical matter to the higher ethers where the speed of light can be transcended. When they reach their destination, they can recreate themselves on the physical plane and have interplay.

The Brotherhood only travel in spaceships when they have cargo that needs to be transported. Such cargo are various types of seeds and vegetation animals and other types of life for which to seed certain planets.

When taking a cargo is not necessary then an advanced member of the brotherhood can merely travel in his spiritual body and be born amongst us.

Then there are other times he may share a body with a willing disciple, using his eyes and ears as a way to explore our world.

Nature made the stars so far apart to prevent the interference of one system with another until they developed the spiritual technology to transcend space. When this technology is developed then the beings are responsible enough to not unduly interfere with other planetary lives.

The Dark Brotherhood on other planets can, through meditation, create etheric vehicles that are capable of reaching earth, but they are unable to descend to the physical once they get here. They are able to commune with their disciples on the earth who have a sympathetic vibration.

Even though the earth is the only planet in the solar system with physical life on its surface, it is not the only one with intelligent life for many planets have life in their higher etheric bodies. We are ahead of many sister planets because we have had more stimulation from advanced lives.

Every planet with a molten center has life either on its surface or its interior.

The gas giants like Jupiter and Saturn have lives that are gaseous and unlike anything science has imagined.

Even though the earth is the only planet with physical life on its surface, it is not the only one with intelligent life. On each planet there are other spheres made of the higher ethers and there intelligent life exists. There are many more self-conscious beings on the higher ethers than there are on the dense physical. The conditions for life on the physical plane are very demanding whereas on the higher planes the right conditions are more plentiful.

There is always rejoicing in a solar system when the conditions are met for self conscious physical life because there are opportunities for growth here that are not available elsewhere.

You’ll note that in many sightings of UFO’s the person will state that the ships made maneuvers that seemed impossible in physical reality. Some report a ship moving at incredible speed and then coming instantly to a full stop or a sharp turn that defies the laws of physics. The reason for this is the ships were not physical, but made of etheric matter and the chances are they came from this solar system rather than outside of it.

There is a lot of misinformation about ETs and UFOs. About 99% of what we hear reported on them is either not accurate or just not true.

There are three main reasons for this:

You’ll note that in most stories of visitation they are awakened from sleep. In many cases they are still asleep but are having an experience in a quasi-dream state. Sometimes it is real contact with etheric beings and other times it is their imagination playing tricks on them.

An LDS reader expressed disappointment that his religion doesn’t teach anything about ET’s.

Actually, I’m sure you are aware that life on other planets is taught in the LDS scriptures so the fact that there are ETs out there should already be incorporated to a degree. Here are several LDS scriptures pointing this out:

“And he beheld many lands; and each land was called earth, and there were inhabitants on the face thereof.” MOSES 1:29

“But only an account of this earth, and the inhabitants thereof, give I unto you. For behold, there are many worlds that have passed away by the word of my power. And there are many that now stand, and innumerable are they unto man; but all things are numbered unto me, for they are mine and I know them.” MOSES 1:35

What is not taught in the LDS scriptures is anything about UFOs, but even if they do exist it doesn’t change much. Any ETs would be much like us traveling through a series of lifetimes until liberation is achieved.

Question: How do ETs fit into the spiritual plan?

Each planet with life has a Hierarchy within a greater Hierarchy of a solar system. The God who is the head of this earth is the Ancient of Days and is a disciple of the Solar Logos who dwells in the Sun in refined matter in a state of livingness incomprehensible to humans. Our star system is one of seven systems composing a greater Hierarchy. The head of this greater system is so advanced he is merely called “The One About Whom Naught Can Be Said.” The reason he is called this is that his consciousness is beyond the reach of even the Masters. All they can do is register his influence and know of his existence.

Contrary to popular belief, the Spiritual Hierarchies in the universe are created from the bottom up rather than the top down. In other words, once you go so far up you will discover new Hierarchies in the process of creation. How far above The One About Whom Naught Can Be Said does the reach of Hierarchy extend? This is not given.

Hierarchies which exist on a fairly equal basis cooperate with each other. For instance, the Logos of Venus and Earth are closely related for our Logos came from Venus. Significant sharing goes on between the various planetary hierarchies.

The Hierarchies of our solar system have a close connection with the system of Sirius. The planets around Sirius do not have advanced humans in the dense physical, but the system has a very advanced brotherhood in the higher ethers. This Sirius Brotherhood of Light is in a system of a sun many times as brilliant as our sun and shares its light and intelligence with our hierarchies.

All this has nothing to do with ETs as the world sees them, but they are extraterrestrial nonetheless.

Any ETs who have advanced technology would be under the hierarchy of their native planet and would be subject to working out their liberation just as we are.

Question: Is there any truth to the  channeled information out thee concerning galactic wars?

Most of what you hear about galactic war and federations is from unreliable channeled material who got their inspiration from Star Trek.

There is no such thing as an intergalactic war. There are over 200 billion star systems in this galaxy alone and not with advanced enough humans who are close enough together to even war among themselves on the physical plane. The current universe is young yet and when we explore other solar systems, we will find that most of them have been untouched by any federation and are waiting our assistance in their development. The inhabitants of this planet are one of the seeds of the galaxy which will sprout and grow to other systems.

The only real federations in the galaxy are the two brotherhoods who are not connected in the dense physical.

Question: What role do ETs play in the formulation of earthly theology?

The ET in a spaceship has little or nothing to do with earthly theology. Theology and doctrine has been developed through earthly lives who have contacted their souls or higher lives connected with this earth.

Question: Do the various population centers of the various ET races have isolated heavens where the departed spirits between lifetimes reside, or is there commerce between them?

Normally between lifetimes entities will dwell in the astral and mental spheres of their own planet. Each person has a ring-pass-not that they cannot pass because of the limitations of his consciousness. Those with higher consciousness may visit other planets within our system but sometimes outside of our system.

Question: What about the “hellish” post mortality experience that some who have lived horrible lives experience? Is there commerce (interaction) between the hells of the various population centers of the galaxy?

Not for the normal hell where the person is condemning himself and punishing himself with guilt. However, both the light and dark brotherhoods have overcome the problem of guilt, but by using two different methods. The Dark Brothers have seared the conscience with a “hot iron,” as the scriptures say, and the Brotherhood of Light have transcended guilt through understanding the Love of God, or the Atonement as taught in the scriptures. Thus do the advanced Dark Brothers have their own brand of liberation (which is temporary) which allows them some interplanetary contact in the lower ethers.

They do not see themselves as being in hell because they are not suffering with guilt. Even so, they dwell in a kingdom of shadows with no glory from the light of God.

Question: Can I choose to incarnate on a different planet in my next life?

Where you incarnate is associated with your ring-pass-not which keeps you in a system until you learn the lessons of that system.

Question: Is it conceivable that advanced beings from ET races occasionally incarnate in our civilization to help us accomplish certain things.

Yes, a certain number do this and is happening with increased regularity.

“It is said that power corrupts, but actually it’s more true that power attracts the corruptible. The sane are usually attracted by other things than power.” David Brin (1950 -)