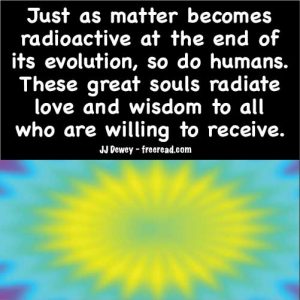 The Masters and the Reappearance

A reader comments on the statement by DK that two fifths of the planet’s population will be taken off the planet, and assumes that these souls will be going to another Earth-like planet to bring about their growth, because they are too stuck in the Piscean Age thoughtforms and materialism etc.

JJ: This event has little to do with the current Aquarian or passing Piscean age, but will happen far in the future. Mankind has to evolve through seven races all together and we are polarized now in the fifth. We still have the sixth and seventh to go which may take millions of years to complete. When our evolution is complete in this far future then 60% of humanity will “graduate” to higher spheres. The 40% will have to await the creation of another earth-like planet to complete their lessons.

They will be smarter and more seasoned than the younger souls there, yet certain resistances must be worn down or the younger ones will pass them up.

Another reader asks if this isn’t the same thing as “rapture” referred to in the book of Revelation is it?

One way to interpret the rapture would be to apply it to the 60% who will go to higher spheres at the true end of this world, ages hence. There is no literal rapture planned for the present coming of Christ. The only way something even close to it would take place is if the Plan of Christ is frustrated by the Dark Brothers and it looked like all life on earth may be destroyed.

This is not expected to happen and will not happen if disciples do their jobs. Even so, humanity has its free will and can always choose the destructive path. The future is not set in stone, but the strong probability is that we will face numerous points of crisis, but survive and rise above them with the human race intact.

Question: Is Saint Germain a Master of the Seventh Ray or is a Chohan a Lord?

The master of the seventh Ray was the Master Rakoczi. But in the 1940’s he was moved to preside over the third Ray as Master of Civilization. Of him DK writes:

“He is a Hungarian, and has a home in the Carpathian Mountains, and was at one time a well-known figure at the Hungarian Court. Reference to Him can be found in old historical books, and He was particularly before the public eye when he was the Comte de St. Germain, and earlier still when he was both Roger Bacon and later, Francis Bacon. It is interesting to note that as the Master R. takes hold, on the inner planes, of affairs in Europe, His name as Francis Bacon is coming before the public eye in the Bacon-Shakespeare controversy. He is rather a small, spare man, with pointed black beard, and smooth black hair, and does not take as many pupils as do the Masters previously mentioned.” Initiation, Human and Solar, Page 59

The name of the Master who currently heads the Seventh Ray is not given as far as I know.

Question: Are there 49 Masters of the Seven subrays? Or only seven Lords of the rays?

JJ: DK also gives some information on this:

“The Hierarchy works also through the seven major Ashrams and their affiliated Ashrams, and these “seven which are the forty-nine” represent in their totality the seven rays with their subrays, and are the custodians, transmitters and distributors of the seven ray energies to the seven planetary centres and-via these seven centres-to those in the fourth kingdom in nature (as they gradually unfold over the aeons) and then, via these, to the seven centres in individual man. Such is the synthesis.

“The seven major centres or Ashrams within the Hierarchy are each presided over by Masters of Chohan rank; the seven subsidiary centres or Ashrams are presided over by Masters and Adepts (of the fifth and fourth initiations), aided by initiates of the third degree and certain picked and senior disciples. Several of the seven affiliated Ashrams are, as yet, incomplete as regards personnel, but vacancies are rapidly being filled as the spiritual effects of the world war (1914-1945) make themselves felt. These effects are very real and have been a source of great encouragement to hierarchical workers.” Externalization of the Hierarchy, Page 527

The seven lords who preside over the seven rays for the solar system are the planetary Logi over the seven sacred planets. These are Vulcan (a hidden planet) Mercury, Venus, Jupiter, Saturn, Neptune and Uranus. Saturn is most closely linked to the earth since both Earth and Saturn are on Ray three. Jehovah who appeared to Moses represented the Logos of Saturn and was on this ray himself.

Christ is the Master of the Second Ray of Love-Wisdom.

Question: I have heard you quote DK as saying that Jesus was incarnated in Syria, but I didn’t know, according to your writings, that the Christ was here as well. If they are both here in physical bodies, etc. Then what are we waiting for? What second coming?

JJ: This is why DK calls the Second Coming the “Reappearance.” He quotes the scripture where he promises “I will be with you always even until the end of the age.” Then he tells us that the Christ has never left, that he currently lives in a physical body not far from DK on the borders of Tibet. This does not mean that he is limited to a physical body as I am sure he can transcend it at any time and work out of the body.

A Master as advanced as the Christ has power to unfold his physical body and be born again as a babe if the need arises, or he can travel in his spiritual body to overshadow a disciple if the need arises. He can also through meditation commune with numerous disciples and give them inspiration which is not as direct a contact as overshadowing.

Here is a quote from DK citing the various alternatives and problems faced by the masters in their appearance:

“How will these Members of the Hierarchy in Their various grades appear on earth? Will They come through the methods of ordinary birth, of childhood and maturity? Some initiates may follow this ordinary pattern, some are already passing through it today and are in the stages of infancy and adolescence; to them will be given a large share of the preparatory work. Some will not pass through these relatively limiting phases, but will pass back and forth between the outer world and the world of hierarchical endeavor; they will be sometimes present in physical bodies and sometimes not. This method of activity will not be possible as long as the present rules of national and civilian identification, of passports and of drastic airport and seaport inspection are required by the authorities; such people as these “transitting initiates” would not be able to identify themselves. This form of appearance is therefore postponed for some time. Some of the Masters will create what is called in the language of the East the “mayavirupa” – a vehicle of expression which is built of atomic physical and astral substance and of concrete mental substance. This They can create at will, use at will and cause to vanish at will; Their problem is not, therefore, so acute in the matter of appearing and of reappearing as is that of the initiate who cannot thus create to suit his purpose and his service.

“Will all the Members of the Hierarchy make Their appearance at the same time? Certainly not. The appearing of these initiates and Masters will begin with isolated members appearing and living among men, coming forth one by one, doing the required work, returning through the portals of apparent death to the inner subjective Ashram, and then again appearing by one or other of the methods mentioned above. This process has been going on for some time and began around the year 1860.” The Externalization of the Hierarchy – Section IV – Stages in the Externalization

Question: If this is not the second coming, what will the difference be?  If the Christ can incarnate now in his own body, why couldn’t he do the same 2000 years ago?

[1] Jesus saved him 30 years of wasted time in preparing a vehicle for him. This allowed him to be able to attend to his various duties during this time.

[2] The karma of the planet dictates how close a high entity like this can approach us. For instance, our Karma and vibration of humanity does not allow the Ancient of Days to directly incarnate at this time. He will come though during the Seventh root race.

Question: Where is the Christ, and what’s he doing? What’s his chosen line of work?

JJ: DK tells us that the Christ is presently in a physical body. Currently he is the leader of the Hierarchy and guides and teaches them as well as works in the Spirit with numerous incarnated disciples.

Question: If Jesus and/or the Christ are in physical bodies on the earth, are they conscious of who they are/were? Do they have to pass through the same initiations as before?

JJ: Unless one of them is born as a baby they will be aware of who they are. If they incarnate they will have to reach maturity first.

If the Christ has incarnated or will soon, this information will not be given to the public as many would-be disciples full of glamour would claim to be him or be having him as a baby. If he does incarnate he will not reveal who he is for some time except through his works

“They come with no herald, and only Their works will proclaim Them.” Treatise on Cosmic Fire, Page 760