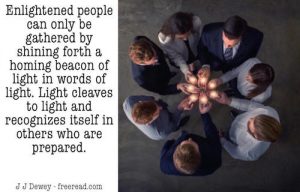 Preparing for the Reappearance

DK writes: “The reason He has not come again is that the needed work has not been done by his followers in all countries.” The Reappearance of the Christ, Page 12

It’s been many years since he wrote this. Has much preparation been done in this time? What else needs done to prepare for the coming of the Lord?

We received a number of good comments from this question such as:

A reader here has identified an area of true progress which has been made. The progress we have made in rights has definitely been a step in the right direction, but unfortunately the pendulum has swung to the other extreme to the point where many are fanatical in this respect, even attempting to give vegetation and animals the same rights as humans. This has been the cause of excessive litigation and division among the people.

The solution boils down to the principle of right human relations. When we learn to treat our brother with civility and kindness and attain some ability to compromise all the other problems will become manageable.

The problem of right human relations is coming to a point of tension with the coming U.S. election. Even if there is a clear winner we will have a problem of acceptance, but God forbid, if there is another disputed election, we are likely to have something close to a civil war.

Here are some other things which have been accomplished since 1945 which improve the conditions for the coming of Christ.

What yet needs done?

When these three conflicts are resolved to the point where good will can prevail then a major roadblock to the coming of Christ will be removed.

Question: What if humanity fails and the needed preparations are not done? What will happen then?

The answer really lies hidden in another question. How bad is the negligence of humanity in preparing the way of Christ?

If the needed preparations are made then he will come within a generation and fulfill his mission.

On the other hand, if disciples and humanity are negligent the results depend upon the degree of failure.

If the failure is such that the mistakes can be corrected then there may be delays with a successful return but the mission will be accomplished. The Christ may decide to use an overshadowing rather than a direct appearance.

If the negligence is bad enough then we have to worry about the prophecy of Elijah coming true. Below is an edited version of a previous post elaborating on this.

“Behold, I will send you Elijah the prophet before the coming of the great and dreadful day of the Lord: And he shall turn the heart of the fathers to the children, and the heart of the children to their fathers, lest I come and smite the earth with a curse..” Malachi 4:5-6

“Come against her from the utmost border, open her storehouses: cast her up as heaps, and destroy her utterly (CHARAM): let nothing of her be left.” Jeremiah 50:26

The first question is what is meant by the children turning their hearts to their fathers?

Because history repeats itself if we do not learn the lessons of our fathers. This is one reason why the study of the rise of Nazi Germany and Hitler are so important. If we understand what happened there, we can prevent another antichrist from coming to the surface. A Hitler in this age would be much more dangerous than one previously because we now have the power to destroy human existence as we know it.

Thus, one key to preventing the “utter destruction” of the earth is to learn from the mistakes of our fathers.

Too many Bible believers have withdrawn their responsibility to make the world better for our children. Instead they sit around waiting for God to destroy the world and wind up being of no use to God or man in the process.

“Learn the lessons of history and leave a world for our children a better place than we found it.”

We are on the cusp of a new era and have learned some things and do have enough people on the earth with enough light to make a difference. If good men do nothing but wait for doom, we are indeed doomed; but if good people follow the highest they know and seek guidance of the Holy Spirit, then salvation will be ours and this salvation is what I teach without apology.

“Security is an illusion. Life is either a daring adventure or it is nothing at all.” Helen Keller