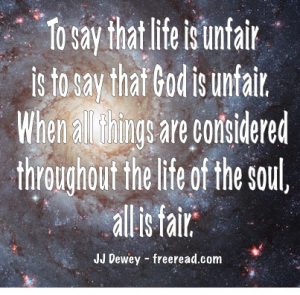 Many people wonder how karma will be paid off or if it is even necessary if the offender learns his lesson and changes his behavior. And how about someone like Hitler who was responsible for killing millions of people? Will he have to be reborn and murdered again and again to pay for his deeds? Or how about a burglar who has robbed from many homes? How can he pay his debt?

The trouble we have here in our understanding is that we tend to examine forgiveness through the eyes of the fundamentalist religions which tend to see God on some yonder throne making decisions as to how much each person needs to be punished before he is forgiven. Then after he has either been punished to the maximum or performed a necessary ritual he wipes the slate clean.

This simplistic view works good as a teaching mechanism for the spiritual infants of the world who see God as an amplified Santa Claus, but there comes a time that the seeker realizes that the Santa Claus God is an illusion and wants a more logical reason behind the true disciplines and gifts of the Father/Mother/It God.

The truth is that when God switches from the state of Being to BECOMING the worlds of form were created and as a result of God reflecting Itself and, having plunged into form, certain laws became manifest that were a natural result of the creation of God and even God Itself had no power to determine exactly how the laws would materialize. God did not say – I am going to create the universe and in it I am going to make a law of cause and effect. Instead He created the universe and within this universe the reflections of God discovered that the law of cause and effect is an inherent principle that eternally exists within any creation of form. The reflections also discovered other laws such as gravity, the polarities of positive and negative, inertia and other principles that just ARE. The reflections discovered that the principles that just are cannot be altered or changed but must be mastered and used to mold creation to a desired end. That desired end is that which we DECIDE and creates the process of BECOMING.

The lives higher than human, who are so advanced that they seem as gods to us, have learned and mastered many principles that have given them a great deal of power and freedom, but only because they work with what is rather than what is not.

Whereas the law of cause and effect is an eternal principle, forgiveness is not. Forgiveness is a temporary measure that manifests in the state of illusion. The illusion that makes forgiveness seem real is the idea that there is something to forgive, as The Course in Miracles teaches. As a reflection of God you are invulnerable and as such there is nothing anyone can do to hurt you in the real sense. This is a realization that all Masters who have overcome death have attained. Once this understanding is incorporated into our being then forgiveness no longer exists or is possible because there is never anything to forgive.

But even those who have attained this high realization still have to deal with the law of cause and effect because this law is no illusion as it relates to creation.

Cause and effect (or karma) applies to the universe, galaxies, suns, planets, humans and even atoms… there is no escape as long as we are experiencing the life principle.

Some gurus argue with this by saying: “My consciousness is so high that I am one with a beingness that is beyond cause and effect.”

The trouble is that many read teachings about some ultimate reality that is beyond cause and effect and they immediately assume that this is the next step for them. Then after a short period of contemplation they assume they have taken that step and they then enter a world of illusion where they see themselves as untouchable by the normal laws of being. Entities who enter this illusion often receive a painful and alarming awakening by the law of cause and effect from which they see themselves immune. Sooner or later they are forced into the realization that they have not left the laws of the universe behind but must deal with what is.

Let us use a car as an example of this law. You get in your car and head out to the freeway and accelerate to seventy miles an hour and then put on the cruise control. You have now created cause that has the effect of making you cruise down the road at a certain speed.

Now that this cause and effect is a reality in this part of creation let us say that for some reason you want to change this situation and bring your car to a stop. If forgiveness has any effect on karma (or cause and effect) then all you would have to do is say to your car: “I forgive you for going seventy miles an hour and because I forgive you I expect you to stop.!”

This seems like an obviously silly thing to do because there is nothing to forgive and even if there was it would not effect the speed of the car.

So it is with the burglar. Seen from the reality of cause and effect there is nothing to forgive and even if we think there is, nothing changes.

Let’s get back to the speeding car. Suppose you blurt out a mantra decreeing: “I see myself in the Eternal Now and decree that all is still!”

Does your car stop?

Because you created no cause.

So how do you stop the car?

There are several ways.

The worst method is to run head on to an opposing vehicle. This would stop you dead in your tracts in an undesirable manner.

You could run into a stationary object such as a building or a cow. This would also stop you, but is also undesirable.

You could take the cruise control and acceleration off and let natural resistances outside of yourself cause you to slow a stop.

But perhaps this method of stopping takes much longer than you desire. So what else can you do? Aha! You discover a device called a brake that works with cause and effect in the real world, and using such device you can bring yourself to a quick and secure stop. You have not negated the law, but worked with the law with intelligence so your desired end is achieved and under your control.

So the burglar has created a thousand burglaries or a thousand causes so his car is going at the terrible speed of a thousand miles an hour. Now he wants to stop because he has discovered he is going the wrong direction. He needs to slow to zero, turn around and go the other direction. How does he do this?

(1) First he must realize that there are causes in motion that he must steer correctly. If he does not he is likely to have a collision and come to a disastrous stop which will take a long period of pain and healing from which to recover.

(2) He can turn off his cruise control and release the acceleration (stop committing burglaries) and let natural causes from the opposing direction bring you to zero.

(3) The burglar experiences an epiphany and ceases his bad behavior, but he decides to just “go with the flow” and applies no intelligence to using the law of cause and effect in his favor. Thus what brings him to zero are a thousand negative resisting experiences happening to him. This stretches the pain out over a long period of time, but is still undesirable.

(4) The final and most desirable method of coming to a stop is to apply the brakes. Consider the miracle of the brake. A frail 100 pound weakling can apply a small pressure with his foot and bring a vehicle weighing tons to a complete stop in seconds, much faster than using the going with the flow idea. The brake applies the leverage principle wherein a pound of pressure can create a thousand pounds of resistance through intelligent application of law and materials.

So how does the burglar apply the leverage principle so he does not have to suffer the equivalent of a thousand thefts himself?

First he must come to the realization that he is going the wrong direction and take off the cruise control and acceleration (stop burglarizing homes). Then he must obtain a sense and awareness of his situation. He must become aware of his speed and direction and he must do something to slow to zero so he can head in a positive direction. Once he obtains a sense of the energy (service) that is required to stop he then seeks power to manipulate this force.

There are a number of ways the wise burglar can neutralize this energy of negative karma; here is one.

The burglar changes his ways and seeks to live by the highest that he knows. As he does this he achieves a degree of soul contact and begins to get direction from within which tells him that he should strive to succeed and do good works to help his brothers and sisters. He follows this impulse and starts a business and becomes successful. After he achieves considerable wealth his inner self tells him he should be generous with his good fortune. He then sets up a scholarship program that helps a thousand kids go to college and improve their lives. This then becomes a lever that puts a brake on the great debt that he owes and brings his karma to a complete stop much quicker than going with the flow will ever accomplish. In addition, he pays off his debt through joyous service rather than painful experiences.

This also illustrates the beauty of BECOMING. As we become that which we decide to become we discover more levers that give us accelerating power to make our decisions a reality. We receive joy and peace as additional levers are registered by our consciousness and used with wisdom. In fact the Brotherhood of Light are often called the Masters of Wisdom.