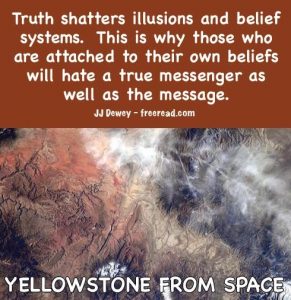 Jesus had some pretty strong words for people who considered themselves the enlightened in his day:

Alas for you, lawyers and Pharisees, hypocrites ! You build up the tombs of the prophets and embellish the monuments of the saints, and you say, “If we had been alive in our fathers’ time, we should never have taken part with them in the murder of the prophets.” So you acknowledge that you are the sons of the men who killed the prophets. Go on then, finish off what your fathers began!

You snakes, you vipers’ brood, how can you escape being condemned to hell? I send you therefore prophets, sages, and teachers; some of them you will kill and crucify, others you will flog in your synagogues and hound from city to city. Matt 23:29-34 New English

Notice that these people who are now known for participating in the crucifixion of Christ and the later persecution of his followers to prison and to death thought that if they had lived in the days of the prophets, such as Moses, Jeremiah or Elijah, they would not have rejected them or sought their lives. Surely, they thought that they would have stepped forward to help. They would have stood with Moses and not worshipped the golden calf. They would not have thrown Jeremiah in a pit, nor would they need Elijah to bring fire from heaven to prove he was a prophet. They saw themselves as the good guys in the present who would have also been the good guys in the past.

Jesus, who must have heard such talk in their conversations, replied starkly that they did not see themselves correctly. If they had lived in the days of the prophets they would have shared in the mob mentality and soon in the present they would prove Jesus correct by showing their true colors.

This incident gives us good food for thought for our own consideration. We need to ask ourselves that had we lived in the days of Jesus would we had been one of the 120 that believed on him after the crucifixion, or even during his life?

He tells us that he will come again. Most Christians think he will come in such a blaze of glory that it will be obvious who he is, but suppose he comes again like he did last time – as a regular mortal.

How many would recognize him then?

Djwhal Khul through Alice A. Bailey gave out many teachings and has many followers in the esoteric world. He tells us that he will teach again around 2025.

Suppose that there are a dozen people claiming to be his new vessel. Do you think that you could pick the real one? And what if none of them represented the true DK?

After all, students will recall that he did not reveal who he was last time. Someone else let his identity slip out against his will.

So it may be possible that none of the claimants will represent the real DK. The real vessel may be an unknown who just posts enlightening material on the internet.

And suppose the real spokesperson says something positive about a controversial Republican or Democrat? Would this cause you to write the whole of the teachings off?

I guarantee this would happen with many.

One of the reasons that enlightened prophets and teachers are rejected by the very ones who are supposed to be expecting them is this. The Spiritual Hierarchy does not like to repeat itself. If a teaching is out there and it is clearly written then it violates the law of economy to just repeat it again. All any regular mortal has to do is reference a page number.

When a true teacher arrives he will present something new and different – something thought provoking that will stimulate thinking and move forward spiritual evolution.

In the days of Jesus the devout were expecting a messiah. Some were expecting him to come in a blaze of glory, similar to the Christian expectation of the Second Coming today. Others saw him as one like Moses who would deliver them from the Romans as Moses delivered he Israelites from Egypt.

As far as teachings go they expected an extension of the Lawgiver, Moses, who would place great emphasis on living the letter of the law.

As it turned out, Jesus was none of these things. He didn’t deliver the people from the Romans. He not only didn’t place emphasis on the law, but seemed to disregard it. Instead of concentrating on refining the law he had a new message centered on love. They had never heard anyone teach such a thing before.

Since Jesus did not correspond to their expectations they rejected him outright and put him to death for blasphemy.

It is interesting to contemplate what he will teach when he comes again. Most are expecting a repeat of what he gave us last time. These are likely to be disappointed and not recognize him. Of course, he will not contradict what he gave out last time, but we must be prepared for the fact that he will teach many new things that will far surpass what we have in the Bible.

And how about DK? Again the new teachings will be in harmony with those given through Alice A. Bailey but he will move on to new material, much of which may be rejected by Bailey students, just because they are new and different.

The last time he taught we went through a great division resulting in World War II. He was one of the few teachers that called it right on Hitler from the beginning. Most teachers either tolerated him or embraced much of what he stood for. Just before the war almost every prediction from the alternative folks was there was nothing to worry about, that there would be no war.

If, when he teaches again, we are still in a state of great political conflict as we are today he may give out some controversial teachings and mantras in an attempt to bring students together as he did last time. Will those who are attached to their ideals reject him just as the idealists did last time?

Unfortunately, it is often the case that several generations must pass before the true avatars are recognized by the many, or even a significant number. But let us hope that we can raise our consciousness up so we can appreciate true messengers when they are here in front of our eyes, instead of merely participating in building beautiful monuments to their name after they are gone.