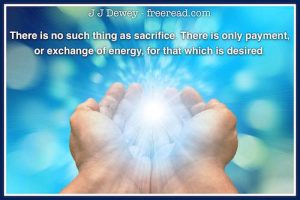 The Law of Sacrifice

What is destroyed when the destroying aspect of the Law of Sacrifice is wielded? If something is destroyed then why can we say there is no true loss?

What do you suppose the building aspect is?

What is the difference between the building and destroying aspects of the Law of Sacrifice?

We’ve had several good responses on these fairly esoteric questions.

Reader Comment #1: What is destroyed depends upon what the sacrifice entails. I think it would could be your security, comfort, freedom, or even your life that could be destroyed if the circumstance were one in which a person were taking the right steps to protect or to progress for the greater good of the whole. There would be no real loss in the grand deign of all things because the design is one in which that in which when you give, you receive, so following the same philosophy when you sacrifice now you gain later.

Comment #2: Ask Gov. Arnold how he built his muscles. By exercise and weight-lifting, he broke down his muscle tissue, so his body could build bigger and better muscle tissue in order to meet the demands placed upon them.

Comment #3: The lower physical sheaths are destroyed during the second, third and fourth initiations. The gain is a new unobstructed view. One’s ‘ring-pass-not’ is increased. Losing the chains (matter) which bind us to continual re-birth in this earth scheme can never be considered a loss. Unless you are on the dark path.

These are all good comments on the destroying aspect of sacrifice. Stronger muscles are created by breaking down tissue. This is a good example of how this destroying aspect merely removes impediments so something better and stronger can be created.

DK makes the interesting statement that this destroying aspect is at play in the second, third and fourth initiations. But the revealing question is why is it not at play in the first?

While it is true that there are many sacrifices made over many lifetimes to bring the pilgrim to this point, the actual movement into the Christ consciousness does not require a sacrifice. What it does require is intense seeking on the part of the individual and the end of the search involves the touching of a spiritual energy that is very desirable and seems at the time to be the complete answer to his quest. The seeker thus moves into this initiation with great willingness, which does not require a “giving up” at the time.

Afterwards, some sacrifice is required in order maintained the ground which has been acquired, but overall this first initiation is almost like a reward for many lifetimes of effort.

The second initiation does indeed require sacrifice for the seeker must give up his glamours. As he approaches this he sees himself as an extremely important individual in ways that he is not so important. He must sacrifice this powerful ego and see himself as he really is in relation to his fellow men.

This step down is seen as a great sacrifice, but one that is necessary in order to take a step up.

The third initiation is also difficult but this time the seeker must sacrifice his illusions which have seemed to serve him so well – giving him a stable belief system.

When this sacrifice is made all that he holds dear that supports his beliefs must be released. The sacrifice seems enormous, but the following reward is great. The disciple enters into the Angel of the Presence and gains a new enlightenment that was worth whatever price that was paid.

Finally the disciple goes through the fourth initiation where he must yield up every desire of his heart for a greater good that he may not even understand. It will seem that he has sacrificed all and there is nothing else to give. All seems gone and the only thing he has left is divine faith that ultimate good will be realized.

Then to his joy his faith pays off and that which is lost is discovered to be unreal and that which replaces it is the real. Once the real is found he will never go back to the desire world which held him bound.

Thus do these initiations illustrate the destructive aspect of the Law of Sacrifice. That which seemed good was destroyed and was replaced by something of greater worth.

The building aspect is something quite different. Under the destroying aspect we seem to be at the mercy of an unknown God and the sacrifice made involves an exercise of faith that good will prevail.

Under the building aspect the seeker understands the Law of sacrifice and instead of being a pawn in the hand of Higher Powers he uses the law constructively to attain a desired goal. He then exchanges one thing for another to move forward rather than losing all for who knows what.

Under the destroying aspect the disciple does not see or understand the end, but under the building aspect he sees and understands. It’s like getting interest on a loans. He knows why he is doing it.

Those who use the building aspect relate to these words from DK: “Sacrifice must not be regarded as a ‘giving-up,’ but rather as a ‘taking-over.’ It has a mysterious relation to the Law of Karma, but on such high levels that only the advanced initiate can grasp it.” Discipleship in the New Age, Vol 2, Pages 286-287

The Law of Sacrifice is one of the seven minor laws which governs human evolution.

DK talks about three major laws that we will first discuss before proceeding, which are:

These are somewhat interrelated but we shall discuss them one at a time as much as possible.

Dk says this about the three great laws: As a human being, the disciple was ruled and conditioned by the cosmic Law of Economy, along with its various subsidiary laws which were active and conditioning in the three worlds of human evolution. This law is the basic law of nature and of the natural evolving man. After the first initiation, he comes under the Law of Attraction which carries and wields the energy of love and-though the Law of Economy is then abrogated-it preserves an habitual control over the habitual process of the form vehicles which are now used under the Law of Attraction; this law works within the consciousness of man and also within the forms in the service of the Hierarchy. This Law of Attraction is a major soul law.

Later, after the fourth initiation, the disciple comes increasingly under the Law of Synthesis, which is the major Law of the Spirit in the universe. His capacity then to include rapidly develops and his sense of awareness can (after the sixth Initiation of Decision) begin to range in an extra-planetary fashion. The meaning of all this may be only theoretical, as far as your understanding may be concerned; its significance must be carefully sought and this will not, by any means, prove an easy matter. Revelation will, however, come if you study what is said about these three major laws in A Treatise on Cosmic Fire.

What is this first great Law that he calls the Law of Economy and what is the principle behind it?

My roommate got a pet elephant. Then it got lost. It’s in the apartment; somewhere.