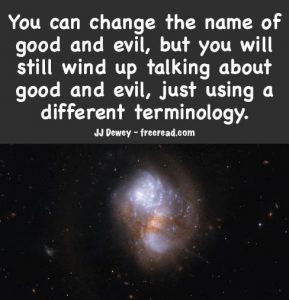 The main word of interest here is the Greek EPOURANIOS. In the King James this is translated 16 times as “heavenly” as in heavenly Father, twice as celestial and only once as “high places” in this particular verse.

One can easily see why many translators are hesitant to render this verse as it reads as the meaning does not seem to make sense. After all, is not the place where God and celestial beings reside a perfect place where no evil can possibly exist? Why then would Paul tell us that one of our enemies is wickedness in heaven itself.

It is indeed disturbing for many to contemplate that even heaven or the higher worlds may not be perfect places. You may recall that we discussed perfection earlier and concluded that the concept is an illusion and not even taught in the Bible. The word perfection there in relation to God is mistranslated and the original word merely implies that God correctly finishes what He starts.

The big question is how could there be evil in the higher realms and what would that evil be? Could we recognize celestial evil if it stared us in the face?

Before we explore this topic let us make clear that the Dark Brotherhood is not a part of this celestial evil. The disciple here on the earth can clearly see that the direction of the Dark Brothers is incorrect. These entities have taken a definite stand toward selfishness and are of a low vibration. However, the inhabitants of the celestial worlds are clothed with light and filled with love. How could evil manifest in such a place?

We need to be reminded of this point to solve the mystery.

Evil does not manifest as a killer demon tearing everything in its path from limb to limb, but evil can manifest in all spheres and places. Evil means to reverse direction from progression to retrogression and a heavenly being can do this as well as a worm. If a heavenly being does this we may notice no lack of love and light from him or her from our vantage point.

Remember the analogy of Hitler’s Dog. As long as the dog gets attention and food Hitler will seem like as good of a person as Mother Teresa. Hitler’s dog had no idea of the higher conflict that was going on beyond his understanding.

Even so it is with us. We have heard that a great light who was Lucifer fell from heaven, but we have little understanding about the cause. A hint to the key to understanding evil and why death is associated with it lies in these two key words:

As far as will and decision go let me add this. Will cannot exist without decision for Will is a motivating force to bring that which has been decided into existence. The first decision was “TO BE.” After this took place, Will became manifest causing us TO BECOME. The only thing within human comprehension that existed before decision was PURPOSE. This attribute is not purpose as we understand it but an underlying intelligence that is the Prime Cause of all things.

The reason that evil is associated with death and good with life is that death is generally seen as the breaking up of a form or forces because the attention of the soul has been withdrawn from it. Life is seen as good because life is caused by the flowing forth of the soul through the focused attention of the life of the soul. Life is a gathering of forms or forces around a point of decision wherein we have the power of attention focused.

A key to the great mystery I am pointing you toward is hinted at in the ancient phrase: “energy follows thought.” Perhaps it could be more accurately worded as follows:

“Energy follows thought which is held by focused attention.”

We move ahead or backward in evolution according to where we place our focused thought. Thus, the disciple is on the path of light (the good path so to speak) if his focused thought is on the true advancement of himself or his group.

On the other hand, the wayfarer is on the path of darkness and death if his focused attention is returning to lesser evolution, lesser advancement or lesser light.

Why would one place attention on becoming as one who is less evolved?

Answer: Sometimes it is pure selfishness but it usually begins as a selfish interest which is stimulated by a deception. When this occurs the deception is eventually revealed and then the pilgrim must make a definite obvious decision between the left and right hand path. The trouble with the great deception here is that by the time it is unraveled the person is so attached to his selfish interest that the turning around is very difficult.

I said that two key words to understand this mystery is “reversal” and “attention.” This reversal can happen to any being so long as there is free will. However, as we climb the ladder of spiritual progress the number of entities who turn around in their progress lessens because as we move toward greater and greater light it becomes more obvious that it is indeed wisdom to continue forward. However, after we finish one long cycle of spiritual evolution then, after a period of rest, we will begin another with temptations anew and perils unlike any encountered before.

Therefore eternal good is eternal BECOMING or eternally moving forward to greater life. Eternal evil is to cease becoming and to “to be” that which was in the past, a different thing that the being of the Eternal Presence.

So, what happens to one who reverses his movement forward?

Answer: First it must be understood that a reversal in progression does not come in a single moment or a single life, but solidifies over a fairly long period of time. As we move forward in our progress we enjoy the life of the soul flowing through us, but when we make a mistake and slip into reverse we begin to feel a great absence of soul or a vacuum where the power of life and purpose seems lacking. At this point most will sense that something is wrong and seek correction and eventually find their way back into forward motion. Only those who are very stubborn and selfish will ignore all the warning signs and place their full attention on going backwards. When one then makes a definite decision to serve self at the expense of the soul then a very significant event happens.

At the point of definite reversal with no energy directed toward the path of evolution then there is no attention on the soul or spirit. To understand this we must realize that energy does follow thought and if there is no energy on the higher then all energy follows the line of least resistance toward the lower.

We are all composite beings made of many lesser lives and to maintain the cohesive force to keep the lower lives together to maintain the higher, attention must be focused on the higher energies of soul. Without this attention and the drawing forth of spiritual power then the forces holding the lesser lives becomes diminished until eventually the lesser lives come apart and return to their native element. This produces a death or disintegration of the person as he is.

This is comparable to a water molecule of two atoms of hydrogen and one of oxygen which has been together for millions of years falling apart and returning to the two separate gasses of hydrogen and oxygen – no longer having the properties of water.

So what happens to those few stubborn humans who succeed in reversing themselves on the path?

Answer: The lesser lives that make the greater begin to come apart and as they do the person begins to lose human attributes and take on the characteristics of the next kingdom down which is the animal. The strongest animal lives within him take control of the life until it falls apart. After this the animal lives revert to the vegetable and finally to the mineral and lastly to a pralaya that lasts many millions of years. The person’s evolution must then begin anew in a far future creation.

Can one higher than human make a reversal?

What would happen if a Master made a reversal?

Just as a human reverts to an animal when making a reversal even so a Master reverts to becoming human and later to the animal.

Above the Kingdom of God where dwells the Kumaras is Shamballa. A known reversal that occurred there was one who had the position of Lucifer – the Lightbringer. Because of his reversal he placed himself in danger of disintegration, or of breaking down to its component parts. This is why the scripture tells us that “he knoweth that his time is short.”

We are therefore on one of two paths:

(1) The path of Life where Spirit is increasing in power as we share greater union with an increasing number of lives.

(2) The path of death where the power of Spirit is diminishing and the lesser lives which compose us are in the process of coming apart and unraveling the greater entity.

A great life which once lived in Shamballa who has reversed himself, and yet has the knowing of a master, will have the power to deceive all but the very elect for he can duplicate all the wisdom, the power and even the concern for humanity a Master may appear to have.

The problem with humans discerning evil among the greater lives is that what is backwards in evolution for them appears far ahead for us. Their evil is our good. Take again the example of Hitler’s dog. The discipline that a Hitler will give his dog may be just what he needs for his progress. The dog cannot see the greater picture affecting the whole.

Because some greater reversed lives can appear good throws emphasis on our maintaining soul contact for it is only through bypassing authority with all life but the soul and spirit can we safely travel the path forward and not be deceived.

I will be touching on this subject from time to time.