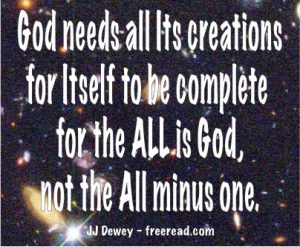 Let me continue with comments on our current topic by making a number of statements which I believe cannot be logically challenged.

(1) The people who have been posting creating some controversy are all good decent loving individuals. Some only seem unloving because their belief system causes them to dislike the actions of certain groups or individuals.

It is interesting that this idea extends even to individuals who belong to groups that few of us would give the time of day.

Let us take the extreme environmentalists on one hand, and the Aryan Nations on the other. Both are attached to belief systems which cause them to “hate the sins” of the groups they despise. For instance, the extreme environmentalists claim to hate the cutting down of trees, but they really care for and love the logger, deluded though he may be in their eyes. Even though they claim love for all, they are still willing to spike trees which can cause loggers injury or death. But it is worth it they reason for the “greater good.”

The Aryan Nations say they hate the idea of blacks sharing power, residence and marriage with whites. This belief is strong with them because they believe it comes from the Bible. Even so, most of them claim to have nothing against blacks and to love them as much as the next guy.

The point I am making is that most people who appear to hate, dislike or have prejudice against certain groups are as loving as you or I. The difference with them is they are attached to an idea, which, if followed, can lead to the appearance, or the reality, of separateness, rejection and sometimes harmful action.

But there is an important point here for the average seeker to digest and that is the point that all of us in this diverse group seek to love our fellow men and women as much as our ring-pass-not will allow.

Why is this knowledge important?

It is important because it puts the responsibility of our loving them upon us. We are not to first insist that they change, but we are to look upon their souls (which is free from separative beliefs) and see them as they really are – a good person with a few delusions like ourselves who will respond to love unfeigned.

Jesus said: “You love me because I loved you first.” We must always be like the Master and love first, last and always.

With rare exceptions those who are attracted to the opposite sex never made a choice in this life to feel this pull or inclination. They were born this way.

We must also give the same understanding to the gays. Again (with rare exceptions) they did not ask or chose to be attracted to their own sex – at least not in this life. This is a play of energies working out in their lives that they have to live with.

(3) Even though the natural sexual attraction we have is not a choice (within a lifetime) the actions that we make, as far as sexual behavior is concerned, is a choice. Each of us has power to choose what our actions will be.

(4) Each of us needs to be more concerned about our own spiritual growth than about the morality of our neighbor who causes us no harm.

(5) All of us whether gay or straight have misused or “perverted” sexual energy at one time or another. We could technically call anyone a “pervert” with some degree of accuracy. To some degree we are all in the same boat.

Note: You may be technically correct in calling your next door neighbor a pervert, but don’t be surprised if you find your cat dead on your doorstep the next day. It is wise to use language with your neighbor that you would want used on yourself.

(6) A gay can learn the right use of sexual energy just as a straight person can.

(7) A person born with gay inclinations is neither better or worse spiritually than a hetro. How he progresses spiritually depends on what he does, just as it does with the rest of us. You shall be judged by your works, said Jesus. Rev 2:23

(8) There are disadvantages to being gay. The main one is that about half the population see them as sinners first and people second. This causes them difficulties that straight people have difficulty in understanding. (Note: this situation has improved for gays since 2003 when this was written)

(9) As with all circumstances there are also benefits to being gay. Because their natural energies are closer to the zero point (see previous posts) than the hetro. It is easier for him to tap into his creative and spiritual energies than the straight person. This is especially true if he rightly directs or transmutes his sexual energy.

(10) The majority of gays are harmless loving individuals seeking to get along and be accepted just as the rest of us are.

These are ten statements which, if accepted, will help to synthesis these two divisions of humanity into a working whole. They do not ask you to accept any unacceptable behavior, but they do call for understanding.

“Before something can be loved it must first be understood” said Leonardo DaVinci. If gays and straights, fundamentalists and New Agers, liberals and conservatives understand each other then belief systems can be transcended and love can manifest.

Let it be so. Aumen

“When everything is coming your way, you’re in the wrong lane.” Steven Wright