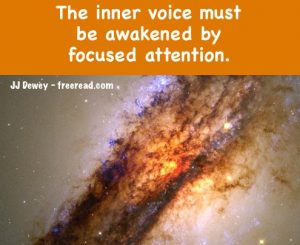 One of the things that developing my ability with emotional empathy really helped with was in my relationship with the opposite sex. I was kind of a nerd back in high school and had a hard time getting a date. But then when I came home from my mission and I had more sensitivity, when I approached a female about going on a date I could tell what she was feeling. If I could feel that she was feeling positive about me I could pursue her more aggressively. If it felt like there wasn’t a chance in hell I didn’t even try. I found that to be a benefit when I got home.

Audience: …When I ended whatever situation I was in I walked away from it quickly. They thought I was from outer space or something asking why would you walk away, why would you do this? That inner feeling was so tight and so gripping it was like, “Do it now or you will not live.” It’s been two or three times in my life. One time I know I probably would have been dead but the other two I question now. The feeling was so strong it was, “Leave, now.” One I thought was a serial killer. That’s what came to me. “He’s a serial killer and I must leave right now. Even though there were two of us together this man was a serial killer. Something said leave so I did. My friend thought I was crazy but that’s okay because I’m here. So there is a survival mode too that really grips you and makes you listen. I don’t know if anyone else might have experienced that, maybe in war times.

JJ: Thanks. I remember one time a group of about a half a dozen of us were going someplace in a van together. One of the group said, “I have a terrible feeling something bad is going to happen.” We asked what it was. “Maybe we’re going to have a wreck or something.” So I told the driver, “why don’t you just stop and we’ll sit here for a minute. If we were going to have a wreck that will change it and we won’t run into whoever we were going to run into.” Everybody thought that was a good idea so we stopped a minute then continued. We didn’t have a wreck and the guy felt better afterwards. Now whether anything would’ve happened, who knows but nothing did happen so everybody was happy.

JJ: Yeah, you hear that with plane crashes. Often times when a plane crashes there might be one person that had a feeling not to go, or came late, or something.

When I became emotionally telepathic I became really concerned and empathetic about people I was working with. It was then the sensitivity just began to increase. Now, a person can begin by working on people that are close to him–a spouse, brothers and sisters, family, people you’re working with. Try to develop the attitude of helpfulness, of empathy, trying to understand how they’re feeling, how they’re thinking. Go beyond the body language. And you may find, for instance, at work, you’re sitting at your desk, and you may pick up a feeling about somebody a couple of desks down. Maybe they’re having trouble, and you may find yourself picking it up. But you have to pay attention to it. One of the reasons this developed for me, at this time, was because I was paying a lot of attention. Just like my old dog. He developed close to extra-sensory perception. Unfortunately, he didn’t develop his extra-sensory perception good enough because he eventually got run over. Too bad he couldn’t tell the car was coming. But as we pay attention to these feelings, to the emotional vibrations about us, we can eventually tune into them.

The Akashic records, as many of us hear about–which is the Book of Life where everything is recorded–is often accessed fairly randomly. We may access one part, and then another part over here, and then another part in another sector. And then the person who has extra-sensory perception tries to put them all together. Some pieces of it are accurate and other pieces are not.

I’ve done a number of experiments. I’ve had psychic readings done to me by a number times. Some of them have been pretty accurate and some of them have not been accurate at all. So, it varies here. I can think of one that was very accurate but that would be a long story. Yeah, Rick?

[Rick] When my daughter, Rachel, was developing sensitivity over the last few years, she said, “Daddy, I get these impressions of things that are going to happen. But as soon as I tell people what’s going to happen it always turns out to be exactly the opposite.” I’d say, “Well, that’s part of developing the sensitivity. You have to understand that at often times, like, it is a mirror world when things are coming through. And you have to understand to turn it around in your head.”

JJ: Yes. And so it is important to remember the astral world is a mirror-image reflection. If you can learn to read backwards in a mirror – you can actually get some pretty accurate information. But when we look at words in a mirror image we have to turn things around backwards to see correctly. As a matter of fact, a lot of impressions people get will be the opposite of what will happen. And often times we will notice in our impressions that if we look in the opposite direction there’s maybe some truth there. And this is because of that mirror-image that we pick up.

Okay, what’s the next step up beyond this? Beyond picking up the feelings through the emotional nature?

Okay. Let me ask you this. What’s perhaps the most important telepathy we can have? It involves our relationship with, what? Right, it involves soul-contact. Contact with our own souls. Before you have contact with your own soul most people will be fairly emotionally sensitive first. They’ll pick up feelings from other people; people they’re close to. And we do this with varying degrees. Sometimes it may be fairly spectacular, and other times it maybe just really small things. That’s an important first step is to become empathetic toward other people and understand their feelings–sensitive enough so that you can go beyond the normal perception to be able to tell when they’re up or when they’re down, when they need help, and when they don’t need help.

Now, a lot of people suppress, emotionally. They’re difficult people to work with because you may feel that something’s wrong with them and when you ask them they’ll say, “Well, I’m just fine.” Because many people suppress their negative emotions and even pretend, in their own minds, the negativity does not exist. They are difficult to work with because they won’t even acknowledge that they need an emotional uplift.

So, this is important. And the second step, an important step, is to establish soul-contact. And this emotional communication is a form of soul-contact. When I talk about the soul I’m talking about the door–the doorway that we all have that is between us and the higher realms. I call this soul energy. The soul lies between spirit and matter. The interplay of spirit and matter is soul and it produces soul energy. And soul-contact is opening the door so we enter into that vibration between spirit and matter, and this is the key that unlocks all the higher worlds. So, when I speak of soul-contact I’m being all-embracive here referring to the one key to the infinite worlds.