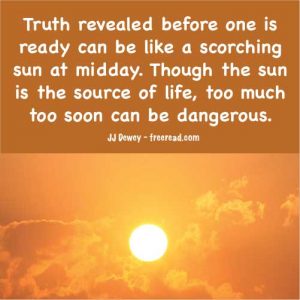 Question: “Are there any safeguards by our souls or the Masters on what seekers may receive. I feel I have been dangerously overloaded several times.”

A question for all really which follows some of my own recent experiences. The question is are there any safeguards for the amount of information that is revealed to an initiate or during enlightenment. Personally I found that I was overloaded with not only divine knowledge but also what was almost too much sensory perception and suddenly found myself participating in not only what was perceived by me as group telepathy, but also with my surroundings and colours. I felt that I was over-exposed and the onslaught led me to be hospitalized for a couple of weeks. So my question is where or what are the safeguards to enlightenment?

Many believe that safeguards on the path of enlightenment are unnecessary as all you are supposed to have to do is think positive, love others and all will be well. It is not that simple as all disciples find out at one time or another.

When we began our progression on the physical plane as human entities the soul placed many safeguards between our consciousness and the higher energies hidden within the pedals of the various centers within our bodies.

As we listen to the voice of the soul the energy pedals slowly unfold. If they unfold too quickly then, or if our consciousness is not prepared when they do unfold, then a disturbance is created which can produce disease or weakness.

You have heard the statement: “When the student is ready the teacher will appear.”

Why does the teacher have to wait until the student is ready?

Answer: Because if he were to stimulate energy centers in the student prematurely then he would hurt more than help the seeker.

Even if we do all we can to move ahead in our progression according to the will of the Spirit we will find times when new energy centers open that are very difficult in which to adjust. However, if the student accepts and deals with the energy then the adjustment will usually come within 6 months to two years.

The real danger comes when the student seeks the higher energies before he is prepared in consciousness to deal with them. The centers can be forced open prematurely through certain types of meditation, breathing exercises and even too much prayer directed toward self.

So what do you do if you are overloaded as our friend seems to be?

(1) If you do regular meditation, clearing the mind, seeking higher consciousness, visualization etc cease doing so until you feel the energy has normalized. This may take up to two years.

(2) If you pray fervently make your prayers short and preferably limit then to once a day.

(3) The idea of mixing with positive people is good. It is preferable that these people be playful and fun loving in spirit.

(4) Make the majority of your learning through contemplation, but not negative meditation.

Staying in this group and learning here should be safe as we stress contemplation instead of empty-the-mind type of meditation.

Let us know if any problems persists.

Question: “Talking about world, I came across this website about an unknown planet (12th planet, Nibiru) whose orbits nears Earth every 3600 years. The last time it happened was around 1600 B.C. The next time its going to happen is around May – June 2003, which is just around the corner! This rogue planet is 25X the size, and 100X the density of Earth. As Nibiru passes by Earth, the terrific gravitational pull will cause Earths poles to shift, causing tremendous earthquakes, volcanic eruptions, tidal waves etc. It seems the US govt is covering up the existence of this planet to prevent widespread panic & alarm.

I do not even believe that Planet X exists, at least not in the physical.

It is possible for planets to swing out of their orbit and visit each other, but I do not see this happening on earth in the immediate future.

Our most pressing concern is the weapons of mass destruction and the possibility that a rogue nation may soon use them. The danger is great now between India and Pakistan. Hopefully the forces of light will prevail and we can prevent such destruction until firm international law is in place to prohibit the manufacture of weapons that can destroy life on earth as we know it.