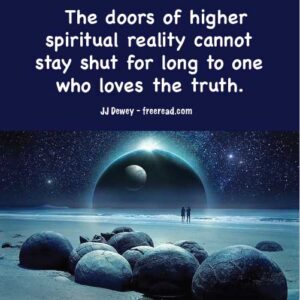 Just a few more comments of clarification on this statement: “In evolution the end is often like the beginning but with improvements.”

Studying ancient physical races will not shed much light on this because the first two races were not physical, but were in grades of etheric matter. It was the third race, the Lemurian, was physical, of which the Australian aborigine is a remnant.

The first race was hermaphrodite and has similarities to the seventh and last race, but with differences. One of the biggest differences is the seventh race will be physical.

“If the eye is all-seeing then the one will be all that is needed and would not be a regression.”

I received some questioning on my teaching that the seventh race will have need of only one eye which will be the eventual physical manifestation of the ajna center, commonly called the third eye. This eye will take the place of the current two physical eyes as well as enable vision in etheric and mental matter. What is called the Elohim use this eye.

It was questioned as to whether it is scientifically possible for one eye to replace the two on the physical plane.

There are many spiritual abilities for which current science cannot explain. It does not even accept the idea of spiritual worlds, or an afterlife. Many with near death experiences reported 360-degree vision and that they were able to see with their whole spiritual body, not just the eyes. There are many higher abilities of which we are capable that are beyond the understanding of current science, but when new discoveries are made science will have to yield to the new realities.

Reader comment: I can see it now. After we evolve into having one eye, we will also have one hand and just one foot to jump around on.

JJ: Instead of moving toward one arm and one leg the evolution is toward formlessness or circular cells of energy. It is obvious that in the present physical world one arm and one leg would be a handicap. One limb would also be a handicap in beauty as all things move toward the beautiful as well as the useful. One all-seeing eye would give all the usefulness needed. Because humanity has not seen such a being they cannot judge its beauty for it is nothing like the fairly grotesque forms of movie fame.

As in all things I teach all are free to accept or reject, but I will add this for the logical mind. Nature has experimented with all forms, probably even one-legged ones. It keeps the ones that works and discards the ones that do not work. If there is such a thing as an all-seeing eye that is also a thing of beauty then we would not need two of them. Therefore, logic dictates that this form would be kept by those who are attracted to it and find it useful.

Those of us who want to keep our present form indefinitely will be able to do so as long as physical reality is conducive to it. However, as soon as a new form comes along that is more useful all intelligence begins to gravitate toward it.

The next race, the sixth will not experience a great change in form but will be a synthesis of all races and the beauty of the individual will be refined. The change is more in consciousness than the physical form excepting that the majority will be beautiful.

The seventh race on this (and previous planets) will see a significant physical changes toward the divine hermaphrodite. This race, we are told, will be like Gods in comparison to the powers we have today.

As humanity on the various worlds advance more power will be given to the soul of the universe to give it life and shape.

Question: Would you clarify our relation to the Ancient of Days and our solar angel?

The elements of your body existed before you incarnated and will exist after you die. In fact they change every 7-14 years. We are like the elements in the body of the planetary logos.

Question: Does the Solar Angel and Ancient of Days work as one or as two separate entities?

JJ: They are separate and in different planes. The Ancient of Days is much higher evolved than a solar angel.

Question: Is the monad part of the Ancient of Days’ consciousness, because here it is the God of this Earth?

JJ: The monad is the part of ourselves which dwells in the highest spiritual plane and has extended itself to experience time and space. Even the Ancient of Days has a monad, but it doesn’t directly experience life here. Higher lives such as the Ancient of Days access the consciousness of the monad and go where none has gone before in this physical universe.

The more original a discovery, the more obvious it seems afterwards. Arthur Koestler (1905 – 1983)