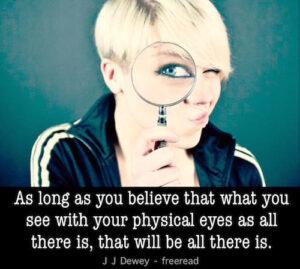 Question: If we evolved to having just a single eye then how would we perceive 3-dimensional space for which two eyes are needed?

JJ: The all-seeing eye would be able to perceive three-dimensional space and more. To say it could not would be like someone in 1980 saying that computers cannot perceive speech. The seeing of our current eyes is primitive compared to where we are going.

In fact, I can see 3-dimensional space and distance with one eye closed all ready.

We can’t judge the qualities and abilities of the all-seeing eye by comparing them to our own limited ones because it is a much more advanced model.

Question: It is interesting that you say the Ancient of Days was the first self-conscious human? So, he was a human being once just like we are now.

JJ: When he incarnated as the first self-conscious human on the earth he had already overcome all things as a mortal in another solar system in the distant past and was far more than a master.

He made a great sacrifice and incarnated to stimulate the evolution of the humanoids toward self-consciousness.

Question: The Ancient of Days is now so advanced that he is that molecular life-form which is incarnated into a body composed of all earth life. Will we humans one day be that higher molecular life-form that incarnates into the 24 bodies of future molecules? Is that the direction our evolution is headed?

When a molecule is perfected, another entity will incarnate in it and we will share its consciousness, but will still be distinct from the higher entities in Shamballa.

The reader then went on to explain, how in accordance with current science and his own experience why we need two eyes for depth of vision as well as for a competed beautiful physical body.

JJ: Why are you assuming that evolution cannot create one eye that can do the work of two or be better than two? That is like a person a century ago saying that a telephone was impossible. It is also possible that our minds will evolve so we will not need arms and legs except for the need to manifest in an acceptable manner.

We know from many testimonies of near-death experience, as well as visions and spiritual experiences, that there is greater vision available than is had by our two physical eyes.  Many have reported being able to see in all directions when the body’s eyes were closed, as well as seeing from any part of their physical form. I recently read of a man who was blind from birth who had a near death experience and was able to see in all directions at once. He was able to see beyond the physical, and in so doing was also able to see what was happening in the physical world.

The third eye also has this capability of seeing beyond the physical, and when this occurs the physical is also available to vision, but a vision greater than possessed by the two physical eyes.

But the beauty of the eye transcends symmetry and beauty is found in the eye itself that goes beyond beauty as found in form. The radiation from the eye creates a spiritual beauty, but even from the physical perspective it is very regal.

Even with our present forms there is beauty in the eyes that goes far beyond symmetry. Some eyes are so lovely you could just stare at them for a long period even though a rough description may make them sound no different than the eyes of Hitler.

Because there is only one of a thing is no reason to not see beauty. We have one mouth, one nose and one face and most find beauty in these.

The third all-seeing eye will be a new organ that will take over the function of our two eyes and add new dimensions of seeing causing the regular form to eventually change.

I’m not saying now or ever that any new development in evolution or ability will ever run contrary to any of the laws of physics or the universe. All the higher lives merely use the laws we know and some we do not know to remove limitations.

The all-seeing eye uses natural law to see in the physical and also higher planes as well as wavelengths not available to the normal human, It can not only see through physical objects but around them and thus has a depth perception much greater than the two eyes, making two eyes unnecessary.

The all-permeating light of the spirit is everywhere making universal vision possible.

Do not follow where the path may lead. Go instead where there is no path and leave a trail. — Harold R. McAlindon