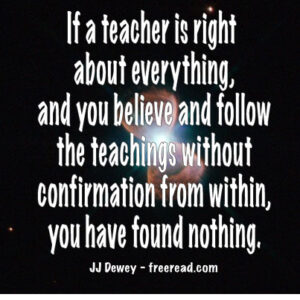 I have been thinking about a subject that needs a little clarification.

Over the years many supporters and like-thinking members have defending me and the teachings I have given out in a number of ways, not only in this group, but on numerous other forums and circumstances. Some have gone so far as to say something like: “This is what I think JJ thinks on the matter.” Usually, they are amazingly accurate when they do this.

What has saddened me is that these sincere individuals have often been attacked with the implication that they have no thoughts of their own, that they are JJ clones or non-thinking robots.

So the question to consider is this: Are such people no different than the unthinking members of a cult or a highly structured religion or movement?

To answer this, we must understand there are three types of people who support a teaching or ideal.

[1] Those who are indoctrinated by a system and then threatened with punishment for thinking outside the box.

A believing member of an authoritative religion is a typical example of this. He understands the basic precepts and supports them. Anything that extends beyond the basics is scary to him and going into the mysteries or speaking contrary to orthodox doctrine puts him in danger of hell fire.

[2] Those who accept basic teachings or ideals, but are a law unto themselves and accept no apparent outside authority except that which suits their beliefs. These rely on their mindset only to interpret doctrine and if they are closely examined, we will find that no two think alike.

You can see this category of individuals at play in many discussion groups on the web. Within these groups you’ll see many individuals advancing their particular philosophy from the mental plane. Others of this group will sometimes agree with them and other times strongly disagree, but never will any two see completely eye to eye.

[3] The third group will consist of those who have obtained a degree of soul contact. This is the group prophesied by Isaiah: “They shall see eye to eye when the Lord shall bring again Zion.”

Isaiah was speaking of the center between the eyebrows, the third eye, which perceives the intuitive level through the soul.

When two people perceive through this ajna center they will perceive the same principles and see the same vision.

Now here is the problem of discernment from the viewpoint of the outside observer:

To them there are only two categories. They see groups one and three as the same and group two as the only ones thinking for themselves.

In truth there are many differences between groups one and three. Can you name them?

Another reader listed key words associated with the two groups. Group one is listed first and group three second.

The last one is particularly good, for the unthinking followers know only the teachings of the past. When a new enlightened teaching surfaces they are afraid to even consider it.

If I were pressed to give a core difference it would be that group three is sensitive to the inner voice and is trusting of it and group one relies on outward authority.

The interesting point of this whole subject is that we see there are many differences between these two groups yet many people cannot see them and will lump them both in the same category. This is just because such people are too lazy to investigate beyond surface seeing and they do not see beyond their own outer authorities that govern their lives.

A person has to break free of outer authority and have some sensitivity to the soul before he can recognize a member of group three. He cannot see that which he cannot understand, but there are many who are capable of understanding, but who are just too stubborn to see.

Conclusion: Unity of thought and visions between two or more people is not always evidence of brainwashing or mind control, but among the enlightened it is because of soul contact causing the members of the group to see eye to eye in areas where they look the same direction.

If antidepressant drugs are effective, why don’t they work for psychiatrists? Year after year, psychiatrists commit suicide at a higher rate than the general population. Are we to believe that they don’t take their own drugs, or that the drugs don’t have the benefits attributed to them? Nicolas Martin, American Iatrogenic Association website