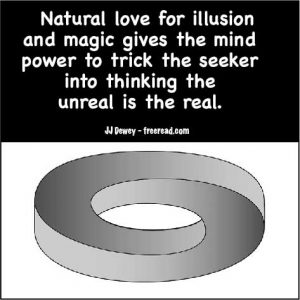 We’ve gotten several questions to catch up on. First: The path to the intuition is forged on the plane of the mind. It is said that the main obstacle that prevents the mind from finding intuition is that the mind “slays the real.” Question: What is the meaning of this phrase and how is this obstacle overcome?

Someone indicated that perhaps the phrase “the mind slays the real” is not exactly literal. This is perhaps true as the real cannot be slain. The mind can, however, disregard the real and prevent, for a time, its coming into the consciousness of the seeker.

The destiny of the mind is to receive the real by reflecting the light of the soul to our lower nature, but until it is forced by decision to receive this light, it will guide the entity on the path of illusion, as if the real does not exist.

It thus may be more literally correct to say that the mind ignores, distorts or denies the real. Even so, to the observer the process does have the appearance of the truth being slain.

The most common example of the mind slaying the real is found in the entity who is going through the stage of atheism. The subject’s mind has looked far and wide for God and has not found him. Since he cannot see or demonstrate the existence of God he rejects Him/Her/It.

Now keep in mind that most atheists are fairly advanced entities going through a discovery stage and final development of the mind before developing the intuition. This means that many atheists are further along the Path than a large number of believers, especially believers who do not have highly developed minds.

The mind of the atheist therefore “slays” the reality of God or higher intelligence. He can thus remain comfortable for a series of lives with this denial (as well as others) until mind is forced to admit to itself that it does not have all the answers. He will go through numerous occurrences where intense pain is the result, and without God in the equation logic does not seem to provide a satisfactory explanation. As he evolves he encounters more and more dead ends until he begins to be so frustrated he looks to the heavens and shouts one of the following:

“There must be more to life than this!”

“There must be an answer to this!”

As he shouts out his frustration his soul listens and responds.

“The wait of the ages has come to an end,” says the soul. “It is time for communion.”

The soul then sends down higher principles and revelation to the seeker that previously have not been available to him.

Slowly at first, he notices, and finally the higher knowledge is so clear that the entity has to admit to himself that there is some higher power up or out there somewhere. He therefore brings back into his mind the belief in God, but this time it is real to him for the knowledge of higher intelligence is now absolute fact to his mind.

There are many more examples of the mind slaying the real. We have named only one. Others are:

The reality of life after death

The reality of invisible worlds and beings

The reality of telepathy

The reality of the Masters

The reality that life is in all things.

The reality of life on other worlds etc.

The Question: Why do we see the sun as yellow when it is really blue?

Readers have taken two lines of approach in the answer here.

The first idea is that the yellow we see as the color of the sun only represents the outer shell and the inner part of the sun is blue.

The second idea is that in this world we see many things as upside down from the true reality. Therefore, the colors we see are not the real colors but opposing colors on the opposite end of the spectrum.

These are both intelligent guesses and since DK did not explain why we do not see the correct color of the Sun, there may indeed be truth in these two conclusions.

Now let me add my thoughts.

First, let me clarify the correct color as mentioned by DK. In some places he says the sun is blue and others indigo. One may wonder if he is consistent here until you discover a clarification where he more fully describes the color as a dark blue, which may also be called indigo.

The Key to understanding here is that our Sun is a part of a greater body of seven solar systems. Each of these seven Suns represents one of the seven Rays. Our sun vibrates to the Second Ray of Love Wisdom and the color of this ray is indigo, or dark blue. DK tells us that the “Solar Logos is spoken of as the Blue Logos (literally indigo), so the colour of the perfected man, and of the auric envelope through which he manifests, will be predominantly blue.” Letters on Occult Meditation, Page 207

To see the true color of the sun one would have to look through the eyes of the Logos who is over the seven solar systems seeing with all the seven solar rays merged and blended.

To understand why our color vision is distorted one could put on dark blue sunglasses and look at the surrounding world. Every color now looks much differently than it does without sunglasses.

This is what happens to the inhabitants of this solar system because it is built upon Ray Two of dark blue/indigo. We thus see through a glass darkly (as someone noted). As the disciple becomes one with the soul and the spirit/monad the dark glass begins to clarify and color becomes brighter and more true.

Commander Lock: Not everyone believes what you do Morpheus.

Morpheus: My beliefs do not require them to. Matrix Reloaded