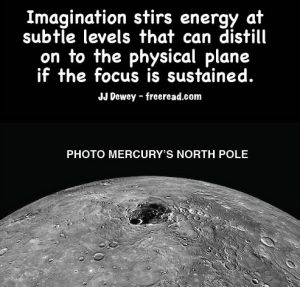 The Question: What is the difference between seeing light as separate from ourselves and becoming light and seeing with that light?

First I’ll note that a reader is correct in saying the true light is not separate from ourselves and I did not mean to imply that it is. It is technically true that we do not become light if the light is already a part of ourselves. But to the vision of the lower self it does seem that the true light is a separate thing that we reach out for. In a sense we eventually become one with a light that is already one with us. Yet, since our consciousness is separated from the true light there is indeed a real separation of sorts. What else is there but consciousness and if consciousness sees itself as separate from a thing then this separation seems very real.

The main difference between the true light and the shadow light is the latter is not seen. Only effects of contrast and shadows are seen. When one realizes a oneness with the true light he is no longer dependent upon shadows for vision. Instead he becomes the light of the world and embraces the world with light. In doing so he sees with this embracing light, but in seeing he sees much more than shadow objects. Instead of seeing in the “land of distances,” he sees from the point of unity.

What does he see that is beyond the vision of the normal eyes?

Question: Sometimes, when I relax and close my eyes, and get into a certain meditative state, I see things very vividly, but it’s like looking at a black and white photograph. There are only two colors, but the colors and pink and blue. I was wondering if there was any significance to seeing things in only these two colors.

JJ: This would indicate that your consciousness focuses on these two colors and the meaning behind them almost to the exclusion of the other colors. Pink and blue is an odd combination. Pink is the color of romantic or emotionally sensitive love and feeling; whereas blue represents mind, thought, logic etc. You are a thinker who is logical, but place equal attention on your sensitive side. I would say the fact that the other colors are lacking is a message to also place attention on other parts of your nature. I cannot tell you where to start. You must sense it and follow your soul.

The group is stretching is attempting to comprehend what could be above the intuitive plane, but this is a good thing. It is important that all of us realize we have a long way to go.

There is none more pitied by the Gods than the large ego who sees himself as at the end of his evolution when, in reality, he is a mere babe in the woods.

Here are a couple more seed thoughts to ponder in understanding the atmic plane.

Contemplate this plane from the principle of the Law of Correspondences.

Consider that creation is closely linked to the mental and the physical planes. How then would the atmic be linked to creation in even a higher principle than is the mental plane?

The group did stretch their minds on this question. Now to make us stretch a bit more let me give some additional seed thoughts about this plane, which even DK says he has difficulty putting the concept of it into words.

Intuition brings down these ideas, but atmic consciousness originates them.

DK uses what he admits are inadequate words describing this consciousness. They are “realization,” “magnetized consciousness,” and “identification.”

What do these three statements tell you about this higher consciousness and what do they have in common?

Atmic consciousness is the highest point of the Spiritual Triad. Perhaps some industrious member can give us some of DK’s teachings on this.

There seems to be some confusion over what soul contact is after I made the statement that soul energy is projected down to all living forms in this material world.

The confusion occurs because DK talks about a lower aspect of soul energy which exists in all matter and builds all forms. Soul energy is also reflected down into the lower self and is the channel through which it is vitalized. From this viewpoint, of all of us being touched by this aspect of soul energy one could say that all have soul contact.

However, this is not what DK refers to when he talks specifically of the term “soul contact.” When he teaches of this he is talking of consciously opening the door of soul and obtaining the sensitivity to contact the solar angel. This is not something that all do, but only those who sincerely aspire to the spiritual path.

We had an odd experience on the way home from the gathering. On Tuesday evening after leaving Nauvoo we arrived in Sioux Falls, South Dakota. We noticed gathering storms so we turned on the radio and heard something like this.

“A tornado has just completely destroyed the town of Manchester and several other nearby towns are experiencing 70 mile an hour winds, thunderstorms, hail the size of golf balls and torrents of rain. Warning! A storm is approaching Sioux Falls within fifteen minutes that may develop into a tornado. This is a life or death situation. FIND SHELTER NOW!!! I have seen nothing like this since I have lived here. This storm is coming from several directions at once and it is difficult to predict what will happen.”

After hearing this we were quite perplexed. Artie wanted to find a motel room for shelter, but I told her that a motel may not be much protection from a tornado. I suggested that we follow our original plan and head west toward Rapid City and get ahead of the storm. She was nervous about this but we headed out anyway hoping to outrun the storm. We kept listening to the radio as we entered the highway heading west.

The announcer then said his station was going on emergency power and then named several towns in the direction we were headed that also had storm warnings. He said storms seemed to be developing from numerous locations. Then he kept repeating “find shelter now! This is a life or death situation!”

We were then faced with a decision to head into the storm going west or go back to Sioux Falls and face a possible tornado. I had the feeling to forge ahead and go west, but Artie insisted we go back to Sioux Falls and find some shelter. I reluctantly turned around and headed back to the city. After taking an exit we seemed to wind up in some industrial area that took us about twenty minutes to get out of. Shortly after this the announcer said that the tornado danger for the city would be about another hour. We finally decided the best thing to do was park the car off road under a concrete overpass and wait it out.

As we waited we watched the sky light up again and again with spectacular lightening from the thunderstorm. The radio gave reports of flooding in parts of the city, but fortunately no tornado materialized.

After the worst seemed to be over I insisted that we again head west and we took off a second time. On the way out of town we encountered two large semis blown off the road as well as some cars. For about the next three hours we drove through wind and rain and thunderstorms. Every few minutes lightening would light up the whole sky. This continued to be the case for the next two hundred miles. I had never seen a thunderstorm last so long and cover such a distance. It almost seemed as if fire from the sky was following us wherever we went. It made me think to myself that maybe we did too good of a job in calling down the spiritual fire, that it was manifesting on a physical level.

Anyway about four in the morning we finally pulled into Rapid City and spent a peaceful time the next day seeing Mount Rushmore. Thank goodness the rest of the journey home was quite normal.