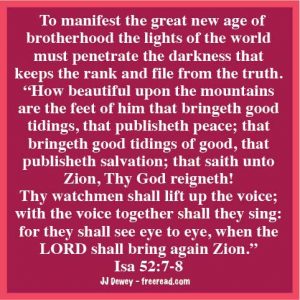 Reality and the New Age

Various schools of thought disagree with each other on energy and the centers. A lot of the differentiations are caused by illusionary vision. Just because someone claims to see with some supernormal vision does not mean that he either sees accurately or interprets accurately.

For one thing to see into the aura or etheric matter of another you must first look through your own. What sometimes happens is that the seer will see colors or symbols within his own aura when thinking he is seeing effects in the aura of another.

If one is centered in the solar plexus he will have to filter his seeing through a rosy red with a touch of green. In addition to this he will have to see through colors within his aura. Beyond this he is could be seeing symbols in the outer film of his aura.

Often times several people together will see a similar illusion because of their similarity in vibration and expectant outcome.

The best source of learning about the centers is from an actual Master in connection with your own soul confirmation. This is why I would recommend learning from the writings of Alice A. Bailey which contains teachings of a Master, or one who has mastered these illusions.

Question: How can we know whether or not the teachings of the centers is true? So I throw this out to the group.

How can we know that this teaching is just not a fabrication?

This is a good opportunity for us to apply the Principles of Discovery that we so thoroughly covered. Especially applicable are the Law of Correspondences. Other discovery principles we have covered I am sure could be helpful.

Indeed there are other ways of knowing besides psychic vision and different people are given different gifts. In the end though each of us must follow that which registers with “the highest we know.” Ideally that would be through soul contact, for if we are true to the highest within ourselves the soul will eventually manifest.

Question: What do I mean by the term “New Age?”

It’s pretty simple. We are moving from the Age of Pisces into the Age of Aquarius. We will be securely into this coming new age in about 150 years and most expect this to be an enlightened age of brotherhood and peace as well as human advancement. Right now we are in the transition phase and the division between the old age and new age thinking is coming into greater contrast.

The Question: How then has female energy been strong in manifestation during the past 2000+ years?

The new age we are entering, on the other hand, is seen as being one of more equality between the sexes, giving the female more power which she deserves. How can this be when the ages are shifting from female to male in polarity? How will male energy manifest in the coming age as opposed to the strong female energy in the past age?

We received some great comments on this question. One spoke correctly when she pointed out that Pisces, the most female charged age, which followed Aries the strongest in male polarization. This indeed did cause a carryover of male dominance amid the strong female emotional energy of Pisces.

Another important point is that the path of involution is dominated by female energy whereas the path of evolution is dominated by male. The female is the stimulator of the male in the fact that she leads all life into experience making Eternal Becoming possible. The male is the savior of the female in the fact that when the problems of the world of experience become manifest, he will lead the female out of matter back into the world of Spirit.

The days of Atlantis marked the beginning of the shift of a long cycle from female to male polarization which was consummated with the first coming of Christ.

Christ represented the ideal male who is to lead us to Spirit. Unfortunately the age of Pisces gave us many males who gave us terrible examples of what the ideal male was supposed to present, but the example of Christ lives on and during the coming age of Aquarius, which has a slight male charge, the male will be more in his energy and be able to set a better example of his destiny. This in turn will give the female fewer restrictions and more freedom to master her own destiny.

Pisces was dominated by water which is a symbol of emotion and the Sixth Ray which produces idealism which sometimes leads to fanaticism. A casual reading of the history of the past two thousand years does indeed reveal a very highly emotional era. The Crusades, the emotional rule of the “mother” church, the emotional burning of witches and heretics, the persecution of the saints and scientists… All of these and more are caused by blind emotion obscuring the reasoning of mind.

Pisces is also on the mutable cross which causes a “go with the flow” attitude as far as energy goes. The funny thing is that we often hear this phrase from new age people, not realizing that this is the mantra of the passing age and not the Aquarian Age.

Thus the energy of the mutable cross caused the people of the last two thousand years to go with their feelings with very little thought involved.

The Aquarian Age switches from water to air. Air is the symbol of mind. The beginnings of this age were manifest at the writing of the Constitution of the United States. We are now about half way into the full manifestation of the New Age.

It is interesting to note that on the Great Seal of the United States is written:

Novus Ordo Seclorum which is translated as

“New order of the Ages.”

Government of the people, by the people and for the people is definitely one of the keynotes of the new age.

The power of mind (air) has given us all the great scientific advances we have made, especially in the past 100 years. This is also due to the influence of Uranus which stimulates discovery.

Uranus is also governed by the Seventh Ray which stimulates order through law.

It is interesting to note that many who see themselves as enlightened are often disrespectful of law, but just law will bring the order necessary to the nations to insure that a peaceable brotherhood can be established.

The Seventh Ray also governs business, and as we discussed earlier, the business world will play a large role in manifesting the most wonderful age in recorded history.

Aquarius is also on the Fixed Cross which produces an influence much different than the Mutable of Pisces. The “go with the flow” idea will fade out and be replaced with a more adventurous attitude of going against the flow, or “bucking the system” of unjust authority – the path of high resistance as we discussed earlier.