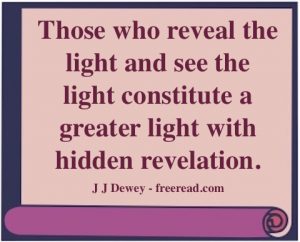 What will happen in the fifth initiation is a disciple will have proven himself and that he is willing to do what is necessary to accomplish the work. He’s dispelled illusion and he has proven also he will do whatever is necessary to get the job done, no matter what it is, even sacrificing everything that he has. The fourth and fifth are very closely linked because the fifth follows the fourth very closely during which the disciple will receive a revelation.

It was a completion of Buddha to give out his revelations. Now Buddha could have probably extended his life, but he ended it as a normal life. Of Moses it is said, nobody knew where his body was buried. At 120 years old, Moses still had the stamina of a twenty year old young man. It says in the Bible his natural force was not abated. Most Bible scholars think it means that he still had sex. So his natural force was not abated meaning he still had all his natural vitality and energy. One day Moses just disappeared and nobody knew what happened to him. A lot of people think he was translated or had his life extended or later died, they don’t know. There’s lot of legends around what happened to him.

Audience: Why do you suppose that revelation would come after sacrifice because sacrifice is a so much more difficult task?

JJ: Well, because he’s trusted with it afterwards. The Higher Self isn’t going to give you a revelation for the whole world unless you’re willing to sacrifice your lower self to give it to the whole world. There are a lot of crazy people out there with a Messiah complex that think they have a revelation for the whole world. If you listen to these guys they just babble a whole lot of things that don’t make sense. Obviously it isn’t a revelation to the world, but they think it is. They think it is really important. For every person working on the 5th degree initiation there are many false Messiahs, or false disciples out there. So that’s the reason that after a person has proven himself to do whatever is necessary, then he is given an important job to do.

Audience: It appears to me that Joseph Smith has inverted the situation. He received revelation before the fifth initiation.

Joseph Smith who anticipated that he should pass his fourth because it’s possible he passed his fourth in a previous lifetime. I believe he slipped up in his lifetime. One of the reasons the church is not fulfilling its spiritual destiny now is because he didn’t pass his fourth initiation. If he would have passed it he could have set it on a course that would have made the Mormon Church a lot more spiritual than it is today. Instead it is more pious than spiritual.

Audience: Did you say the Buddha had to come back to do the sixth & seventh level? It is okay to die after the fifth level?

JJ: Yes. The Buddha reached as high as the sixth initiation. We’ll talk about that next, matter of fact.

Audience: What level of initiation was Mohammed? He brought a lot of revelation.

JJ: He was at least a third but because of the quality of his revelation, I don’t believe he was a fourth. DK said the Master Jesus was a fifth degree initiate at the time, and he worked through Mohammed and helped him write the revelations. The Master Jesus gave the Koran to Mohammed, and it’s ironical when you think about it. Many in Islam think their religion is superior to Christianity yet Jesus is the one who inspired it. It’s kind of funny when you think about it.

The relationship was a little like Alice Bailey and Djwhal Khul except that the people Mohammed had to work with were kind of a primitive, tribal type thinking people, so it had to be adjusted to their thinking ability. That’s why there is a lot of fire and brimstone in the Koran.

“If you don’t do this, you are going to burn in the fire,” says the Koran. It’s in there quite often. A lot of fire and brimstone and the purpose of a lot of fire and brimstone is that it’s something the people can understand. Plus the promise of the seventy virgins type of thing and the promise of, if you’ll obey Allah, you’ll live in a paradise. They lived in a desert and the paradise that was described to them was always streams and running water, and greenery and flowers. It was a paradise to someone who was living in a desert land. This paradise was always put before their eyes if they behaved themselves.

Many people look at the Koran and think it’s kind of outrageous because it’s so full of fire and brimstone and doesn’t seem very enlightened. Yet, it was adjusted for the consciousness of those people. When you look at it from that aspect, it pulled the people ahead as far as their consciousness would allow them to be. It gave them a system of religious thought, a system of order. For the first few hundred years of Islam it was the most enlightened religion on earth. It was the center of learning and many Christians traveled to the Middle East to learn from their great libraries. It kind of fell apart after they went on some of their conquests. They started concentrating more on conquest than spirituality.

Question: How do you know that Jesus taught Mohammad? Where could this information be found?

JJ: DK taught this. Here is the quote: “the Mahommedan faith will be found to be linked to the Christian faith because it embodies the work of the Master Jesus as He overshadowed one of His senior disciples, a very advanced initiate, Mahomet.” Rays and Initiations, Page 254

“When the communication between the soul and its instrument is conscious and steady, the man becomes a white magician.” DK, Treatise on White Magic, Page 57