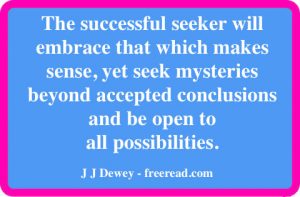 The sixth initiation is called the initiation of decision. As he approaches this level, the disciple becomes a Master of Wisdom and receives a revelation. During the fifth initiation he incorporates a revelation for humanity through the various disciples he works through. He who is working on the sixth initiation was one that was successful and basically incorporated the revelation in a pure enough state that he was able to move to his next step. The Christ in the Garden of Gethsemane also moved out of his sixth and began his seventh.

At the sixth initiation you have seven paths to choose from. I can’t remember them all.

Audience: So both Buddha and Christ are on the Earth Service Path right now?

JJ: Yes, right now. Christ will come back among us i9n some form again in the near future. How he will come is not given out exactly or exactly when. After he completes his seventh initiation he will tread the Path of Sirius also,

Audience: The Master Jesus will come again, too, to complete his fifth initiation by appearing to the Jewish people?

Audience: Jesus has incarnated as the Pope. It didn’t last very long, but he has. Where did you get that? What Pope?

JJ: Pope John Paul the First who was only in office thirty-three days before he was killed. What I believe happened there is from DK who said right around the time Pope John Paul I came into office The Master Jesus would attempt to take over the Catholic Church from the Vatican. What happened, is, I believe, Jesus overshadowed John Paul First. John Paul the First was not Jesus but Jesus worked through him. John Paul the First came to the Vatican and he was going to fire everybody and completely rearrange the Vatican. He saw the corruption there and he was making big changes. There is a book written about him that gives tremendous evidence that he was poisoned. It was called “In God’s Name” by David A. Yallop. He was only in office thirty-three days!

Audience: What century was this?

JJ: 1980, Pope John Paul the First was in office for thirty-three days and then mysteriously died.

Audience: He failed then?

Audience: I was heart broken when he died.

JJ: So was I and I’ve never been a Catholic. He was the only Catholic Pope for whom I cared. I just had a feeling that great things were going to happen. It didn’t dawn on me for a long time later, until recently, what really happened.

Audience: How could Jesus not tell Pope John Paul the First that this was going to be poisoned, don’t drink it? Because there wasn’t time?

JJ: Well, it depends on how closely John Paul was listening at the time, I guess. You know maybe he did receive a warning. The person in the body is the one who makes a decision related to the body. There were times in my life where I received a warning about something and I thought, “this will be really awkward to obey this warning” and I found out the warning was correct. Maybe he did receive a warning and just ignored it.

Audience: A question was raised about Apollonius of Tyana

JJ: This is where DK says something that is really quite mysterious. He says Jesus had his fifth initiation as Apollonius of Tyana. You’re thinking of Jesus when he was younger, that was when he fulfilled his earlier initiations. The mysterious thing about Apollonius and many students of DK are perplexed by this, is that Apollonius was said to be born the same time that Jesus was, right around 0 AD and he lived to be 100 years old though not all scholars agree on this. He was a very mysterious person. They put him in prison and he escaped; he teleported himself from one place to another and performed miracles. He was more famous than The Christ, for the first 400 years after his birth. There were statues of him all over the Middle East. After Constantine took over the Church, he tried to eliminate all reference to Apollonius so that the Messiah wouldn’t have any competition. They burned everything they could find that was written about Apollonius.

Audience: How was Jesus not Melchizedek but Joshua and Apollonius?

JJ: That’s a question that could be answered in several different ways. DK doesn’t explain it. He could have overshadowed Apollonius. Another theory presented by Madame Blavatsky is that The Christ was actually born 100 BC. According to this idea much of the history was actually fabricated, changed, or altered to make it look like Jesus was born around 4 BC or so. I haven’t got a personal revelation on the actual truth of the matter. I’m still contemplating it. Before you get revelation on things you have to get all the details. I’ve still got a book on Apollonius that I haven’t read all the way through.

JJ: Here’s another theory that Jesus was called Apollonius in his younger years, dwelled in Jerusalem for three years, was crucified and then took his resurrected body and lived to be the age of one hundred and disappeared out of sight.

Audience: Came to America for awhile, too.

Audience: Then to India and as Apollonius in Egypt. That’s the story and I’m stickin’ to it.

Audience: * Syria, DK, or something

JJ: Yeah, DK says that in the 1920’s that Jesus was in a physical body in Egypt, but he doesn’t say who he was. Yes, Jesus, the Master Jesus. He gets around a lot.

Audience: What about the Christ? The Christ completes his fifth initiation by linking Shamballa to us in this world. What did he do for his sixth? Is he working on his seventh now?

JJ: DK doesn’t give a lot of details about the sixth, other than it is an initiation of decision; where you make a decision for one of the seven paths that you pick. The Christ is, apparently for now, on the path of Earth Service.

“It is perhaps well to remember that the stage of discipleship is in many ways the most difficult part of the entire ladder of evolution.” DK, A Treatise on White Magic, Page 61