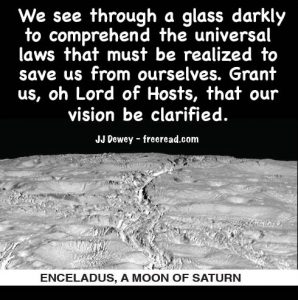 Nauvoo Gathering, 2003, Part 13
Mastery over the Lower Self

Jesus was an example of somebody who passed the fourth initiation. Jesus was in the Garden of Gethsemane where there were two entities in one body: there was Jesus, the reincarnation of Joshua, the other was The Christ who was the same as Melchizedek. At the Baptism of Jesus, the entity who was the Christ entered into the body of Jesus and there were two entities in the body of Jesus at one time. This is why Jesus kept saying, “the one that does the miracles is not me. Of myself I can do nothing. It’s the one that is in me, he’s the one that is doing the works.”

At the baptism, when the Christ came into Jesus, Jesus thought to himself, “I can finally build the kingdom of God on the earth. Here the Christ entity is in me and gives me the power to do all these wonderful works. This is going to give me the power to build the kingdom of God on earth that the prophets of God have prophesied all these years. I’m going to have the wonderful opportunity.”

Then what happens, near the end, the Christ within him says, “there is only one little problem about building the kingdom. It’s not time to build it yet. You have to be crucified.” “What? How are we going to build the kingdom if I have to go through a crucifixion?” “Well, that’s just the way it is, its part of the plan.” Jesus, who was not nearly as evolved as the Christ, had to struggle with that. In the Garden of Gethsemane we had Jesus, The Master, struggling with giving himself up to be crucified. He endured the fourth initiation and The Christ underwent the sixth initiation in The Garden as he faced the dweller on the threshold for the entire planet.

We had two entities undergoing two different initiations at the same time in the Garden of Gethsemane. We’d have a hard time identifying with the sixth initiation taken by the Christ. It is easier to understand the sacrifice of Jesus. We can understand a person that lived his whole life dreaming one thing. He dreamed his whole life of building the kingdom of God on the earth. If you spend your whole life dreaming of something and then are told you can’t do it and you have the agency to refuse, that decision is extremely hard.

It’s like Abraham, his whole life he dreamed of having a child that would be the seed that would produce offspring, as many as the stars of heaven, and would worship the One God. He had that dream. He had that his whole life. At the end of his life he had to give that up. It was an illusion that he was giving that up, but it looked like he was doing it. To Jesus, it looked like he was giving up building the kingdom of God, yet by cooperating and making the sacrifice, He established the Kingdom of God more firmly on earth than He ever could have if He built something physical, or restored some Jewish type kingdom.

Audience: He knew at the time He was going to have to give up his life. He told his disciples that. Yet He struggled with it again.

JJ: Well, The Christ knew He’d have to give up his life. But Jesus himself had a hard time accepting it totally. See, He thought with all this power He had, surely the plan would be to build the physical kingdom of God.

Audience: When he told his disciples, he agreed to give up his life…?

JJ: See, that was near the end of his life. He said, “Father if there be a way, let this cup pass from me.” From the strain he was under he bled from the pores of his skin, he was under that much strain. That’s how tough it was. Jesus did not want to give up the opportunity. He had worked his whole life for this and the opportunity was here, the powers of The Christ were with him. It looked like he could do something wonderful and he had to be crucified. To him, that didn’t seem like that would accomplish nearly as much good, as it would to go out and teach people. Teach them how to have soul contact, build the kingdom of God, establish the molecular relationship and all these great things. But to be crucified, that just didn’t feel like it would accomplish much. He may go down in history as a martyr, but that’s about it. That’s how he looked at it. It is interesting that Jesus was commanded to give his life.

Joseph Smith was commanded to save his life and this was more difficult in his circumstances than giving his life. Joseph Smith had a terrible time reconciling to saving himself. The fourth initiation is centered around a person’s values and the fourth degree initiate will have one shot at it in his lifetime because his whole life will be built around that point of tension. There’s no second chance in a lifetime; he’d have to come back again in another lifetime to be able to pass the fourth initiation. If Jesus would have failed or if Abraham would have failed, there wouldn’t have been another chance in that lifetime. They would have had to come back. For the fourth initiation, the circumstances of the whole life are geared to a certain moment in that life when the fourth initiation is taken. It takes a complex setup to create a situation where it looks like you’re sacrificing every possible thing that you can sacrifice, as if God Himself may be a liar, may be an enemy, because nothing is as it seems, as if you will lose everything that you could possibly hold dear to yourself. Giving your life alone may seem easy compared to it.

Even though we don’t know all the details, I believe Abraham Lincoln was a fourth degree initiate. I won’t go into it but there are several hints in his life about a time when he went through experiences that indicated that. But Lincoln didn’t talk about it very much, as to the circumstances around it.

It could have been a tremendous battle in Moses’ mind between obeying God and going anyway. It’s a little bit like Jesus. Jesus couldn’t get to his land of Canaan either. He couldn’t build the kingdom of God while he was here. He had to be crucified instead. In a way, Moses probably felt like he was crucified because he couldn’t enter into the Promised Land even though he spent 120 years preparing for it. He thought/believed he was going into it but God gave him the excuse that he didn’t give him glory at a certain time in his life. It seemed like a small sin for him to commit to not be able to enter the Promised Land. But perhaps it was his fourth initiation.

The reason the fourth initiation is important is because when the disciple has undergone the fourth he is proven he is willing to do whatever is necessary to get the job done. On the third, he proves himself trustworthy. The Masters do not trust a disciple until he passes the third. Until he passes the third, he can always go backwards. After he has passed the third, he will rarely, or it is almost impossible for him to choose the dark side because he’s shown light on illusion. Illusion on the third is different than glamour. We talked about that briefly. What’s the difference between illusion and glamour?

Audience: Glamour is more focused toward you but illusion is mental?

The Nazi’s treated fellow believers well but they were happy about killing these Jews because of this illusionary belief. An illusionary belief can make people do very harmful and crazy things. It can make you drink Kool-Aid, like the Jim Jones people did because they were under certain illusions. They were good people that treated everybody well. But when the time came to drink the Kool-Aid, they complied because the saw Jim Jones as representing God.

Or the Heaven’s Gate group that wanted to go to the spaceship with the Hale-Bop comet a while back. They had the illusion that there was a spaceship waiting for them. Now these people were a logical people. They built websites and did work on computers and they were smart people. They had this illusion that caused them all kinds of trouble. This happens. It is easy to get trapped in illusion. When you cease to think your own thoughts you can become a Nazi or a Hale-Bop type person. In the right circumstance, if you are caught in illusion, it is so easy to do.

Everyone but a third degree initiate or higher is susceptible to being caught in an illusion. To work on our third degree initiation, one of the more important things to examine is our core beliefs and to shed light on them and ask ourselves, does this belief really make sense?

All of us have some type of blind spot that must be dispelled before the higher initiations can be taken. As long as we are capable of having this blind spot, even though we have been really trustworthy in the past, the hierarchy will not trust us completely until that blind spot of illusion is removed. That is why the third initiation, in the eyes of the hierarchy, is the first major initiation because when it is passed then they will say, we can trust this guy because he has eliminated the blind spot and he’s not likely to be caught by some illusion that’s going to take him down. The hierarchy will trust him. They realize he will still make mistakes, but they will basically trust him because he will head in the right general direction.

“Matter is but spirit on the lowest plane, and spirit, we are told, is but matter on the highest. All is spirit and these differentiations are but the products of the finite mind.” DK, Treatise on White Magic, Page 56