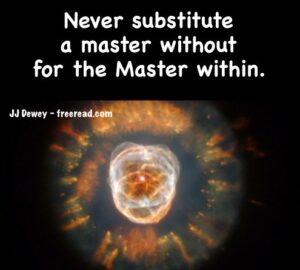 A reader posted some excerpts from a site channeling Jesus and other masters from this link:

I decided to take a look at the site for myself. Consequently, I spent most of my free time today pouring over it.

The channeler is Kim Michaels who sees himself as channeling Jesus as well as the Buddha, El Morya, Archangel Michael, Mother Mary, Saint Germain, Kuan Yin, Zarathustra, Shiva and someone named Omega. He does say though that Jesus is his main master.

His philosophy springs from the I AM movement which morphed into Summit Lighthouse led by Elizabeth Claire Prophet who he proclaims as a true messenger of Christ.

Since he supports Ms. Prophet, he probably sees Alice A Bailey as in cahoots with the Dark Brothers as did Ms. Prophet. I would guess the reason Alice A. Bailey or Djwahl Khul is not mentioned on the website is he doesn’t want to alienate the many who see light in the teachings. His Jesus also condemns The Aquarian Gospel as darkness. He would have to for it teaches contrary things to Ms. Prophet.

Right or wrong he has some interesting answers to some provocative questions and one with soul contact can read them and sift through what does not register and consider that which does register within.

Just don’t make the mistake of accepting the words as infallible because he claims it came from Christ.

Just as there are certain basic doctrines that many differing Christian churches have in common, even so will all metaphysical teachers have overlap.

No matter what the claim is I will check out a new teacher with as open of a mind as possible. This I did with Kim Michaels.

As I looked through the writings I saw some of the basics that is taught by the many, some of which may be in harmony with my teachings, but I saw just as many things that were at odds with what I teach. One thing right off that caught my attention was the question about Glenda Green’s portrait of Jesus. He was asked if that was what he looked like?

The answer was extremely ambiguous. Jesus (through Kim) said that it was a “valid” image but other differing pictures could look like him too. It almost made it sound like Jesus morphed from one form to another while he was here. We know that didn’t happen during his mortality so the answer must be that he was avoiding the answer to the question by basically saying “I can take any shape I want so whatever is drawn of me is correct.”

The person wanted to know if the portrait looked like the Jesus who was in Jerusalem 2000 years ago and the guy avoided the answer. This wasn’t a good way to get me started on my truth detector.

Here is my opinion of Kim Michaels. I think he was a sincere follower of Elizabeth Claire Prophet and studied other materials as well. When Ms Prophet got too ill to continue her work, talk arouse of one to succeed her. As he reflected on the matter the thought kept crossing his mind that it could be him. His constant reflection on the Masters and apparent association with those he respected caused a thoughtform to be created in his aura. He fed this thoughtform over a period of time until it was given birth and became a living speaking representative of the masters. From this thoughtform, some interesting material filtered through his mind and astral body. Some of it is true, much of it isn’t.

Let us examine a few things in the light of day and ask ourselves if the real Jesus or the Christ is speaking to him.

Here are some reasons to question that the real Christ is not speaking to him.

(1) I cannot find a new principle or new light given on an old one that is not already in print somewhere. There is a lot of unprovable data, however.

(2) Kim’s Jesus speaks frequently of the importance of free will yet his mentor Elizabeth Claire Prophet ruled with an iron hand and tightly controlled the lives of followers.

(3) Ms. Prophet obviously read the Bailey writings and took material from them and Kim seems to follow this same trend while rejecting Bailey’s Djwahl Khul as a messenger of light.

(4) Kim says that the Masters worked through Ms. Prophet yet she predicted an Armageddon in the early 90s and led the group to Montana where they heavily armed themselves and dug bomb shelters.

Nothing happened as the masters predicted through her.

If Jesus was behind this, why did I know more than he did? When I heard of this, I knew they were misled about the times and seasons.

(5) He presents himself as being different from Ramtha and other voice channels yet both he and Ms. Prophet channeled by direct voice – a thing that Djwahl Khul says the masters do not use, except on rare occasions where an important need may arise.

He believes that because he is channeling masters and not regular entities like Seth or Ramtha then he is doing something higher than astral channeling. He indicates he does not speak with a different voice or go so deep as to have no memory of what was said. Even so, he is doing basically the same thing as other channels for the supposed masters come into him as they did Ms. Prophet and speak through his vocal cords. This is still direct voice channeling. It just means that he only has to go into a light (verses heavy) trance to contact his thoughtform.

(6) He has his followers repeat simple but select phrases over and over, often 40 times in quick sequence. This produces a hypnotic effect and dims regular consciousness. By repetitively inducing the right phrases over a period of time a controlling thoughtform can be implanted in followers.

(7) He says you do not need to develop the mind to ascend or become like the masters. To eliminate thinking is a step in controlling thinking.

(8) It seems that a large number of very important and busy masters want to use his vocal cords. It is unrealistic to think that they are waiting in line.

He’s got quite a bit of material and it would take me a long time to comment much of it, but this should suffice for now. I do not discourage anyone from seeking truth anywhere. Running a lot of different subjects by your soul can be consciousness expanding, even if they did not come from a master. My advice though is never substitute the master within for a master without.

That which is striking and beautiful is not always good, but that which is good is always beautiful. Ninon De L’ englos