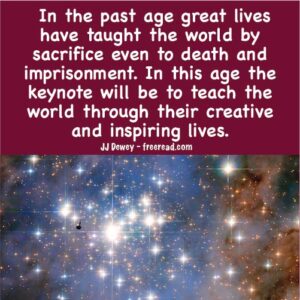 Gathering 2004, Part 6
The Lessons of Sacrifice

JJ: According to Theosophical teachings, if you have unfinished desires, unfulfilled desires, you will gravitate to the basic idea of heaven where your ideas are fulfilled and that will be heaven to you. Then once all your desires have been fulfilled and you don’t need it anymore maybe you’ll awaken and move onto something higher or prepare for another life.

JJ: Devas vary from very small lives to great lives, they’re the builders of the universe. They’re the building lives that give form to everything there is and many angels are also called devas.

JJ: Yea, there is a certain amount of truth to that, that the devachan is built out of desire energy out of the deva lives. We don’t actually directly create them. They gravitate to us. Your whole body is built of little deva and elemental lives. They have gravitated to you. You pull the pieces together.

Audience: You’ve talked in the past about how we’re moving out of the age of sacrifice and into the age of service. How does that reconcile with talking about being willing to sacrifice to achieve enlightenment? To me, that sounds rather old-age-ish.

JJ: The reason she’s saying this is that the keynote for the Piscean Age was sacrifice. The keynote of the new age is something different. That doesn’t mean we leave behind sacrifice. We take the best of the old age and incorporate it in the new. We see the negative part of sacrifice in the religions today. People give a lot of money to their minister and the minister uses it for a  comfortable living and to build stone buildings that really don’t do a lot for anybody. Jimmy Bakker misused all the money he had. People are blindly sacrificing, getting little in return and the money gets misused.

True sacrifice is when you are willing to give in a way that what you give will be used fruitfully. That’s the true lesson of sacrifice. That’s what we were supposed to have picked up over the past two thousand years, how to do that. In reality there is no such thing as sacrifice for when the true principle is followed for a sacrifice is merely an exchange for something desired.

We are moving into the Age of Aquarius and the keynote of this age is service. So, we must take the idea of sacrifice and incorporate it with service. The idea of this age is when we sacrifice we use that sacrifice to serve and create a cause and effect so that everything comes back to us. Jesus talked about this when He said, “I have come that they might have abundance.” He came so that we could have the abundant life. The abundant age He was talking about wasn’t during the Piscean Age. He was looking forward into the Aquarian Age.

The Aquarian Age is the age of abundant life where we will serve and be recompensed for our service. Business is evolving into this. Just a few centuries ago businesses were very selfish. There was slave labor and labor of young children. Conditions were so bad that most people lived only to the age of thirty and died terrible deaths. Now the service is reciprocal. People are getting stock options. They are participating. Many businesses are employee owned with employees having a voice. In the Aquarian Age businesses will evolve, despite the fact that it’s condemned by so many people, it’s evolving and will evolve into a great service for humanity where people will serve then get a recompense for their service.

It will be a very exacting recompense unlike in the Piscean Age where you gave everything and didn’t get much back except maybe in heaven somewhere. Jesus sent His apostles out, they all got killed and drug through the streets and they didn’t seem to get any reward at all. But He said, “In the kingdom of heaven” speaking of the future Aquarian Age, “you will get your reward.” All these guys will come back and have a fairly fruitful time in the Age of Aquarius.

Audience: Do you correlate the seven bodies, the physical, etheric, astral, mental etc. with the bodies we are wearing. The base chakra would relate to the etheric body, the solar plexus to the astral. . .

JJ: The devachan would be like higher solar plexus in connection with lower heart energies. The Christian who dies after leading a good life, believing in Jesus, will go to some devachan where he will have dreams of being in heaven and serving Christ and things like that. A lot of people who have these near-death experiences see a devachan type thing. If they’re a Christian they always meet Christ. If they’re a member of another religion, they’ll meet that guru. Why is this? In the near death experience the Christ that they meet is created by their own soul. What they see is not the real Jesus. They’re seeing a composite Jesus. When Jesus is speaking to them it’s really themselves speaking to them. That’s why He seems so familiar. “I met Jesus. I knew Him immediately. I didn’t have to ask. I knew it was Him.” The reason they have this sense of knowing is because they’re meeting themselves, the Christ part of themselves.

Seek not to follow in the footsteps of men of old; seek what they sought. Matsuo Basho