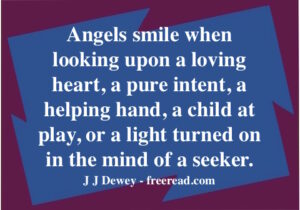 Audience: Is the Solar Angel like the guardian angel?

JJ: The Solar Angel keeps track of you, but you also have a guardian, which is usually a soul more advanced than yourself. There are also entities in the spirit world which assist humanity and are different than the Solar Angel. These are people such as you and me. For instance, if you died, you might want to check in on your son. There is a little interplay but there isn’t as much contact with the dead as people tend to think but there are times when it is allowed to happen, especially when a person hasn’t been away from his body for a very long period of time. After a person is dead for a fair amount of time he ascends through the etheric and up through the astral and up through the higher mental where souls dwell and prepares to be born again. It’s usually only a short time after a person dies that he maintains some type of attention on the earth life.

Audience: How short is the period of time?

JJ: It depends on the person. For a fairly evolved person it’s almost zero. For an average person it could be a longer period of time. When you die you’re still in your etheric body for a period of time. Depending on how earth bound you are determines how long it will happen before that dissolves. Then you go to the astral world then your astral body disintegrates. Finally, you go to the world of minds and that is folded up. Your consciousness follows these bodies as high as your consciousness is. If you’re not on the plane of the higher mind your personality will then go to sleep as your soul essence goes through these worlds.

After you die you go through a series of ascending through various worlds. When you reach the point where your consciousness can’t handle it anymore your personality, or ego self, goes to sleep and you wake up as a higher part of yourself in the soul realm.  Then you’re reborn later subject to different rays creating an altered personality.

Audience: So you feel that at some point in time a person who is moving through these realms breaks off his communication and their connection to the earth?

JJ: Yes. For a lot, it isn’t broken off consciously. Right after death one is in the etheric body. During that time they’ll be aware of everything on the earth. Depending on where their consciousness is, their etheric body eventually will dissolve and break down then they’ll be left in their next body, which is their astral/mental body. The connection to the earth is much more difficult while in the astral body. While in the etheric body they’re capable of maintaining some type of communication but the higher up they get the much more difficult it is to communicate with people upon the Earth unless it’s some very evolved soul.

JJ: I’ve had several people close to me die and I’ve felt communications with them three or four days then it ended. Others of you may have had similar experiences. They eventually move on. One of the reasons for this in the scheme of things is that if you’re able to look back on your wife and see her really upset, instead of moving on and concentrating on other things you’ll think, “I need to do something to help her out and help cheer her up.” All of your attention would be back on your loved ones.

Our attention is directed to the other worlds so we can assist there. We go into a semi-dream state called the devachan. Many people do who live a good life go there. It’s actually a dream state where all our dreams and wishes are fulfilled. When it’s experienced a person doesn’t realize they’re actually dreaming. In this particular sphere they fulfill everything that wasn’t fulfilled upon the earth. If you wanted to be a famous rock star, there in the devachan could be like Elvis or one of the Beatles and have a lot of adoring fans. You would experience all these things there. This kind of prepares you for your next life. There are kinds of different worlds. There are also hells in the astral because there are people who die in a real negative state of mind and will go to negative spheres for a period of time until they realize the illusion and wake up.

JJ: Right. Shortly after you die you have a merging with your Solar Angel. You see every effect you had in your life in your life review. After your life review you lose most of your past life memory. You take the three main lessons of that life with you. So, as you move into the higher worlds you have just a real fuzzy memory of what your life was like. This is so you can focus on the next step you’re supposed to take.

If you go to the devachan you may incorporate a lot of your life into your dreams but you won’t realize you’re dreaming. Houdini may have gone to the devachan and thought he was giving the combination, that special code he was supposed to give to the psychics, it’s quite possible he went to there and dreamed he gave it to them, thinking he gave it to them, but he didn’t in reality..

JJ: It’s heaven. It’s the heaven everybody talks about but it’s just a dream. To really achieve enlightenment as the Buddha talked about you need to go above the devachan, above heaven.

JJ: There is so much to write about that I probably won’t get it all done. Fortunately, a lot of other people are writing a lot of good stuff too. The devachan is covered in theosophy, and also somewhat in the Alice A Bailey writings. I think it’s also from Hindu writings. When you achieve enlightenment like Buddha did, he went to a plane above the devachan. When you’re concentrating on pure service to humanity you don’t need the  devachan heaven. You bypass heaven because you don’t really need it. You don’t really need to fulfill fantasies or the ego’s desires. This is what the Buddha achieved. The devachan is still in the worlds of form. We have the physical, emotional or astral, the mental and the above this is what Buddha is where achieved consciousness.

JJ: If you achieve a real successful life and achieve the goals that you really want then you may not need the devachan.

Audience: Can’t we visit those fantasies through meditation?

Audience: Is the communication two way? Even as we are experiencing are those experiences communicated back to God? Is He participating in them?

JJ: He, through his Son aspect, has no experience outside of us. He experiences through us. He in His unreflected state is in a state of peace, oneness and bliss. That’s why The Son created us, so He can have a roller coaster ride.

Audience: I think it could be worded a little differently. It’s not so much that you don’t care what happens to you but you let go of your attachments to things or your attachment to a form, for example the form I call myself.

JJ: Right. You’re right. Even Christ cared about things as enlightened as He was. What I mean is that you’re not attached to things so that if you see that something needs to be done for the benefit of humanity you will allow yourself to lose your life if necessary. Remember Christ said, “He that loses his life for my sake shall find it. And he that seeks to save his life shall lose it.” In other words, true enlightenment is when you’re willing to let everything go for the greater good. When you have that state of mind, when you’re willing to let everything go whether it be your wife, your kids, your job, your money, your house or your life itself, when you’re willing to let all that go for the greater good and sacrifice it then you’ve made a great step toward enlightenment.

JJ: Well, you’d be willing to do whatever is necessary for the greater good and hopefully none of us have to have that happen.