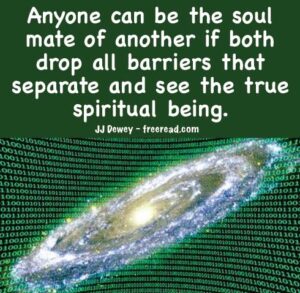 Audience: The rapture has been described in so many ways. Is that just something of a misguided interpretation?

JJ: The rapture isn’t going to happen the way people think of it, not unless there is a true end of the world, then there could be some salvage operation that would go on by the Hierarchy. The rapture is another topic and if we started on it, it could take an hour or so to cover it. I’ll just say this. You’re not going to be flying on a plane and all a sudden a third of the people are just gone because they’ve been raptured. (laughter)

They can wait a thousand years but you’re not going to see something like that happen. Not until we develop a Star Trek type technology and someone does it as a prank. Can you imagine Scottie saying, “I’m going to fake a rapture. I’m going to zap these people off this plane then boom the voice of God over there saying, ‘I have taken my people.”

With the first coming of Christ, everyone expected Him to come just the way they’re expecting Him to come this time. They thought He’d come in a blaze of glory, zap all the enemies, gather the righteous around him and build the kingdom of God. But how many in the entire world were waiting for Him and expecting Him to come the way He did? The wise men did. They were close to being Masters. Teachings were passed down in Persia from Daniel the prophet about the coming of Christ and they understood it accurately.

Among all the people in Jerusalem maybe three or four people expected Him to come the way He did. Remember there is a story of one man who was very old. He said he wanted to see the Messiah before he died. That’s the only person in the Bible who we are told expected Him to be born as a baby. After He was crucified, there were only a hundred and twenty people who were His followers. It appeared He had a failed life despite all the miracles. Things aren’t always the way we expect.

I think we’re going to have a nice time at this gathering. I feel a nice vibration from the people here. I felt it for a couple days. Has anyone else had that feeling in anticipation? Last night when I went to sleep, I saw a lot of colors. There was a lot of violet color which is a good color of spirituality so I expect good things from you people. One of the most important things for a group like this is to feel harmonious with each other. Everybody here seems to have a good attitude. I don’t sense any negativity at all. The fact that I’ve been picking up a vibration a couple days in advance is really good sign that we have a very good group here. We always have good groups but my hope for each gathering is that we will be able to take each group just a little bit farther in spiritual vibration then we did the year before. We will eventually have some fairly interesting things occur.

Since the theme of this presentation  is soul mates, let’s get to that. We’ve been leading to that. The reason we discussed creation is to really understand whether or not there is a soul mate, or what a soul mate is, we have to first understand what we are. Since we are reflections of God, what would a soul mate be? We hear a lot of definitions of soul mate. One says in the beginning twin flames were created then separated and now we need to find our twin flame and that will be our soul mate so we can be our true self merged. There are several teachings thrown around on this.

JJ: That’s kind of a general idea that your soul is your counterpart. What is a soul mate? First of all, is there such a thing as a soul mate?

Audience comment: Can a Monad have more than one reflection?

JJ: Well, a Monad is a reflection of God to begin with so the Monad is already out there. Monads are like potential gods. There are many Monads that haven’t developed into human consciousness the way we have, or consciousness at all. These need to be stimulated. So, as we develop and we enter into the kingdom of God, our job is to turn our own back on the progression that we could make and then help others because before we can move on we must help those who are behind us. That is the rule of things.

Audience comment: So are they sharing the same dream?

JJ: Is everybody sharing the same dream? Are we not all here?

Audience comment: Didn’t we separate polarities and now need to find our other polarity?

JJ: We have to enter into the world of polarities in order to experiience form at all. All form we see around us is caused by polarity. If you go to the formless worlds, you don’t have as strong as polarity as you do, but we never escape polarity entirely. Even in the beginning where there was just a singularity, there was the singularity and the possibility of creation. So there is a duality right there. Duality is never escaped in all eternity. There is always a duality even if you go back to the original point of creation, you have the singularity then you have the possibility of creation still making a duality.

Audience: Can you explain what duality is?

JJ: It’s explained in the first chapter of my book, The Molecular Relationship. It’d probably take me awhile to go into that. In the beginning, we have the point of the singularity which is God and He projects the energy of purpose. Now DK [Djwahl Khul], who we study a lot in this group says something interesting about the point of pralaya which is supposed to be where we go back to our source and beyond dualities. He says, ‘This is not a place which is not but it is a place which is esoteric.’ The word ‘esoteric’ means hidden.

So, the point, pralaya, where we appear to be asleep, where the universe folds up and there appears to be no universe, no us, no consciousness, He says it is not a place which is not, it is a place which is esoteric. In other words, the originating point which is God is not a place of nothingness. It’s esoteric beyond our ability to comprehend what it is, but when we go there a higher part of our self will be able to comprehend it. There is probably some type of duality there. From our point of view, it is sleep, but from there this existence would be sleep. In all of life there is sleep and wakefulness. It’s the same in creation. In the universe of form we have creation then eventually everything dissolves and goes back to its source and it’s created again. So, there is a period of being asleep and a period of being active.

Let me throw out the idea that there are no soul mates the way everybody teaches. Why? Because we’re all soul mates. What does this mean if we’re all soul mates? Why is it then that people report, “Well I met this fantastic female, we struck it off and man, lightning struck and she’s my soul mate. We read each other’s minds, finish each other’s sentences and she is it. There is nobody else that could be my soul mate but her.” Is that true or not? Why not?

Audience: Could it be remembering a relationship in another life?

JJ: That’s generally what it is. If you have a positive relationship with a person in a past life and you died really loving each other, you’ll meet each other again, there will be a fire there and you’ll think, “Man, this is my soul mate. There is nobody in the universe like him or her.” On the other hand, if we say that everybody can be our soul mates, what does this mean? Phillip is a good looking guy here. Let’s suppose he meets someone like that Throw Momma from the Train gal. Could he be a soul mate with her? Could he fall in love with that Throw Momma from the Train lady? Does anyone remember her name? We can call her momma.

JJ: When Danny DeVito saw his mom in the movie, what did he see? Did he see her soul or did he see something else? She had personality up the yin yang, right? That’s what the movie goers saw, lots of personality in this gal and none of us liked the personality, did we? So, how could she be anybody’s soul mate?

Audience: You need to cut through the barrier that surrounds her called the personality.

Audience: She could be a reflection of him.

JJ: Right. All of us have souls which are reflections. Monads and souls are the reflection of God. Keep in mind that Monads help other Monads. The word soul has a lot of misuse. There are two ways of defining what soul is. Soul is that energy which is developed when matter and spirit interplay. Soul is neither matter nor spirit but it is the interplay of spirit and matter. For us to have soul contact, instead of contacting matter, instead of contacting spirit, we contact soul, that interplay of spirit and matter. This is the door that opens up to the spiritual realms. It’s the midway point, the point which is sometimes called the point beyond duality because it’s in between the dualities of spirit and matter. Where they interplay is soul. This is the door to the kingdom of God.

So what does it mean when people say, “Well, my soul told me this or my soul told me that.’? They talk about the soul as an entity. Even many of the great writings in scriptures and esoteric writings will write about the soul as if they’re talking about an individual. There is an entity which is called the Solar Angel. The consciousness of the Solar Angel dwells at the point where spirit and matter touch. The Solar Angel is a being who has progressed in the past solar system. He’s progressed through all the things that we’re now going through until it achieved relative perfection.

When someone achieves relative perfection, he will assist others to achieve it.

So, each one of us has a Solar Angel that works through the soul energy with our souls, where sprit and matter interplay to commune with us. Our job is to open the door of soul through meditation, contemplation, prayer, right living, to open that door and have our consciousness penetrate the soul until we can receive instructions from our Solar Angel, which is kind of like our personal God. When people receive instruction from their Solar Angel, they think they’re getting a revelation from God.

One of the advantages of being disorderly is that one is constantly making exciting discoveries. A. A. Milne (1882 – 1956)