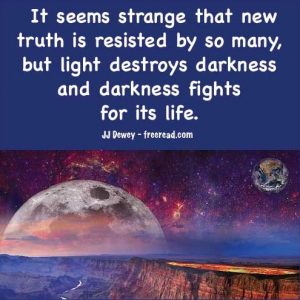 The Question ( See Finding Balance Part 1): Suppose Stan and Lonnie learn about the teaching on energy and accept it. What should they do to reach the zero point as a unit? Do they have to split up or is there some way they can keep their relationship and obtain it?

The same goes for Ron and Mary. Ron is a +3 and Mary is a -9. The charge is just what is for a particular life and changes very little. It is like height or skin color. You do not work at changing it but just accept what you are and make the best of it.

“But can’t they do something to reduce their charge so the zero point can be reached?” asked one.

To understand the situation let us go back to the flowing river analogy. If you are swimming in the river would you even consider using your will to change the direction or strength of the current?

If you want to stay in the zero point you cannot just relax as if you were in a still pool. To remain stationary you must swim against the stream with a certain and constant amount of force.

This is the way it is with our male-females overall charge. These are currents of force that pull us in a certain direction. If the disciple wants to reach the zero point yet is a plus three out of balance in his overall relationship then he must apply three units of constant force, by the power of his will, to stay at zero. In addition he must apply more than three units of force to move against the current.

Now the person who is out of balance winds up getting tired like the swimmer attempting to be still in a current. He only stays near the zero point a short time. As soon as he relaxes he goes back to being three points out of balance.

The key is not to use constant force of will to get to the zero point (on consciousness) but to balance the forces around you with other associates who add balancing energy. When this happens little or no current then pulls on you and it becomes much easier to stay at zero point and commune with the higher worlds without illusion.

Both gays and hetros have their peculiar difficulties in reaching the zero point as far as mastering the flow of energies.

The hetros have a chance of doing it but they have a disadvantage over gays in the fact that the swing and variety of their energies is all over the scale. This means that not too many male-female relationships, if randomly brought together, would be in balance. About one out of ten are lucky enough to be close, so the couple does not have to swim with difficulty to stay near zero.

The gays have the advantage of having their natural energy already near the zero point. They rarely appear in the extremes of energy as happens with the hetro. This makes it easier for the average gay to get along with and understand another gay than it is for the straights to relate to each other.

The disadvantage is that two gays in relationship are the same charge and when two of the same sex unite it is like two small currents combining to make a greater current which pushes away from the zero point. But because the gays are swimming in weaker currents to begin with, the change in current that pulls out of balance is not as noticeable as it is with the hetro.

With the hetro you have one current going one direction uniting with another current going the other. The weaker current is then cancelled out and the current continues in the direction of the stronger, but with reduced force. If both currents meet with the same force they will cancel each other out and the couple can enjoy the stillness of near zero energy disturbance.

Note that I use the term “near zero.” This is because we never remain at exactly zero in our energy, but we can reach a point where the energy does not disturb.

So, we are back to the question of what Stan and Lonnie should do since their natural combined energies equal = +1.5. This is not a big pull of energy, but is enough to create a distraction so constant effort must be made to focus the inner attention on point zero.

Stan and Lonnie are great friends. They love each other and are committed to the relationship. It is not worth it to them to part and seek balance in anyone else male or female. They feel they would be betraying each other if they were to do so.

Now there are others in relationship, hetro and gay, who are so out of balance that they may relish to idea of moving on to someone new to find greater balance.

Stan and Lonnie do not feel this way, but do want greater balance. What are they to do?

There are two things they need to do if they are to stay in relationship, yet obtain balance.

First they must insure that they learn the right use of sex so their attention can be directed to the soul, rather than the ego. It does little good to approach the zero point in energy if all that is contacted is the lower self.

I have written some about right use of sex in references to gays but do not feel inclined to write more. Those who are ready to balance and use the zero point to enter the doorway to the soul must commune with their own souls about sex. If they seek with a sincere heart they will know what to do.

The ideal would be for Stan and Lonnie to befriend a female couple with a corresponding opposing charge to their own. When they meet the females with the right energy it will just seem right to them. They each will feel more peaceful and stable.

The ideal would be for the four of them to move in together or live in close proximity. As long as Stan and Lonnie have a committed relationship though neither should have sex with the females, but only seek to establish relationship and balance their energies.

If living in close proximity is impractical then the four could seek to work together or plan activities together. In other words, do what is necessary to establish as close of a relationship as possible with the group of four.

A point to keep in mind is that most people do not naturally gravitate toward the zero point, but away from it. Only those who are attracted to the spiritual path and do some internal reflection are willing to go against the standard thoughtforms that govern society.

I intend to live forever – so far, so good. Steven Wright

I found this post from another group interesting and it gave me a chuckle at the same time. JJ

I Derek Joseph Chin predict that the world will soon learn that the ”grey” aliens of UFO Television Documentaries are not aliens and are not from outer-space. We will learn that they are ”clones.” That they have been around for eons and that we made them in a long forgotten technological past. That they are not our saviours but rather an evil presence that has plagued and manipulated mankind since time immemorial. We made them using the DNA of Humans, Sea Turtle and Dolphin. Gene splicing it’s called. The ”grey” is the last of the hybrid creatures of our mythical past, the most efficient one. It was used as a deep space pilot that would also maintain stasis cylinders with Human Ancient Astronauts that would barely age during these deep space flights. This will account for archaeological sites that have been reported on Mars and the Moon. They are our archaeological sites from ancient times. It wasn’t ancient astronauts from space people…….. it was US!! The problem is, is that these ”it’s” are still keeping people in stasis cylinders, but not for deep space flight. For their own genetic needs. For the DNA they need with which to clone themselves. Without us and our animal and plant life, they would be nothing. They are living breathing FEAR. They smell like DEATH and can’t see BLOOD or the colour RED. They thrive on Human bodily fluids. I HATE them!!!!!!!! They manipulate us all. They are the root of all evil. They are the ”succubi” and ”incubi.” They are the ”faerie” and the ”troll.” ”it” is and was the ”serpent” in the Garden of Eden. Today now, I COMMAND ”it” to leave our WOMEN alone!!!!!! And our Babies……… damn them to the pit’s of HELL where they reside. They are the ”pitiless” ones.

Bad pains in my head whilst doing this.