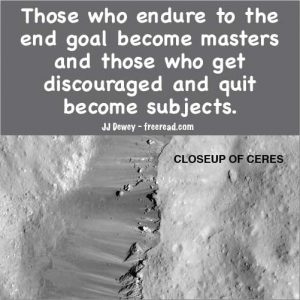 Enduring to the End

Several times did the Master Jesus make the statement:

“He that endures to the end shall be saved.”

What exactly did he mean by this?

To understand let us examine the famous scripture on the matter:

And many false prophets shall rise, and shall deceive many. And because iniquity shall abound, the love of many shall wax cold.

Here he told his disciples that many would be offended by them and hate them and eventually even kill them. Even though they were to expect many deadly trials they were told to “endure to the end” to be “saved.”

Many have heard this scripture preached in church, but let us look a little deeper.

“Endure” comes from the Greek HUPOMENO and means “to remain, abide, not recede or flee.”

“End” comes from TELOS which is “To set out for a definite point or goal, the conclusion of an act.” This implies that one makes a decision and perseveres until the decided goal is reached

“Saved” comes from SOZO which is “to save, deliver or protect.” The similar word “salvation” comes from SOTERIA which is more correctly rendered “deliverance” or “rescue.”

How then can we best translate this phrase.

“He who shall make a DECISION and take an immovable stand on that decision until the goal is achieved shall be delivered.”

But shall be delivered from what?

The answer is obvious. He shall be delivered from failure.

Why is it important to be delivered from failure?

(1) If the end goal (TELOS) is a noble one (as one proposed by Christ) then the achieving of that goal is of great important.

(2) If a person makes a goal and fails to achieve then he becomes weakened and usually has less power to achieve the next goal he sets.

(3) If a person fails in a noble venture affirmed by his soul, then to quit is to lose faith in the direction set by the soul. As a result soul contact will be diminished until the steps are retraced and success is achieved.

(4) Failure to achieve often brings depression, grievances, and too much attention on the little self – as well as the blame of others.

The power to endure to the consummation of an act of Decision is the power to achieve all things.

Because if a person makes a decision (in harmony with Higher Will) and then moves toward that decision without giving up, then no power in heaven or earth can prevent the person from achieving the goal.

Napoleon Hill spoke truly when he wrote these inspiring words:

“Whatever the mind of man can conceive and believe, it can achieve.”

Throughout my life I have sold to and had relations with thousands of businesses in over 20 states and I have made it a point to observe those who succeed and those who do not.

One may assume that the successful ones are the smart ones, those who have business savvy, or perhaps are a bit shady – but these are not the criteria in common among those who succeed.

In fact, many of the most intelligent people I know have plunged in business have failed miserably and many people who are kind of slow and lack of imagination seem to come out in great shape.

What then is the characteristic that the successful ones have in common?

Answer: It is endurance. Those who endure to the consummation of their goal are the ones who achieve the goal.

On the other hand, if you do not give up (and one-pointedly focus on the goal) no matter what your handicaps and how limited your support, it is only a matter of time before you draw to yourself the ingredients to success.

Now many of us here have goals much higher and in many ways more important than those of the business world. I am familiar with the goals of a number of you and I commend you for them. In addition to this, I have known many people throughout my life with spiritual intentions who have had high goals and made what they thought were definite decisions in relation to them.

Even so, it seems that the discouragement and frustration of those on the spiritual path are much greater than those entrepreneurs of business. Why is this?

Several reasons. First a goal on the spiritual path rouses the interest of the quiescent soul and new and living energy is poured into the seeker. This inflow of energy creates a vacuum in its wake that allows for negative energy to pull the seeker away from his decision. This is as it should be for each step forward and each success of a spiritual nature must be earned and cannot be given.

Thus the negative pull often overwhelms the unprepared aspirant and makes him quit on the verge of a great victory.

When he quits he always has many good sounding excuses which plays well to his lower personality. Here are a few of them that frustrates him in group work – for all soul inspired work is of group nature:

(1) The people I am working with seemed all right in the beginning, but now they have all gone astray and wouldn’t know what spiritual is if it stared them in the face.

(2) Several co-workers have insulted me. No one can expect me to work with such people.

(3) I was deceived about the goal. It seemed to be good, but now I see it is a bunch of BS.

(4) I have replaced the old goal with a new and improved one. (Note: This is possible but rarely the case).

(5) There’s too much conflict among those involved in the project. I will quit and work in more peaceful circumstances.

(8) This revolting person joined the group and if he stays, I go.

(9) Several problems and delays occurred which are a sign from God that I should withdraw.

(10) No one is doing anything that will insure we achieve the goal.

Note: This next one always gets me because if the best people quit then things will only get more difficult.

(11) I will quit until the group gets their act together and then come back in when I can be of more service.

Note: This one gets me too because this person usually quits at the time of greatest need. When this happens he rarely comes back, and if he does, it is to enjoy the fruits garnered by the labor and endurance of others.

(12) The goal is too difficult. We can never achieve it.

Note: If that is what you believe then it will be done to you according to your belief.

(14) My spouse or family does not support me.

(15) The group is composed of hypocrites. I can’t be expected to put up with them.

This is by no means a complete list. Excuses are without number – and that’s what they are – excuses.

All who aspire to the spiritual path want to become an accepted disciple and beyond as quickly as possible, but often the most important key is overlooked.

What is that key?

He who endures to the consummation of the goal will be delivered from failure and move on to a new level of success, joy and peace.

May we all endure in the light of the soul and remember the Affirmation of the Disciple:

I am a way by which men may achieve.
I am a source of strength, enabling them to stand.
I am a beam of light, shining upon their way.
And thus I stand.

And standing thus revolve
And tread this way the ways of men,
And know the ways of God.
And thus I stand.”