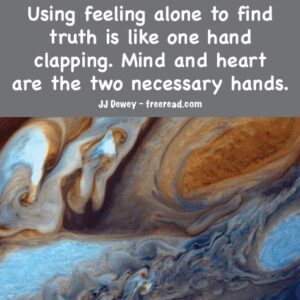 Let us look at the next verse:

“And he opened the bottomless pit; and there arose a smoke out of the pit, as the smoke of a great furnace; and the sun and the air were darkened by reason of the smoke of the pit.” Rev 9:2

“And he opened the bottomless pit.” What does this mean?

When immersed in the emotional world the seeker is as one in darkness with no top or bottom. He cannot see to solve the many problems brought on by the upside-down emotional directions he perceives.

Things are much different when the emotions are mastered. The angel fell to the earth where he could stand on solid ground to examine the emotional world from grounded common sense (the earth) as well as through the use of the intuition (from heaven).

But opening the emotional world which has been suppressed or misdirected for lifetimes is a little like opening Pandora’s Box, not only for himself, but for all trapped in the bottomless pit of emotional focus. He must remember this injunction from the writings of Alice A. Bailey:

“Let the magician (disciple) guard himself from drowning at the point where land and water meet. The midway spot which is neither dry nor wet must provide the standing place whereon his feet are set.”

The disciple standing upon the earth, but linked to the soul, sees the problems created by suppressed emotion and pronounces the right words to stimulate and release them. When he does this “there arose a smoke out of the pit, as the smoke of a great furnace…”

When the pent up and previously uncontrolled emotions are released and examined in the light of day a great emotional fire ensues and the smoke of that fire blurs the vision of all except the angel with the key.

The disciple works through his own emotions that were previously unseen and unrecognized as well as many others that he contacts. He finds that simple statements of truth create powerful emotional reactions among those polarized in the emotional world around him. It seems as if he creates an emotional fire in the hearts of friends, family and contacts and the smoke of that burning blurs the vision of all so nothing he says is understood correctly.

“and the sun and the air were darkened by reason of the smoke of the pit.”

The sun (truth) and the air (reason/mind) were darkened because of the smoke of powerful emotional reactions.

Verse three reads: “And there came out of the smoke locusts upon the earth: and unto them was given power, as the scorpions of the earth have power.”

What are the locusts and how do they have power as scorpions?

There are four symbols to keep in mind as we continue. They are:

[3] Earth and vegetation symbolizing seekers who appear to be grounded with worldly wisdom.

[4] Water. The seas and the deep waters of bottomless pit symbolize emotion as well as those grounded in emotion.

The locusts symbolize the destruction and disturbance caused by the release of suppressed or fomenting emotion and guilt. These released negative emotions have power like a mindless scorpion. They hurt but do not kill.

Verse four reads: “And it was commanded them that they should not hurt the grass of the earth, neither any green thing, neither any tree; but only those men which have not the seal of God in their foreheads.”

Just as a locust normally goes after anything green to consume even so will a negative emotion attack any aspiring life (green thing) that gets in its way.

In this case, however, the disciple, under the direction of the fifth angel (heart center, spiritual love), has power to direct destructive emotion to a desired end. In this case, he directs the emotion to not mindlessly attack any life that aspires to know God with the mind and common sense, but only those who do not seek to know him, or do not have thoughts of the spiritual path in their minds (foreheads).

Keep in mind that the forehead, or mind and common sense, are emphasized. Those who are vulnerable are not only the godless but the religious ones who do not know God with mind but only seek him through emotional feeling with reason not being a factor.

Negative emotion loses its power when the mind knows God but increases in power when God is only sought through non thinking emotion.

Verse 5: “And to them it was given that they should not kill them, but that they should be tormented five months: and their torment was as the torment of a scorpion, when he striketh a man.”

Negative emotions which are released when truth is presented include fear, jealousy, hurt feelings, hate, anger, worry and most potent of all guilt. These do not kill a person, but torment those who do not seek God for a long time (five months) and guilt especially is like “the torment of a scorpion, when he striketh a man.”

Verse 6: “And in those days shall men seek death, and shall not find it; and shall desire to die, and death shall flee from them.”

To him who does not seek God with the mind (seal in the forehead) will come such devastation through negative emotion and guilt that he will desire to die rather than live, but will fear taking his own life so “death will flee from them.”