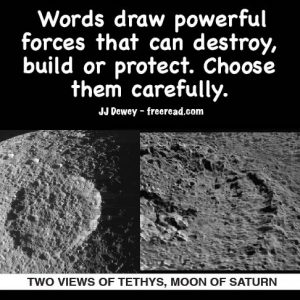 I think the group is getting the general idea of the catch phrase as compared to the aphorism.

Here are some catch phrases that have been suggested.

These phrases are more emotionally based than the earlier bunch. Some of them are still aphorisms, however. Even though aphorisms have a mental appeal they can also be used to reach an emotional level for good or evil.

Perhaps the most significant use of an aphorism to reach the emotions of a people was done by Abraham Lincoln as he was running for a second term amidst great criticism.

When many were clamoring for a “regime change” Abe replied back:

“You don’t change horses in the middle of the stream.”

This had both mental and emotional appeal. Unlike today, almost everyone in that age had crossed a stream on a horse and there were many close calls to catastrophe. The thought of changing horses in the middle of a swift stream indeed brought up a negative picture. This catch phrase/aphorism was so powerful that it possibly changed the course of history.

The funny part is that this catch phrase presented some truth but far from infallible truth for Lincoln himself went against the idea perhaps more than any man in history. Instead of keeping his generals in the midst of the stream of war he changed them again and again until he got a good one, who was Grant. If he had not changed horses (generals) he would have lost the Civil War.

So it is interesting that the use of this catch phrase won him the election and the ignoring of it won him the war.

At least this catch phrase had some truth in it and also had some emotional appeal, but the most deluding ones have little appeal to the mind.

For instance, Bill Clinton probably owed his first election to the catch phrase that we had “the worst economy in 50 years.”

Actually the recession was mild and was passing as he was saying this and was on an upswing that lasted for seven years by the time the election was held. Also the economy was much worse under Carter with interest rates approaching 20% with a cloud of doom hanging over the nation.

Even though there was very little truth in this statement the public swallowed it and history was changed.

Another very deceptive catch phrase in circulation is that in pursuing the toppling of Saddam Hussein that many are calling the United States a “bully nation.” This catch phase has done much to convince the peoples of the world that the U.S. was the bad guy, many thinking it was worse than Saddam Hussein’s government was.

Let us examine the logic behind this accusation by comparing these ingredients to the characters in a movie.

An evil mastermind (Hussein) surfaces and takes over an island (Iraq/Kuwait) and holds the people hostage and makes threats to extend his influence to the extent that he could disrupt the freedom of the whole planet.

All the leaders of the world turn into wimps and negotiate to the extent that it looks like it looks like the mastermind will get everything he asks for and will completely dominate the situation.

The leaders (UN) are convinced they are following the best and safest path and have things under control.

Then a James Bond type character (United States) surfaces who correctly assesses the situation and sees that catastrophe will result if something is not done. He tries to convince the authorities (UN) of the real danger and to get support to topple the Mastermind by any means necessary. The bureaucracy ignores his logic and decides to pursue a course of appeasement.

Then the Bond character discovers that, in addition to the danger posed from the mastermind that numerous members of the bureaucracy (France, Germany Russia, China, Jordan) are secretly selling arms and supplies to the mastermind. He is outraged and realizes that getting support from the bureaucrats is now impossible so he decides to take action himself.

Then with just a one or two sidekicks (Britain and Australia) he tackles the Mastermind. When the bureaucrats find out his plan they do everything in their power to subtly prevent his success. But even though Bond has little support he perseveres and eventually succeeds.

Finally, after his success he receives modest acknowledgement that he did the right thing, but there are some bureaucrats who are yet seething more than ever and will give him a problem another day.

Now when has an audience ever watched such a movie and thought to themselves that the Bond character was the bully? Who do they see as the true bullies? Yes, the mastermind, but often the bureaucrats who get in the way are even more aggravating.

Even so it is a stretch of the imagination to call the United States a bully for liberating an oppressed people.

Another deceptive catch phrase is “tax cuts for the rich.” This statement is currently used blindly by many who oppose any tax cut in any circumstance because it may take away from their power to spend. This statement is used even if every taxpayer gets a cut.

Then the other end of the spectrum uses “tax and spend” in referring to liberals. This is also blindly used at times against any liberal who is not liked.

The bottom line of the point being made is that the catch phrase has temporary appeal to a temporary situation and appeals strongly to the emotions.

A true aphorism is timeless and always has meaning such as: “The truth shall make you free.”

The mental person will not allow himself to be swayed by a catch phrase alone. He may consider it but will check out the truth behind it. He will never use one with deceptive intent.

Now we will move on to the next characteristic of the mental/emotional person.

The mental person will use a concise definition of terms in the use of his words in an argument. He will also be consistent in how the word is used in context. He will not attempt to use words deceptively, but to portray reality as he sees it as well his true thoughts.

The emotional person will often have a nebulous feel as to the use of the word and will rarely define concisely unless forced to do so by the course of the argument. He will be inconsistent in the use of key words and will often use them deceptively without being aware he is so doing.

Food for reflection: One of the most misused words is “freedom.” What is the difference between how the mental person sees and uses this word compared to the emotional?