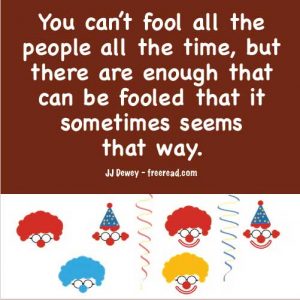 I checked out the time traveler site recommended by a reader and found it quite interesting.

First of all I will say that I am inclined to believe that we are not visited by physical time travelers. One reason is this.

Let us suppose that a time travel machine was invented in 2036. This would attract the attention of many people and it would not be long before every man and his dog would be either building or buying one. Mass production would make them readily available and it would be entirely possible that within 50 years after the invention that they would be as popular as the computer is today.

Now let us suppose then that by the year 2150 that 100,000,000 people had access to time travel. How many time travelers do you think each of us would be running into? Every time you go to the grocery store you’d be bumping into a couple.

Also, Kennedy and Lincoln would not have been assassinated for a number of time travelers could not have resisted going back and rescuing them. There would have been quite a few appearing just before 911 to warn us of the disaster.

This is indeed a strong and logical argument on the side that physical time travel has not happened.

One could argue that in the future time travel is controlled by strict laws, be even here some would get away with breaking the laws and play around with changing the past.

That said, I found John Titor’s (the time traveler) predictions quite interesting. If Russia does attack us in 2015 I will take a second look at my belief system. (Written in 2003)

There is one prediction that made a lot of sense to me and that was his prediction of a civil war in the U.S. in 2004.

Actually, this country has been in a civil war on the astral plane since the close 2000 election. Since then the far left has been seething with anger and seeking for any chance to get even. Thus we do have the danger of this astral war extending itself to the physical plane. If we were to have a second controversial election a physical conflict could be externalized. If Bush wins again the forces of attack could come on stronger than ever.

If Howard Dean (or someone else) wins and attempts to take away additional freedom of speech – such as implementing the Fairness Doctrine that is talked about – (or increasing taxes) then the conservatives could rebel.

Whatever the case the tension between the two extremes is going to get worse before it gets better. This doctrine that everyone is preaching about accepting diversity is being thrown out the window with extreme hypocrisy.

Back in 1997 when I posted the first Immortal book online I received some interesting letters from a guy who claimed to be a time traveler. He said he was from a couple hundred years in our future where he lived on Europa, a moon of Jupiter. He said he did not travel here in the physical, but was borrowing a body to do research in our time. He said that there had been a great war a few years in our future and that his time only had a sketchy history of events before the war. He had come back in time to study our history so the future could have an accurate and more complete account of what happened and the causes of the war.

Too bad he could not give me immediate predictions because of his lack of knowledge of our time period – so he said.

Question: DK said in “The Externaliszation of Hierarchy” that the Forces of Light actually triumphed in the conflict of Atlantis and you seemed to indicate otherwise. Which is right?

“The cleavage between the two groups (the one expressing the forces of materialism and the other the energy of light) grew gradually wider until towards the close of the Atlantean Age it was so wide, and the lines of demarcation between the two schools of life and thought were so clear, that a crisis was precipitated in the then civilized world of which the present conflict is a definite effect. Let us also hope that it constitutes a climax which will never again occur. Then took place the great war between the Lords of Form and the Lords of Being, or between the Forces of Matter and the Great White Lodge. A careful study of volume two of The Secret Doctrine will prove enlightening to students, if they will study with particular care pages 275-466. To our understanding, this account may seem vague and obscure, but the issues at the time were clear. The Forces of Light triumphed because the Hierarchy was forced to intervene potently, and, with the aid of certain great Lives extraneous to our planetary life, They brought the Atlantean civilization to an abrupt end after a long period of chaos and disaster. This took place through the medium of a culminating catastrophe which wiped hundreds of thousands of human beings off the face of the earth. This historical event has been preserved for us in the universal legend of the great flood.” Externalization of the Hierarchy, Pages 122-3

On the other hand in the same book he says: “Its appearance, expression and activity upon the physical plane for the first time since it withdrew into the subjective side of life and focussed itself on the mental plane (instead of the physical) during the days of ancient Atlantis and after the war between the Lords of the Shining Countenance and Lords of the Dark Face, as The Secret Doctrine calls it. For millions of years, AS A RESULT OF THE TRIUMPH OF EVIL IN THOSE DAYS, the Hierarchy has stood in silence behind world events, occupied with the following work-a work which will eventually be carried on exoterically instead of esoterically:” The Externalization of the Hierarchy. Page 519

Also in Treatise on Cosmic Fire, page 392 he says: “The Lords of the Dark Face, or the inherent forces of matter FOR A TIME ACHIEVED SUCCESS, and only the fifth round of our chain will see their ultimate defeat.”

Why the dichotomy here?

The answer is quite simple. The Dark Lords won the great battles in the days of Atlantis but the overall war extends over millions of years.

From the short term angle the Dark Lords had their victory, but from a wholeness point of view the Lords of Light moved a step forward after the destruction of Atlantis.

It all comes down to the attitude of the observer best demonstrated by the story of Edison.

A reporter once approached Thomas Edison as he was working on the light bulb and said: “You have been working on this silly light bulb for years and have attempted 10,000 times to make it work and they have all failed. After 10,000 failures are you now prepared to admit that this light bulb idea is just a dream?

Edison wisely answered: “My dear friend. I have not failed as you have said. Instead I have successfully identified 10,000 combinations that do not work. I am 10,000 steps closer to success and do not have many more to go.”

DK thus called the conflict in Atlantis a success, in this instance, not because a victory was achieved over the hearts of men, but because the Hierarchy had worked out a lot of bugs to prepare for the successful win during the two great world wars and the laying of the foundation for the great age to come.

“Correct response to one’s environment will result in correct rapport with the soul aspect, hidden in every form, and will produce right relations between the various parts of the inner nervous structure to be found in every kingdom of nature, subhuman and superhuman.” DK Treatise on White Magic, Page 21