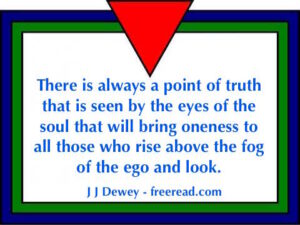 The War in Heaven

Next, we examine these verses:

“And there was war in heaven: Michael and his angels fought against the dragon; and the dragon fought and his angels, And prevailed not; neither was their place found any more in heaven. And the great dragon was cast out, that old serpent, called the Devil, and Satan, which deceiveth the whole world: he was cast out into the earth, and his angels were cast out with him.” Revelation 12:7-9

When you think of it “war in heaven” is a peculiar phrase. After all, is heaven really heaven if a great war is going on?

Where is this heaven wherein war is taking place? While it is true that there has not always been peace everywhere, even in the council chambers of the Most High, we must look to the inner meaning of heaven to heighten our understanding.

Heaven, as we have indicated, represents higher consciousness, which unfolds with the activation of the crown center. The revelation of higher consciousness reveals the duality of the fiery dragon and the Archangel Michael. Before this knowledge comes to the disciple, he sees himself as being in a state of oneness with the whole, or with God, but now discovers this thinking covered a final illusion with which he must deal.

Michael comes from the Greek MICHAEL, which is derived from the Hebrew MIYKAEL, which, in turn, is derived from three words. First MIY, meaning who or he. Secondly, KIY meaning assuredly or surely, and finally EL which is translated as God or sometimes mighty or strong.

The standard translation of Michael is “one who is like God,” but if we translate without orthodox filters we can arrive at a more accurate meaning.

This is particularly interesting when we consider that the identity of the mighty and strong one in Isaiah 28 has been a mystery to many students of scripture.

Who or what then was at war when the consciousness of the disciple ascends to the presence of God? Fiery desire and aspiration conflicted with Michael, or the realization that “the Father and I are one” and all power is given in heaven and earth, making the disciple mighty and strong in the spirit.

Basically, the fight is over whether to submit to the highest aspirations of the ego, (which seemed so righteous at one time) or to what is now realized to be the mighty and strong will of God.

The angels are the thoughts that branch off from both lines of thinking.

“And prevailed not; neither was their place found any more in heaven.”

A much more accurate translation is found in the Concordant version which reads:

“And they are not strong enough for him, neither was their place still found in heaven.”

The battle comes down to a contest of strength, and the will of God manifested through the Spirit (heaven) to the disciple overcomes the once powerful ego, even an ego that seemed aspire to be like the Most High.

“And the great dragon was cast out, that old serpent, called the Devil, and Satan, which deceiveth the whole world: he was cast out into the earth, and his angels were cast out with him.” Revelation 12:9

The ego, even that higher heavenly ego that seemed to serve a great purpose now becomes the adversary (Satan) and is cast out of higher consciousness to the earth, or lower consciousness. Notice that the dragon is not destroyed. Instead, it is taken out of the controlling center (heaven – crown chakra) and placed in the lower nature – the earth.

Thus is the disciple able to live in the world with his ego, but not be of the world because his higher nature or God self is mighty and strong and prevails.

The next verses read:

“And I heard a loud voice saying in heaven, Now is come salvation, and strength, and the kingdom of our God, and the power of his Christ: for the accuser of our brethren is cast down, which accused them before our God day and night. And they overcame him by the blood of the Lamb, and by the word of their testimony; and they loved not their lives unto the death.

“Therefore rejoice, ye heavens, and ye that dwell in them. Woe to the inhabiters of the earth and of the sea! for the devil is come down unto you, having great wrath, because he knoweth that he hath but a short time.” Revelation 12:10-12

Let us begin with verse 10:

The disciples hear a “loud voice” or come to a powerful awakening.

“Now” used here is an interesting word to contemplate. The instant the adversary, the fiery dragon, is removed from heaven and cast to the earth – at this instant salvation and the kingdom of God are available. This tells us that before the dragon is put in his proper place the disciple does not live in the kingdom.

What stands in the way?

The dragon is that powerful desire to serve the self. The dragon made it to heaven because the disciples, even after they achieved group soul contact, had not completely let go of the ego and were deceived into thinking the higher needs of the ego were the needs of God.

Eventually the Christed one and the group prevail and center themselves on heaven, spirit and the needs of the many rather than the needs of the one. It matters not how benevolent that need may be.

When the dragon of zealous and illusionary aspiration is cast down, and the group allows the spirit to flow, a breakthrough is made and several things happen:

Instead of worshipping the lower nature, and serving it, the disciples are free from its mastery and can finally choose the higher way of spirit.

Before deliverance the ego and outside gods were all powerful. Now, for the first time, the disciples wield true spiritual strength which branches down to strength in every needed way.

The dark and dreary world is now a thing of the past. No matter what is happening on the outside the disciple now discovers inner peace and joy. His higher vision sees the true kingdom of God.

“Power” in this verse comes from the Greek EXOUSIA which is more appropriately translated as “authority,” as it was in this verse:

“For he taught them as one having authority, and not as the scribes.” Matthew 7:9

Actually, authority is closer to the core meaning, but no English word does it justice. Thayer’s Lexicon defines it as the “power of choice, liberty of doing as one pleases.”

Now we see why the authorities were so disturbed at Jesus. He did what he pleased and taught as he pleased without subscribing to what was politically or spiritually correct at the time. Nothing irritates the powers-that-be or want-a-be powers more than to see a free spirit doing as he pleases, flaunting convention.

The dragon holds this power in check and demands homage to powers that restrict the Christ within. When the dragon, or ego, is finally cast down then the Christ consciousness manifests and has power of decision within the mind of the disciple.

“… for the accuser of our brethren is cast down, which accused them before our God day and night.” Revelation 12:10

As long as disciples feel negatively affected by accusations the dragon is not yet cast out of heaven. Is he easily offended? Then the dragon is still there seeking control.

How does the dragon accuse?

Since this section largely applies to the students of the initiate we must look at group dynamics.

The weak links in the group will be offended and accuse others of doing them harm.

The weak links will suffer personal guilt and seek to spread it to his brothers.

Some will seek the authority of the dragon over the group and by subtle means seek to control the individuals to serve his own desires.

Next it is written:

“And they overcame him by the blood of the Lamb, and by the word of their testimony; and they loved not their lives unto the death.” Revelation 12:11

We know that early Christians sacrificed their physical lives for Christ, but is there another meaning to “they loved not their lives unto the death?” What would this be?

Rogues are preferable to imbeciles because they sometimes take a rest. Alexandre Dumas (1802 – 1870)