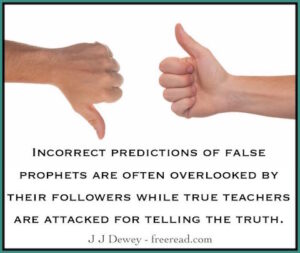 Coming in the Clouds

A Reader writes: You often give interpretations that differ from the mainstream literalism.  Many Christians are expecting a literal fulfillment of the Second Coming of Christ, appearing in the clouds with angels and destroying the wicked.

What is your view on this?

JJ: There are two main points to consider before answering your question.

Point One: Rarely has any scriptural prophecy been shown to be interpreted correctly.

The prime case in point here the misconception the masses had about the first coming of the Messiah. All but a small handful were expecting him to come as a conquering hero to overthrow the Romans. Many who lived 2000 years ago had the same mindset as do believers today. They anticipated a supernatural coming in the skies where the Messiah was going to burn the enemies of Israel “as stubble” (Mal 4:1) and preserve the righteous who will then live under a perfect dictatorship.

As usual, the vast majority were wrong.

Now fast forward to the past century and we have seen dozens of religious leaders who have carefully examined the prophecies of Daniel, Revelations and Jesus and have come up with specific prophecies of the Second Coming of the Messiah. The result? All have failed. All now look foolish.

In fact, I can’t think of one person who has yet used the Bible to make an accurate prediction.

Point Two: Common sense does not favor the orthodox view.

Just think about this for a moment. You and your neighbor are out mowing lawns the same time. Suddenly you notice a flash of light in the east. You see a man floating in the air followed by thousands of angels. Your neighbor is an unbeliever and gets zapped by fire and starts burning as stubble before you. You look down the street and see all but a few homes are also zapped and people are running around on fire screaming in pain as they burn as stubble.

You are OK though because you believe. You go inside to tell your spouse the good news, but find her crying. You ask her why.

She says your rebellious son caught fire and burned up while playing a video game.

Suddenly you are lifted into the air with millions of others and are somehow able to see and hear Jesus as if he were right in front of you. He tells the group the wicked are just about done burning and as soon as the last evil doer is gone he will snap his fingers and turn the earth into a paradise and settle everyone back down.

You ask about your son who was burned to death.

Jesus tells you that you are better off without him – that from now on no wickedness will be permitted.

This is the gist of the various beliefs on the Second Coming. Now we could pick several other versions and they would sound just as fantastic.

Are the scriptures wrong then?

No. They are merely misunderstood.

There are a number of corresponding interpretations that can explain the various prophesies. The ancient Jews believed that the scriptures have three or more possible interpretations and I accept this idea.

If Christ were here on the earth today, he would probably travel by airplane and appear on TV. He would thus be coming in the clouds and all people could see him together. The heavenly hosts could be spiritual mortals who work with him on the earth.

Then there is other meanings A cloud represents a veil between lower man and higher spiritual presence. By coming in the clouds, the presence of Christ will be hidden from the masses even while he is here. He will be seen, but not recognized.

Now we come to another scripture that many have misunderstood. From acts we read about the ascension of Jesus:

“And when he had spoken these things, while they beheld, he was taken up; and a cloud received him out of their sight. And while they looked steadfastly toward heaven as he went up, behold, two men stood by them in white apparel; Which also said, Ye men of Galilee, why stand ye gazing up into heaven? this same Jesus, which is taken up from you into heaven, shall so come in like manner as ye have seen him go into heaven.” Acts 1:9-11

People read this and they assume that the time will come that we will look to the skies and the whole world at one time will see a bright Jesus in the sky descending. No one has yet stopped to explain how both sides of the globe could see him at one time, but that’s another topic.

But let us suppose it does pertain to our day. Let us look at the ingredients: surrounding this event that we are supposed to look for again.

[2] There is no description of any great light that was seen by the whole earth.

[3] His ascension was witnessed by probably no more than a couple dozen people. In an isolated location.

If this is a correspondence of his Second Coming then what can we expect?

[1] He will be revealed as one coming forth out of a cloud, or some type of veil hiding him from our eyes.

[2] He will not come with a razzle dazzle of bright light seen by all the earth.

[3] When he left a couple dozen people witnessed the event. Thus, when he returns only a small number will at first be aware of his presence.

I do indeed believe in the coming of Christ, but I do not expect any major supernatural event preceding it. Who knows, he may begin his work by joining a discussion group like this one or starting one of his own.

Exactly how he will begin his work is not given. It is up to each of us to become spiritually prepared so we will be sensitive enough to recognize him.