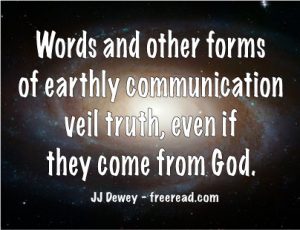 Let us continue our discussion on the Principles of discovery.

Effective Communication is an important one that falls into three categories.

(A) Communication through perception of the outside world.

(B) Person to person communication.

(C) Communication through the soul.

In the article I called “Distortions from the Past” we covered how our perceptions and memory can distort our communication into illusion.

Now, let us go to the second category – Person-to-Person communication.

If a teacher has a truth to reveal, but finds that he is unable to communicate it in such a way that his vision is perceived correctly then the truth stays with the teacher and nothing is given out. Perhaps the student through misunderstanding will decide the teacher is out to lunch and shuts off any reception that he previously had – all this because of lack of effective person-to-person communication.

Listen to any two friends have an argument. Often they are both making good points, but just don’t understand what the other is trying to say. If they could only understand perhaps they would realize that they do not disagree after all.

It is interesting that many of the arguments that have happened in this group have occurred because of lack of understanding of another’s point of view. I’d say that over half the time I spend in handling confrontations is merely spent in clarifying something that I have already said, but is misunderstood by someone out there. This seems to have intensified lately. The past couple weeks I believe I have had more of my teachings and thoughts misunderstood than any time since the group began. Thus this person-to-person communication subject is quite timely.

One of the key ingredients to effective person-to-person communication is that those attempting to so communicate use the same definition of words. This was the reason that I defined the word “channel” a while back so the group could use the word with unity of definition.

Let us pick a popular word and demonstrate how even our fairly enlightened group will have different definitions of it.

That word is LOVE.

The assignment for today: Give your definition of Love in 100 words or less.

I was expecting some interesting responses here, but I was surprised by the quantity and diversity of thought expressed by the group – all of it good and valuable for contemplation.

Now the interesting thing about love is this. When another person performs a true unselfish act of love in our direction a feeling of love is registered in our breasts. This feeling is the same for all of us.

Even though we all feel the same energy when love is registered no two of us seem to be able to explain what we felt in the same way.

Some say it is a state of mind. Others say it is a verb. Still others an emotional feeling, a creative force, the foundation of creation and even what God is.

So we have a feeling that we all register and sense in a similar way yet we all define and express it differently. It is quite possible to take two people who have felt the same energy of love yet argue about what it is because their words they chose to communicate the word veil the actual truth of the experience that both have felt in the same way.

This is the problem of communicating from personality to personality. Two personalities can take exactly the same experience yet present it in such different ways that the two will soon be swearing that the other guy has no idea what love is.

Two personalities may have a similar view of God, yet because they call Him/She/It by different names they may see the other as an enemy of such a God.

The problem with the personality is that even if two people experience or believe in essentially the same thing our filters cause us to see the other as one who is much different from ourselves.

The solution is soul to soul communication rather than personality to personality.

When there is soul to soul communication concerning love (or any other subject) why is there perfect communication even though the two may have different ways of explaining it?

How do we achieve this soul to soul communication. What are the obstacles in the path? Great thoughts to ponder that will be discussed later.

I was asked to elaborate on the overshadowing of Melchizedek and Jesus.

Question: You talked about Lucifer, but that is not a name. It is a title which also belongs to the “good guys”. Does the bad Lucifer have a name, so we can differentiate him from the others in future discussions?

JJ: Yes, Lucifer was a borrowed Roman word and is not the real name of any entity. I am not told what his name was when he came to this earth as a Kumara, but he is currently called by many names by the peoples of the earth, just as God is. DK tells us that it was not just one that fell, but two of the great ones. Let’s just call any fallen Lucifer an Adversary, for he is the adversary of free will.

The last fall happened between 18-23 million years ago, but there have been several stages in the fall.

Question: The Ancient of Days came here with a “few”. How many is a few, less than a dozen? Do we have names for any of the others of this group?

JJ: He came here with a group of six great Kumaras making a molecule of seven governing ones. Altogether, according to DK, there were 104 great ones who came from Venus to the earth with the Ancient of Days 23 million years ago. There are only three of the original ones left with the logos while others have been replaced.

Question: Were these few also giants (9′ tall) or were only the bad guys big?

JJ: The Kumaras existed in the etheric physical. The giants were advanced entities who took dense physical bodies.