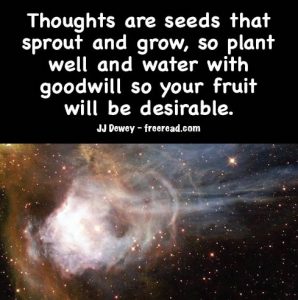 The Seeds of Life

The question: What does the term “seeds of life”, as used by DK, mean to you and what is your part in nourishing them through sacrifice?

Actually the seeds of life is a deep esoteric statement that can have a multitude of interpretations which can apply.

A reader is right that we have both the seeds of life and death within us that are nourished by our decisions.

But, what type of life are we the seed of? The answer is that each human is a seed that can grow into a Master such as was Christ. In other words, we are a mustard seed that turns into a great plant with branches that reach up to heaven and bears fruit in the kingdom of God.

Recently we have been talking about animals. What about them are the seeds of life? An animal is a seed that grows into a human. The vegetable kingdom has seeds within it that mature into animals and the mineral evolves into the vegetable.

The seeds of life begin with the nucleus of the atom. Within the atom is a life at the center hidden by veils of electrons which imprison the form.

In addition to this there is a universe of life seeds within our own bodies. Someone pointed out that we are as a god over all the living particles within us. Energy follows thought and we indeed nourish all the lesser lives within us that are seeds that will evolve within their own sphere.

It is also interesting that Jesus used this term in the Aquarian Gospel in the story of meeting the woman at the well. It is written:

“While Jesus yet was talking to the woman at the well, the six disciples came from Sychar with the food. 2 And when they saw him talking to a woman of Samaria, and one they thought a courtesan, they were amazed; yet no one asked him why he spoke with her. 3 The woman was so lost in thought and so intent on what the master said, that she forgot her errand to the well; she left her pitcher and ran quickly to the town. 4 She told the people all about the prophet she had met at Jacob’s well; she said, He told me every thing I ever did. 5 And when the people would know more about the man, the woman said, Come out and see. And multitudes went out to Jacob’s well. 6 When Jesus saw them come he said to those who followed him, You need not say, It is four months before the harvest time; 7 Behold, the harvest time is now. Lift up your eyes and look; the fields are golden with the ripened grain. 8 Lo, many sowers have gone forth to sow the seeds of life; the seed has grown; the plants have strengthened in the summer sun; the grain has ripened, and the master calls for men to reap. 9 And you shall go out in the fields and reap what other men have sown; but when the reckoning day shall come the sowers and the reapers all together will rejoice.”

They are true principles.

Somewhere in her past the woman at the well had a teacher plant the words, or seeds of life, within her. Even though this event may have happened lifetimes ago, the seeds remained and grew and matured so when she met the Master she was as a living plant which was able to receive the living rays of the sun – or Son of God.

This also illustrates the principle of sacrifice in that the teachers who planted the seeds of life saw little results in their lifetime. All they had was faith that the seeds would grow sometime in the future.

Realizing this may help us in this life. How many of us have had a child, a spouse, a friend with whom we have shared true principles with little or no effect? Take note that it is quite possible that a true seed has been planted and will bear joyful fruit in a future life.

The final part of our questions is: Is there such a thing as sacrifice as the world understands the term? Why or why not?

The answer to this is found in the first part of our discussion wherein we talked about the Principle of Re-Appropriation. That which we have seemed to have given up is re-appropriated to our benefit so we will reap what we have sown (with interest). When we realize there is no such thing as sacrifice then the sting is taken out of the process. When we obtain a realization of the true principle, sacrifice is merely like putting money in the bank.

DK hints at the idea that the Law of Sacrifice has two aspects which are a destroying aspect and a building one.

For instance he says: “It should be remembered that the Law of Sacrifice (in its destroying aspect) is dominant during the second, the third and the fourth initiations.”

Question: What is destroyed when this aspect of the law is wielded? If something is destroyed then why can we say there is no true loss?

What do you suppose the building aspect is?

What is the difference between the building and destroying aspects of the Law of Sacrifice?

I plugged my phone in where the blender used to be. I called someone. They went “Aaaaahhhh…” Steven Wright