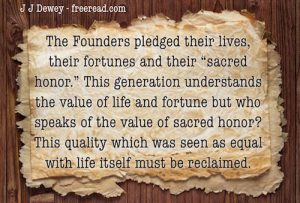 At this time of tension here in the U.S. my mind reflects back to the daring defiance of the Founders in setting forth the Declaration of Independence. When signing the document they pledged a triad of points which were, “their lives, their fortunes and their sacred honor.”

Few have considered that this sacrificial triad is indeed the mark of the true initiate and disciple who cooperates with the Brotherhood of Light. Indeed this phrase is much more than a catch phrase and represents true sacrifice to move the plan ahead.

First, they pledged their lives. This was no fanciful statement as they did indeed face at least a fifty/fifty chance that they would have to forfeit them. In addition to this was the risk of prison and torture. All but a couple were married and also placed their families at risk. This is a risk that keeps many otherwise brave individuals from facing danger.

Even though the colonies won the war a large number of the signers did indeed either forfeit their lives, their families or their own freedom and comfort.

Secondly they pledged their “fortunes.” Again this was much more than a meaningless pledge. This group was far from a band of homeless dreamers for all but a couple were very wealthy and could have lived pleasant comfortable lives submitting to the demands of King George.

It is easy to pledge your fortune when you have little or nothing, but far more difficult when one has obtained many possessions through hard work and struggle.

This is exemplified by the wealthy young man who came to Jesus.

“And, behold, one came and said unto him, Good Master, what good thing shall I do, that I may have eternal life? And he said unto him, Why callest thou me good? there is none good but one, that is, God: but if thou wilt enter into life, keep the commandments.

“He saith unto him, Which?

“The young man saith unto him, All these things have I kept from my youth up: what lack I yet?

“Jesus said unto him, If thou wilt be perfect, go and sell that thou hast, and give to the poor, and thou shalt have treasure in heaven: and come and follow me.

“But when the young man heard that saying, he went away sorrowful: for he had great possessions.

The man was willing to do anything (so he thought) to enter into the kingdom, but Jesus revealed his weakness. Alas, it was a weakness suffered by many for it is a far more difficult to risk your possessions when you have them obtained through honest labor then when you have little or nothing.

DK makes a comment on this scripture: ”Faced by the rich young man who possessed so much, Christ indicated that he needed to prepare himself for a great negation and for a step forward. The true significance of this has never been grasped and lies in the fact that the phrase “rich young man” is in reality a technical term which is frequently applied to an initiate of the third degree, just as the words “little ones” or “little child” apply to an initiate of the first or second degree. This rich young man was rich in his range of awareness, rich in his personality equipment, rich in his aspiration and in his recognition; he was rich as the result of age-long experience and evolutionary development. He is told by the Christ that he must now prepare himself for what is called in Rule V (for Disciples and Initiates) ‘the Triad shining forth’; he must now prepare for the unfoldment of the monadic consciousness and for the fourth initiation.” Rays and Initiations, Page 115-116

The scripture ends with this statement: “It is easier for a camel to go through the eye of a needle, than for a rich man to enter into the kingdom of God.”

The eye of the needle was not a needle as we understand today but an entrance to some of the cities of the day. This eye, or entrance, was too low for a camel to pass through fully loaded so to get through it the rider had to strip the camel of every possession that was upon him and then the camel had to bend to the knee and squeeze through.

In other words, for the rich man to enter into eternal life he had to be like the camel and shed himself of all possessions and bend the knee in humility before God.

But the principle is more than this. The key is not so much to shed oneself of all possessions, but to release attachment to all possessions. There will come a time in the pilgrimage of every disciple that will require him to prove this detachment in physical reality by showing a willingness to give up all that holds him to the earth. After the disciple has demonstrated this in deed he will then use judgment in obtaining and keeping that which is necessary to serve.

The signers did what the rich young man could not do. They showed a willingness to give up their fortunes. This does not mean they were all third degree initiates, but it does show they were on the Path.

The third sacrifice was their “sacred honor.” This was perhaps the most noble sacrifice of the three, but the least appreciated by this generation.

When is the last time you heard a politician, businessperson, or anyone else for that matter, refer to his honor as sacred? In fact we rarely even hear the mention of the word honor today, let alone sacred honor.

A good name and honor was very important to these men and they realized that if they lost the war that their mother country would not only take their lives and their fortunes, but publish far and wide that they had hanged a group of traitors who were the enemy of the king as well as mankind. For generations to come they could be footnotes in the history books represented as men with no honor but scoundrels of the worst kind. Their posterity yet unborn would be ashamed to claim them.

This thought of losing their honor, which they saw as sacred, was indeed troubling to their souls.

There is an interesting story which was presented by Manly P. Hall in his 1944 book “The Secret Destiny of America” supposedly taken from May 1938 Theosophist magazine wherein a mysterious stranger appeared to the signers urging them to place their signatures on the document. After this he mysteriously disappeared. Some believe this was St. Germain. Others think the story is a fabrication. Whatever the case the words are inspiring.

Faced with the death penalty for high treason, courageous men debated long before they picked up the quill pen to sign the parchment that declared the independence of the colonies from the mother country on July 4, 1776. For many hours they had debated in the State House at Philadelphia, with the lower chamber doors locked and a guard posted.

According to Jefferson, it was late in the afternoon before the delegates gathered their courage to the sticking point. The talk was about axes, scaffolds, and the gibbet, when suddenly a strong, bold voice sounded–”Gibbet! They may stretch our necks on all the gibbets in the land; they may turn every rock into a scaffold; every tree into a gallows; every home into a grave, and yet the words of that parchment can never die! They may pour our blood on a thousand scaffolds, and yet from every drop that dies the axe a new champion of freedom will spring into birth! The British King may blot out the stars of God from the sky, but he cannot blot out His words written on that parchment there. The works of God may perish; His words, never!

“The words of this declaration will live in the world long after our bones are dust. To the mechanic in his workshop they will speak hope: to the slave in the mines freedom: but to the coward kings, these words will speak in tones of warning they cannot choose but hear.

“Sign that parchment! Sign, if the next moment the gibbet’s rope is about your neck! Sign, if the next minute this hall rings with the clash of falling axes! Sign, by all of your hopes in life or death, as men, as husbands, as fathers, brothers, sign your names to the parchment, or be accursed forever! Sign, and not only for yourselves, but for all ages, for that parchment will be the textbook of freedom, the bible of the rights of man forever.

“Nay, do not start and whisper with surprise! It is truth, your own hearts witness it: God proclaims it. Look at this strange band of exiles and outcasts, suddenly transformed into a people; a handful of men, weak in arms, but mighty in God-like faith; nay, look at your recent achievements, your Bunker Hill, you Lexington, and then tell me, if you can, that God has not given America to be free!

“It is not give to our poor human intellect to climb to the skies and to pierce the Council of the Almighty One. But methinks I stand among the awful clouds which veils the brightness of Jehovah’s throne.

“Methinks I see the recording Angel come trembling up to the throne and speak his dread message. ‘Father, the old world is baptized in blood. Father, look with one glance of Thine eternal eye, and behold evermore that terrible sight, man trodden beneath the oppressor’s feet, nations lost in blood, murder, and superstition, walking hand in hand over the graves of the victims, and not a single voice of hope to man!’

“He stands there, the Angel, trembling with the record of human guilt, But hark! The voice of God speaks from the awful cloud: ‘Let there be Light again! Tell my people, the poor and oppressed, to go out from the old world, from oppression and blood, and build my alter in the new.’

“As I live, my friends, I believe that to be his voice! Yes, were my soul trembling on the verge of eternity, were this hand freezing in death, were this voice choking in the last struggle, I would still, with the last impulse of that soul, with the last wave of that hand, with the last gasp of that voice, implore you to remember this truth–God has given America to be free!

“Yes, as I sank into the gloomy shadows of the grave, with my last faint whisper I would beg you to sign that parchment for the sake of those millions whose very breath is now hushed in intense expectation as they look up to you for the awful words: ‘You are free.’“

The unknown speaker fell exhausted into his seat. The delegates, carried away by his enthusiasm, rushed forward. John Hancock scarcely had time to pen his bold signature before the quill was grasped by another. It was done.

The delegates turned to express their gratitude to the unknown speaker for his eloquent words. He was not there.

Who was this strange man, who seemed to speak with a divine authority, whose solemn words gave courage to the doubters and sealed the destiny of the new nation?

His name is not recorded; none of those present knew him; or if they did they did, not one acknowledged the acquaintance.

How he had entered into the locked and guarded room is not told, nor is there any record of the manner of his departure.

3 thoughts on “The Sacred Triad”