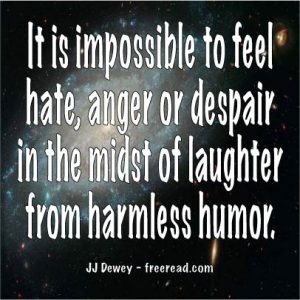 The Sabbath of Laughter

I would like to add two more measures to the previous eight that can be taken in defeating negativity or dark forces.

(9) Laughter. After contemplating this principle I sense that there is more to this than meets the eye and that we can use laughter for positive results unrealized.

There have been a few people who have used laugher as a means to aid with healing, but using it to dispel darkness and negativity is perhaps a new twist.

A reader made the comment that maybe when we get down and out and there’s no where to go but up that a good laugh will propel us in the desired direction.

Think of it. What actually happens when we laugh? How do you feel when you are actually in the act of joyous laughter?

No matter how negative you felt the instant before, no matter what your stress or pain, it all seems to disappear during the time of the actual heartfelt laughter.

In a way laughter is like a Sabbath of rest from all the cares and concerns of life. It is also interesting that one of the promises of God to the faithful in the scriptures is to “enter into his rest.”

Is it possible that laughter is a method of entering into the rest of God while still living upon the earth?

Let us, my friends try an experiment during the next month and laugh at the following:

(A) Any situation that distresses you.

(B) Any negative feeling that bothers you

When you laugh, just do not make the sound thoughtlessly, but actually laugh at the negativity you wish to disappear. This will send a message through your soul that you do not recognize the negative and will call forth the magical power of the Spirit to move you one additional step toward creating heaven on earth.

Here’s an interesting quote from DK on the subject:

“One is to cultivate the ability to “sit light in the saddle” (to use an old proverbial injunction) and the other is to develop a sense of humour, a real (not forced) capacity to laugh at oneself and with the world. This is one of the compensations which comes to those who can succeed in working in the light upon the mental plane. When you can do this, the constant tension under which you labour will adjust itself.” Discipleship in the New Age, Vol 1, Page 414

(10) Create a positive affirmation. In addition to saying the Song of the 144,000 you can write a personal affirmation geared to your own situation. You can either say it to yourself during the day or make yourself a tape and listen to it regularly.

“Every day in every way I am getting better and better,” is a popular, but short positive statement.

I’ve read one account that said the ancient Hebrews believed the world was flat, and that a literal translation of the Hebrew word from which firmament was translated, was a dome — and that they believed the sky was a dome, whose ends rested on the mountains, on which the stars, etc. were placed. Even if that were so (and personally, I give the Hebrews more credit than that) … the other and bigger issue STILL is … where is the water ABOVE the firmament??????

An ocean floating in space?

JJ: Yes, the Bible clearly says there are waters both above and below the firmament.

The word “firmament” comes from RAQIYA which literally means “expanse.” Some believe it referred to a dome, but others feel it merely refers to our atmosphere.

Thus you have waters above and below the atmosphere. The waters below are obvious – the oceans, rivers, lakes etc. But what are the waters above? One interesting theory I read stated that before the days of Noah the earth had rings like Saturn composed of frozen water and the flood was caused by the descent of these rings. If there were such rings then there would have indeed been waters above the atmosphere.

My thought is this. Many of the ancients had little knowledge of space and when they looked up at the sky they saw it was blue like a great body of water and thus many thought that somewhere beyond the air we breath is a universal body of water.

This is not entirely untrue for some ancient writings call the invisible ethers of space, “waters” that give birth to all there is and from this vantage point there are indeed waters above the atmosphere.

I have just a few minutes tonight so I thought I would pose a question.

I notice that all those of the Islam faith are adamant about wearing a covering over their head so I figured there must be some commandment on it in the Koran. I therefore, did a search and instead of finding a demand that they wear a covering I found the opposite. Let me quote:

10: 27. For those who do good deeds, there shall be the best reward and yet more blessings. And neither darkness nor ignominy shall cover their faces. It is these who are the inmates of Heaven; therein shall they abide.

10: 28. And as for those who do evil deeds, the punishment of an evil deed shall be the like thereof, and ignominy shall cover them. They shall have none to protect them from ALLAH. And they shall look as if their faces had been covered with dark patches of night. It is these who are the inmates of the Fire; therein shall they abide.

Her they are commanded that “darkness” shall not cover their faces and that the evil ones are “covered with dark patches of night.”

11: 6. Now surely, they fold up their breast that they may hide their evil thoughts from HIM. Aye, even when they cover themselves up with their garments, HE knows what they hide and what they reveal. Surely, HE knows full well what is in their breast.

Again, covering themselves up with garments does not sound like a positive thing.

Is it possible that the idea of covering themselves so much is as much of a distortion of Islam as handling snakes would be for Christians?