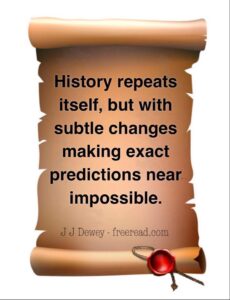 The Root of the Problem

Contemplating any train of thought and bouncing it off another with different beliefs will normally yield some light and knowledge of some sort. The real question is as to whether the time spent on a detour is as productive as the pre-established road. Sometimes it is and other times it is not.

What is interesting about the recent argument is that it is one of the few that has not been presented before. In a way this is odd because many new agers believe that everything is preplanned. If something unusual happens to them you will often hear them say, “Well, I guess it was just supposed to be.” On the other hand, I’ve never met one that wants to argue the subject or even present logical reasoning as to why they believe this to be true.

While it is true that there are some things that are supposed to be, because they have already been decided, there are many things not decided in advance that happen just because we made them happen through free will.

To resolve any argument, one has to first discover the core difference and deal with it. Dealing with the branches, as we have been doing, never leads to resolution, but sometimes the branches lead to the root.

Here is the root of the problem.

Our friend believes that all springs from infinity. He doesn’t make clear whether he means God, Infinite intelligence or what, but he does tell us that infinity has every detail that has ever happened or will ever happen in the universe all constructed and that it is here now. It is set and cannot be changed. Everything in infinity has already happened.

Within this construct he says we have free will and choice, but it just so happens that whatever we choose is exactly, to the smallest detail, what has already predetermined in infinity.

He maintains that a cause cannot cause itself. This is logical to a degree, but something caused our extremely complicated DNA to manifest. Was it a causeless cause or a cause, causing itself?

That which is responsible for all creation is either a cause causing itself to do things or a causeless cause. Which is it?

When we look at creation we think we are looking into the present. By normal definition this is true and I also use the word present for simplicities sake.

The truth is we never see the present, but always see the past. The past is the only thing that can be registered by our consciousness.

Consider this, that it takes about a 64th of a second to pass for us to be able to perceive that any event has occurred and within this quantum of time lies an eternity as taught at the end of my book, Eternal Words.

It takes about a second of time to pass for us to be able to consciously register that any event has occurred. It was not by accident that the ancients gave the smallest unit of time as a second. We can perceive things more quickly than a second, but registering them is another matter.

Now what would happen if we were able to perceive all things and saw the true present? What would we see?

The answer is we would see nothing?

Because all form is caused by motion and that which seems solid is not solid but caused by other motions of wavelengths. If all motions of all waves were stilled there would be nothing to see. This would be the true present.

But would there be nothing? Is all this form created from nothing?

As far as something in the way the world thinks of as something, all is created from nothing. But the world does not realize within that which we call nothing, lies something and that something is the Original Cause behind all there is.

Within this Original cause is Decision, Intelligence and Purpose manifesting through an eternal interplay of cause and effect.

Divine Purpose created from its essence the illusion of the wavelength and from wavelengths it created all form, time and space.

If all creation were the result of simple multiplication of Original Cause, then a high degree of predictability of even small details would be possible. But because Original Cause is duplicated and endowed with intelligence and free will, the future is not set in many of its details. The unpredictability of many future events is not caused by randomness, but it’s opposite. It is caused by intelligent intervention to create that which is not random. The direction of an intelligent decision can often not be predicted in advance. An intelligence coming to three paths of equal value will often pick one for reasons that even it did not know in advance.

Entropy is cause playing itself out without the interference of outside intelligence. A radioactive element can thus disintegrate and its stages of decay are close to 100 percent predictable until intelligence is applied to change its makeup. How and when the intelligence is going to be applied, or the creative process, is not predictable as is the process of decay.

Intelligence, free will and purpose are not predictable in detail because they exist outside the illusion of time and space yet create all the causes in time and space. They are masters of form and originate new cause. Existing cause can be measured and the effects known but all the manifestations of intelligence that will initiate cause cannot be measured, nor predicted.

The future is much like the present, only longer. Dan Quisenberry