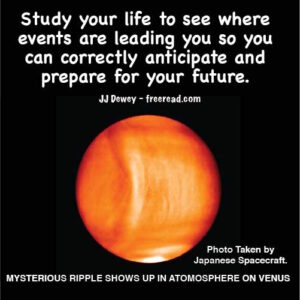 Some are still insisting the future is exactly set. One reader tells us that predictive astrology proves this.

I have studied astrology and even did it professionally for a while. You can only predict cycles and influences, but rarely the details. And when using predictive astrology, it only works consistently with average people. As DK says, it does not work well with soul infused people because they have a more advanced power of decision and are not so predictable as to how they will respond to influences.

Then the reader mentioned the prediction by Jesus of the betrayal of Peter denying him and says “If one thing can be predicted with certainty. All things can be.”

Not so. I can and have predicted the decisions of many people including some of yours (privately to myself). You can predict some of mine, such as whether I will respond to a post, but you cannot predict them all because many are not decided yet. The future is the future and only generalities are available to us in the present.

A Master can make some amazing predictions, but still cannot see all things.

The apostle Paul thought the end of the world was coming in his age and he was a high initiate.

If one knew all the forces at play in the sea, earth, moon, sun, planets, ethers and air one could watch the seashore and predict with a massive computer many of the effects that would transpire.

Imagine such a one spending a lifetime programming data into his computer and then watching with some smugness some of his predictions of effects coming true.

He is proud of himself until a child comes along and DECIDES to build a sandcastle. The computer prophet panics. First there was no data in his computer that could predict the time of the child’s arrival. Secondly, he is frustrated about the type of castle the child will decide to build.

As the child starts to build the man attempts to predict exactly what the structure will look like. As he is in the middle of doing this the child gets up with his pail and walks a few feet to an area where there is white instead of brown sand. He fills his pail with this and begins to enhance the beauty of his castle with a different colored sand.

The man is beside himself. “What could I have ever put in the computer that would have told me that the kid would get up, move to another spot and select a different type of sand to decorate his castle?

If a great computer programmer and mathematician cannot predict subtle decisions of a child, then how much more impossible would be the predicting of the decisions of a disciple or a master?

Reality does not support the predestination view. If it did then at least one person out of the billions of people on the planet could read tomorrows newspaper today. They could even read a paper from a billion years into the future.

Whycling to a belief that cannot be demonstrated or have any effect outside of being a distraction from the reality in which we find ourselves?

We might take note that big supporters of this belief  are astral channelers. The Masters of Wisdom have never said anything that I recall that supports it but have always placed great emphasis on free will and becoming masters of our destinies.

Here is an interesting quote from Madame Blavatsky:

“Only, the closer the union between the mortal reflection MAN and his celestial PROTOTYPE, the less dangerous the external conditions and subsequent reincarnations — which neither Buddhas nor Christs can escape. This is not superstition, least of all is it Fatalism. The latter implies a blind course of some still blinder power, and man is a free agent during his stay on earth. He cannot escape his ruling Destiny, but he has the choice of two paths that lead him in that direction, and he can reach the goal of misery — if such is decreed to him, either in the snowy white robes of the Martyr, or in the soiled garments of a volunteer in the iniquitous course; for, there are external and internal conditions which affect the determination of our will upon our actions, and it is in our power to follow either of the two. Those who believe in Karma have to believe in destiny, which, from birth to death, every man is weaving thread by thread around himself, as a spider does its cobweb; and this destiny is guided either by the heavenly voice of the invisible prototype outside of us, or by our more intimate astral, or inner man, who is but too often the evil genius of the embodied entity called man. Both these lead on the outward man, but one of them must prevail; and from the very beginning of the invisible affray the stern and implacable law of compensation steps in and takes its course, faithfully following the fluctuations. When the last strand is woven, and man is seemingly enwrapped in the net-work of his own doing, then he finds himself completely under the empire of this self-made destiny. It then either fixes him like the inert shell against the immovable rock, or carries him away like a feather in a whirlwind raised by his own actions, and this is — KARMA.” Secret Doctrine, Vol. 1, Page 639

Then a reader quotes this as proof of predestination:

The first problem here is he have used a quite distorted translation. I don’t know what version he is using, but it is obviously made to be easy reading and not for accuracy. The King James, which has its faults, is much more accurate.

There are two words here that help us understand what Solomon is saying which are “season” and “time.”

Season comes from the Hebrew ZeMAN

“To every purpose” comes from, CHEPHETS and has little to do with purpose. It implies a pleasurable desire or activity–or that which is important to us. The verse is basically saying that there are cycles and times within which all that we consider important occurs.

Then he goes on to tell us that there is a right time and a place for everything of importance in the lives of men to occur.

I’ve quoted this scripture many times, as it supports my teachings that there is an exception to every rule and a time to act contrary to the norm.

The odd translation quoted adds in words that are not in the Hebrew such as “happens at the time god chooses,” “he sets,” and “he has set…” Obviously the translator believed in predestination, and this caused his biased translating.

This is evident in this verse quoted:

“He has set the time right for everything. He has given us a desire to know the future, but never gives us the satisfaction of fully understanding what he does.”

Let us go through this and come as close as we can to the true meaning.

”He has set the time right for everything.”

This is way off. The old King James is much closer, “He hath made everything beautiful in his time.”

Reader’s translation: “He has given us a desire to know the future, but never gives us the satisfaction of fully understanding what he does.”

The King James version reads: “he hath set the world in their heart, so that no man can find out the work that God maketh from the beginning to the end.”

Neither one of these is that accurate as a key word is mistranslated in both of them. The Hebrew OWLAM is translated “future” in the quote and “world” in the King James. It is most often rendered as “everlasting” and implies, not so much eternity, as a long period of time or perpetual.

So what is this verse really saying? Here is how I would translate it:

“He has given man a sense of his immortality in his heart, but even so he cannot discover the beginning or end of God’s works.”

Finally, this scriptures is stressed as proof of predestination:

“Whatever happens or can happen has already happened before. God makes the same thing happen again and again.” Verse 15

This scripture merely elucidates the general principle of cycles as used in the modern truism, “history repeats itself.”

I’m surprised you did not quote this one:

Each scripture must be examined in its context as well as in relation to other scriptures and, most of all, with the spirit within through the soul for no written word is infallible.

For instance, other scriptures talk of new things under the sun:

* And he that sat upon the throne said, Behold, I make all things new. Revelation 21:5

* Behold, I will do a new thing; now it shall spring forth; shall ye not know it? I will even make a way in the wilderness, and rivers in the desert. Isaiah 43:19

* For, behold, I create new heavens and a new earth: and the former shall not be remembered, nor come into mind. Isaiah 65:17

Indeed there are cycles where history repeats itself and then there are “new” things which are not an exact repeat.

“It is wise for human beings to realise that mankind is free. Even the Hierarchy Itself does not know which forces-those of good or those of evil-will ultimately prevail because even if the forces of good triumph where the war is concerned, will they triumph where the peace is concerned? Good must ultimately triumph but the Hierarchy does not know what the immediate future holds for humanity because men determine their own destiny.” Discipleship in the New Age, Vol 1, page 74

Then we have this: “I have now definitely decided to disband the New Seed Group. My experiment in reorganising the earlier groups into one large group has not succeeded. I have told you frequently that the Hierarchy itself does not know what decisions humanity will make in world affairs, or if mankind will profit from proffered opportunity. Equally so, the Master of an Ashram does not know what “disciples on the periphery” of an Ashram will do, because their training and testing is only in process.”

While it is true that there are complexities to time and space (of which I have written much) we must not ignore the reality which is right in front of us.

As DK says: “It is wise for human beings to realise that mankind is free… The Hierarchy does not know what the immediate future holds for humanity because men determine their own destiny.” Discipleship in the New Age: Vol I, Page 74