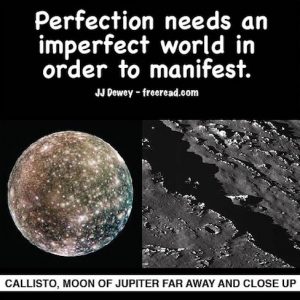 Samu continues to give some great answers here so we’ll pick on him again. Keep in mind here we are talking about the universe in the physical reality.

JJ: Now the big mystery among scientists is this. The universe is expanding and they are amazed that each galaxy is moving away from every other galaxy at a uniform speed.

Question: Could this correspond to growth of a living body.

Samu: Indeed it could. At embryo stage cells first grow in size, after which they grow in number. When the cells are ‘old enough’, they specialize to play their part in a specific organ performing a certain bodily function, joining with other cells with same vision, much like human beings finding their place in society and groups after they’ve grown up. I don’t see why it would be any different for galaxies within the universe, looking for their special spot.

Good answer Samu. You are using the Law of Correspondences here.

The big question among scientists is whether or not the universe will ever cease expanding or just expand forever.

Using the Law of Correspondences what would the answer be?

Samu: The human body grows in physical size until it reaches adulthood, then the development takes place on other dimensions of existence, inner spheres expanding. We start forming relationships, become intimate and interactive, so to speak. This would indicate that the universe ceases expanding physically one day, after which it starts developing its head and heart qualities, and starts associating with other universes over time. This is an interesting thought, because I used to think the physical expansion too was never-ending. Hmmmm. I guess then that would only be if our universe planned on becoming over-weight, one pound at a time; Before the end of a human lifetime, most of us give birth to offspring. Correlate this to universal life… Very interesting.

JJ: Earlier we talked about what would stop the expansion of the universe. Can you remember what it is and what this corresponds to in the atomic universe?

Question: What does this tell you about the association of one universe with another?

Samu: That it’s very loose at this stage of development. Like being aware of the existence of each other, without knowing what the relationship really consciously could mean in all of its possibilities. I can sense somebody being out there, but who and why? Got to find out whos and whys of oneself before it makes sense to reach out ones hand in order to offer friend and partnership, ya know 🙂

JJ: Let me add this. We concluded that according to the Law of Correspondences the universe is in its infancy.

Now the distance from our solar system to even the nearest star boggles the mind. It takes light just a couple seconds to reach the moon, a little over eight minutes to reach the sun, but four and a half years to reach Alpha Centauri our nearest neighbor.

Now on a higher scale we are a dot in the Milky Way galaxy which has up to 400,000,000,000 solar systems and the distance to our nearest galactic neighbor boggles the mind even more. The nearest galaxy to us takes light over a million years to reach us.

Now the Hubble telescope has spotted galaxies about 20 billion light years away. This is causing scientists to recalculate the time of the Big Bang which they thought was only 14 billion years ago,. I submit that the universe may be much bigger and older than scientists believe.

Now let us suppose we could go to the edge of the universe and look out in the void. What would we see?

Two reasons. First the nearest universe would be so far away it would only seem a dot at best.

Secondly, the nearest universe would be so far away that it’s light could virtually never reach us. All the universes in the greater universe would come and go a thousand times before light could ever be received. That would be how vast the distances would be by the Law of Correspondences.

Thus we see that through the use of this Law that the universe is an infant very alone in a great void receiving no physical light from any source. As it grows to self awareness it’s first external question will be: “Am I alone?”

Correspondingly this is the question mankind is now asking. Are we alone? Are there any other intelligent species out there amidst the billions of star systems?

Question: Why is it that we are not a pimple on someone’s giant nose as some think?

No one answered this yet. Any guesses?

Does the Law of Correspondences suggest that there is a certain number to all things including the worlds within the universe of universes? Could that number be the true number for pi?

How many galaxies can I fit in a universe with the volume of xyz? Or is there a constant number, a natural constant, for the distance between galaxies that they gravitate towards? But I still can’t see how 3,141592654 could somehow be connected to the number of worlds? Maybe I’m misunderstanding something here. Could you please elaborate JJ?

JJ: As I was writing about this subject the number for pi flashed in my mind. I realize this number is produced by dividing the circumference of a circle by its diameter and at first glance does not seem to have any cosmic significance. On the other hand, the circle is the one constant symbol that reappears everywhere in creation. Therefore this one constant number that comes from the circle could be some type of final number. It could be something like the number of atoms within the universe itself.

Super computers have figured this number out to a million digits and still haven’t arrived at the final one. Here are the first thousand or so digits.

Remember that there are about a million more digits discovered and still mathematicians have not discovered the final pi.

Think on this. If God is ever to create a perfect circle then He would have to have the exact number for pi, for without it a perfect circle is impossible making the perfection of God impossible. It would be fitting that this ultimate number of perfection was also the number of particles in creation. This would correspondingly mean that there is the perfect number of atoms in existence.

Question from yesterday: Now everyone says that the number of creations are infinite, but because everyone believes this does not make it true.

Does the Law of Correspondences suggest that there is a certain number to all things including the worlds within the universe of universes?

Now this question may throw some for a loop, but bear with me and consider that which you have not considered before and that is that the universe may not be infinite.

How could it be that the universe does have a specific number of worlds and particles yet to us would seem infinite to the extent that we could never find the end even if we traveled as fast as thought?

This brings us to the next principle of discovery which I will state early.

The world believes the universe in infinite. Let us question this.